Exhibit A for why you should always wear an undershirt.

From media reports, Kawhi Leonard has long seemed like a different kind of dude. For one, he’s insanely quiet. He’s not the Bobby Bonds-type, though, who just doesn’t talk to the media because he was burned early in his career. Leonard is the kind of quiet that is not often seen in a celebrity or quasi-celebrity – Leonard is famous, though he would prefer not to be. But Kahwi is even quiet with teammates and friends. He just loves basketball. He doesn’t showboat on the court, he doesn’t get vocal with teammates or coaches. As his coach Greg Popovich says:

“When Kawhi makes a mistake, he’s almost apologetic….he doesn’t want to disappoint anybody. There are times he does something well, and I have to tell him, ‘That was super. That was fantastic. That was a helluva job. You can smile now. You can feel great about yourself….If I bring him out too early, for example, he’ll go like this”: Popovich curls up one side of his lip. “What he’s saying is, ‘Pop, why the f— are you bringing me out so early?’ but he’d never actually say that. So I tell him, ‘I’ll get back to you,’ and he nods and sits down.”

That’s rare for a player who has quickly become a superstar. Kawhi seems like a good dude. And thanks to 123 reader Jamie Morganstern for the anonymous submission. -TOB

PAL: Sure, he wants to be great and doesn’t care about being a star. Sure he lives in a 2-bedroom apartment with his mom even though he just signed a $96M contract. All that good stuff. My favorite part of the story: He drives a 1997 Tahoe and freaks out when he misplaces his Wingstop coupons.

After a 12-year career, Adam LaRoche is retiring from baseball, and not because he hit .207 last year as an aging vet. He’s retiring – and walking away from $13M  – because the White Sox asked him to maybe not bring his son to the field every single day. No, seriously, every day. Who has to ask an employee to not bring the kids around work every day? You won’t read anything about it, but I bet my next paycheck there are a bunch of players at White Sox spring training thanking management. Also, this picture is so stupid. “Okay, LaRoche guys,” the photographer says. “Let’s get one with you walking under the passion, pride, and tradition bullshit. Yeah, perfect.” – PAL 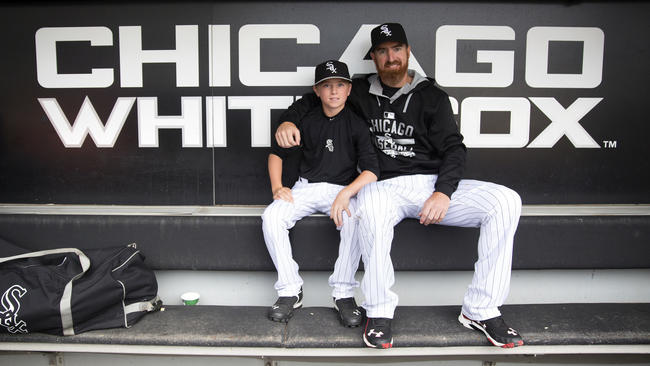 Source: “Adam LaRoche Retired Because The White Sox Wouldn’t Let His Kid Hang Out In The Clubhouse Every Day”, Samer Kalef, Deadspin (03/16/2016)

TOB: I was really, really, really hoping Phil would have the opposite reaction to this story so that we could have had a really nasty debate. The best part is that I’m sure that White Sox management are high-fiving this week. They don’t have to pay a terrible, old baseball player $13M to hit below the Mendoza Line simply because they asked him to act like a professional and leave his child at home half the time. This was GM Kenny Williams this week:

And as usual, Grant Brisbee comes with a funny take.

This is hilarious. The head coach of every team in the NCAA Tournament was asked to name his favorite band/musical artist. Some of the results are hilarious. I don’t think I ever would have imagined Kansas’ Bill Self grooving to Luther Vandross. But now I cannot get that image out of my head. John Mayer? I knew you sucked, Sean Miller. Tad Boyle (Colorado) – MY MAN. My favorite, though, might be this:

PAL:  I heard Dave Grohl say on Marc Maron’s podcast that he doesn’t believe in guilty pleasures when it comes to music. I’m editing here, but the gist of it goes something like this – if you like something, like it. That’s what’s wrong with our generation: that residual punk rock guilt…I would agree with this, except for the following instance: Vanderbilt’s coach Kevin Stallings listed Vince Gill as his favorite. GUILTY of horrible music taste. Unforgivable.

Ever heard of “multi-level marketing”? It’s when the sales force is not only compensated for sales, but also for the sales of the other folks they recruit. Amway is built on multi-level marketing, and so is AdvoCare, a company which utilizes several athlete endorsements and boasts a workforce of over 640,000 employees, none more central than Drew Brees. The issue: Many multi-level marketing business models straddle the line of a pyramid scheme, which is illegal. This breakdown reminded me of this incredible This American Life episode about a similar company. The odd thing about some of these companies is how they mimic, well, cults, and oftentimes have a strong religious component at its core, never mind the fact that IT’S A SCAM.

Also at its core is the fact the the vast majority of money comes from recruiting new members and not from selling the products. The sporting connection – AdvoCare really jumped on the athlete endorsement train early. My problem is that, unlike endorsing shoes or a soda, Brees lends his the face of something that misleads folks in a way that can have devastating financial results. Some of the more interesting nuggets below. – PAL

Halfway through CBS’ bloated, 2-hour NCAA Tournament Selection show on Sunday night, a leaked, complete bracket began circulating on Twitter. Multiple coaches said that they learned their team’s fate from text messages and Twitter upwards of an hour before CBS officially announced the matchup on TV. Oh, the glory of the modern age. For kicks, here’s a look back at an article from 2014 (B123E – Before the 1-2-3 Sports Era) on how the NCAA is so gosh darn effective at preventing such a leak. It’s actually pretty intense, with the Selection Committee members being sequestered on one floor of a hotel for 5 days, with no cell phones, all meals served in a conference room, etc., and outsiders not allowed to enter that floor. -TOB

Source: “How the NCAA Prevents Bracket Details From Being Leaked Before the Selection Show Airs”, Jeff Eisenberg, Yahoo! Sports (03/12/2014)

PAL Song of the Week: Crooked Fingers – “Went To The City”

Check out all of the weekly picks here. It’s like 100 million Shining Moments