Listen, I don’t know nearly enough to form an educated opinion on whether or not President Obama should have been the first U.S. president in 90 years to visit Cuba. The trip was centered on an exhibition game between the Tampa Bay Rays and the Cuban National Team. Some will contend it is an initial step to begin engagement with Cuba; while others will see it as him embracing a murderous dictator. At the very least, we should take a moment to take read Dan Le Batard’s column on the matter. For him and his Cuban exile parents, this is very much a personal story. When I try to put myself in his shoes, I just don’t know how I would feel any other way but the same as him. Here’s a snippet below, but be sure to read the entire column. – PAL

“I’ve never known anything but freedom. My grandparents and parents made sure that was so. Now my grandparents are dead, and my parents are old, and the Cuban regime that strangled them somehow lives on … lives on to play a baseball game with our country this week. America extends its hand toward a dictator who has the blood of my people on his own hands. And now my parents, old exiles, have to watch Obama and Jeter and ESPN throw a happy party on land that was stolen from my family — as the rest of America celebrates it, no less. That’s going to hurt, no matter how you feel about the politics.”

TOB: I get LeBatard’s emotion. But I can’t see how lifting the embargo will be anything but a good first step. The embargo has caused so many innocent people to suffer. Hopefully tourism, at the very least, will bring an influx of cash to Cubans who desperately need it. However, I must say this: I watched the pregame ceremonies and the first few innings. ESPN needed to chill out a bit on the Baseball (and by extension ESPN) as Savior thing. I mean, my goodness. That was some overwrought, jingoistic crap. I liked this quick read by Yahoo! Sports’ Tim Brown on the subject.

Steve Kerr Offers a Little Love for Cal Basketball, Which Badly Needs It

It is not hyperbole to say that Cal basketball endured one of the worst weeks a college basketball program can ever suffer, absent a tragedy. A quick recap: On Sunday, March 13th they were given a 4-seed in the tournament, the highest ever for Cal. The next day, Monday, it was announced that assistant coach Yanni Hufnagel was fired, effective immediately. On Tuesday, it was announced that he was fired for sexually harassing a female reporter. On Wednesday, the report was released and it was bad. Also on Wednesday, Tyrone Wallace, the team’s senior starting point guard broke his hand in practice. On Friday, moments before their opening round game against Hawaii, starting shooting guard Jabari Bird was ruled out due to a back injury. Cal then went out and lost to Hawaii. If you thought that was the end, you’re wrong. By Friday, rumors swirled that head coach Cuonzo Martin was under investigation for his response to complaints by the reporter about Hufnagel. And then over the weekend, Tyson Jolly, a 4-star recruit set to enroll at Cal in the fall, asked and received a release from his Letter of Intent (Jolly was close with Hufnagel). That was exhausting to type.

So, damnit, I am taking this opportunity to highlight what a nice thing Warriors head coach Steve Kerr did this week. Kerr’s son, Nick, played basketball at Cal this year as a 5th year graduate transfer (he had previously played at USD). Kerr tweeted some kind words about Coach Martin and the Cal program. And when asked about his tweet, Kerr said:

“My son was a walk-on there this year. He had an incredible experience with his teammates, with the coaching staff, with Cuonzo. I wanted to say thanks for the season that Cal had and for the experience that my son had. All I wanted to vouch for was his character. He’s been an incredible mentor for my son, phenomenal coach, and I just wanted to say thanks for that. I know that the program is going through some turmoil with the issue that’s happening. … I just know from my son and getting to know Cuonzo what kind of person he is, and I wanted to support him.”

*sniff sniff* That is why I can’t quit you, Steve. -TOB 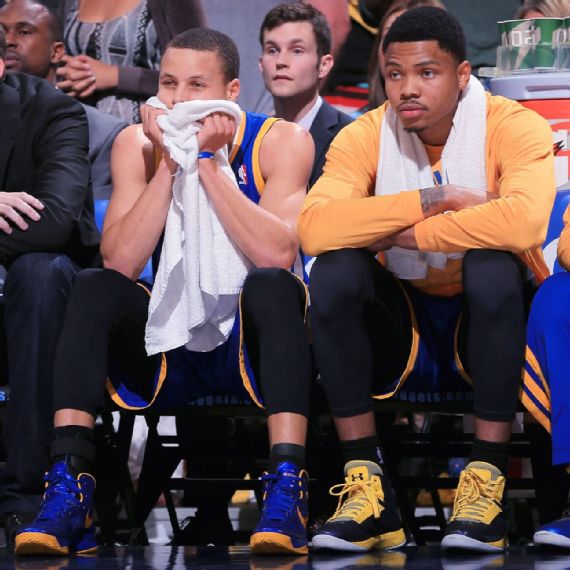 How do Davids slay Goliaths? Something extraordinary happens. Something transcendent occurs, and a strength becomes a weakness. I don’t care who makes the shoes Steph Curry wears (Under Armour), but the circumstances that led to him choosing UA over Nike says a lot about how the game is changing, the dream Nike has sold us for decades, and how Curry is very much like Michael Jordan when it comes to his place in pop culture.  While this story has a funky structure, it’s an enthralling look behind the scenes of a multi-billion dollar sports heist.  of the century. This is the story of how Nike, which holds 95.5 percent of the basketball sneaker market (2014) lost out to a company with less than 1 percent market share on the next transcendent talent in basketball, and the pivotal role a 10-day contract player had in pulling it off. Some of my favorite nuggets below. – PAL

The Continuous Evolution of Sabermetrics

PAL: I typed in “SABR nerd”, and this is what came up. Perfection.

If you like baseball, this is an article you should read. At this year’s SABR Analytics Meetings, Sabermetricians discussed how new advanced measurement tools (notably Statcast, which we here at 123 Sports love) have unlocked a whole new treasure trove of baseball data. One such advance is the ability to record the “exit velocity” of a batted ball, and how that affects how Sabermetricians value a pitcher. As the article notes, FIP has long been a sacred cow for Sabermetricians. And while I like sabermetrics, FIP has never sat well with me. FIP is pretty simple. It stands for Fielding Independent Pitching and it measures a pitcher’s at bats that end in a strikeout, a walk, or a home run. That’s it. All other batted balls are not valued. The theory is that once a ball is in play, the outcome of that play is dependent on the pitcher’s defense, not on the pitcher, and they are hoping to isolate a pitcher’s true abilities vs clouding that data based on how good the defense is behind him. FIP never sat well with me because…if I’m throwing up meatballs that the offense is turning into line drives, that’s a lot more difficult to field than a pop fly or a grounder. And shouldn’t that be my fault as the pitcher? As the article discusses…yes. Now that they can reliably measure the exit velocity of each batted ball, they can understand better what batted balls were a lot more difficult to field. So, don’t get too attached to FIP. It might not be around too much longer. -TOB

PAL: I’m worried, folks. My last social media app was Twitter, and now I fear I’m becoming a baseball fan who hates new stats. FIP? Exit velocity? What the crap, man. Back in my day–dammit! See, it’s happening, and I can’t control it.

TOB: Exit velocity is pretty straightforward, Phil! Btw, the wife and I watched a truly excellent episode of HBO Real Sports this week, and I highly recommend it. All three stories were great – the sexual harassment/assault allegations over the years against Kevin Johnson, Mavericks, and Craig Sager’s ongoing battle against cancer. Find it and watch it. I mention this here because Bryant Gumbel closed the episode with an old man rant against sabermetrics that even had the wife rolling her eyes. Don’t be like Gumbel, Phil.

PAL Song of the Week: A Tribe Called Quest – “Steve Biko (Stir It Up)”

Check out all of the weekly picks here. It’s all over the place.