Wednesday in the Bay Area.

Bless you, Larry Bird. I am so, so tired of retired athletes grousing about how their sport was so much better back in their day. This is especially true in basketball, where for whatever reason each generation increasingly seems to feel that succeeding generations are garbage. Recent examples making news include Oscar Robertson and Scottie Pippen. The 2015-16 Warriors (RIP?) seemed to especially be a lightning rod this season – attracting old basketball player criticisms like flies to shit. Enter Larry Bird – NBA Hall of Famer, one of the five to ten greatest players of all-time.

Yes, that Larry Legend singing the praises of the modern NBA, as not only high quality of play, but entertaining, too.

“It’s funny how the game has changed, and my thinking about it. I was really worried—back sixteen, seventeen years ago—that the little guy didn’t have a spot in the N.B.A. anymore: it was just going to be the big guards like Magic Johnson. But then players started shooting more threes and spacing the court, and everyone wants small guards now. Watching these kids play now, I’m like everybody else: Wow, man. They can really shoot! They have more freedom to get to the basket. The ball moves a little better. These kids are shooting from farther, with more accuracy. Now some teams shoot up around thirty threes a game. My era, you always think that’s the greatest era. But I’m not so sure anymore.”

Hot damn, was it ever refreshing to hear a great, retired basketball player say something nice about the current era. This quote appears in an article considering a deeper, four-point shot. Which is a friggin ridiculous idea. But it does make me feel old – because I do now understand old-time basketball fans feel when they complain about the three-point shot, something that pre-dates my basketball consciousness, and is therefore entirely natural to me. But four-points? FOUR? That’s just stupid. Now get off my lawn! -TOB

Know When to Hold’em: Sharks in The Stanley Cup Finals 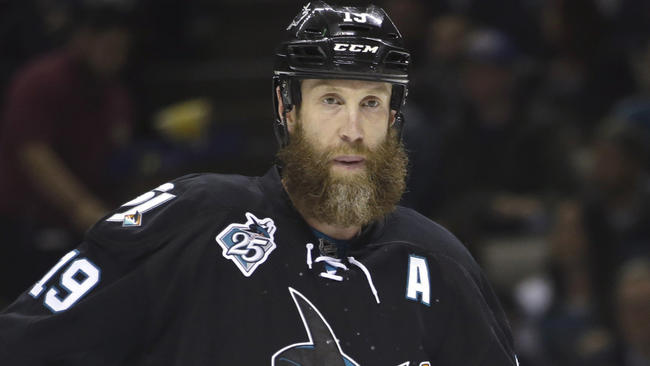 It’s served as a marker of my earlier days in California: Come May, all was right with the world. The days officially longer, baseball in full swing, and the inevitable playoff run of a San Jose Sharks team getting bounced out of the playoffs after a strong regular season. While nowhere near the run of other “cursed” teams like the Cubs or Browns, for over a decade the Sharks found ways to under-deliver to the point where I would take the easy way out and make comments like, “Thornton’s just not a winner,” “They’re not playoff tough,” and so on. Well, the Sharks are in the Stanley Cup Finals, and what’s most surprising is they resisted the urge to blow up the team. Cornerstones Joe Thornton and Patty Marleau, both with 18 years in the NHL, have faced their share of criticisms, and both have been stripped of the captain’s badge, but they’ve always been excellent performers. While their respective roles on the team have shifted, they’ve remained at the heart of a strategy to bring the cup to San Jose. Deadspin’s Barry Petchesky puts it this way:

“But what makes the Sharks such a fascinating roster is that they’ve had so much regular-season success, even preliminary playoff success, with the same players for years now. Marleau, Thornton, Pavelski, Couture, Vlasic, Burns: they’ve been through this and kept running up against that hump. The stars finally aligned to get over it—or at least partially.”

That takes a lot of nerve, especially in the sports age in which we find ourselves. We never criticize the team for re-tooling, even after the re-tooling needs a re-tooling. Sometime the best plan of action really might be to stick with it and dance with the girl that brung ya…even if she has a narsty (emphasis on the r) beard. – PAL

TOB: The most important point Phil touched on, I think, is how amazing it is that this core of players is still together. The NHL is not as financially prosperous as the other three major sports, because the TV money is not at the same level. So the NHL has imposed a strict and severely limiting salary cap. It is very difficult to keep a good team together in the NHL. And the Sharks have been a good team, despite the playoff disappointments. There were rumors that management was ready to break up this core many times. And they’re all still here, and it finally came together, seemingly out of nowhere. I haven’t been a real hockey fan since the 90’s – there’s just not enough time and hockey didn’t make the cut for me. But I did watch Wednesday’s game, with my brother-in-law, who is a huge Sharks fan. It was a lot of fun. Go Sharks!

Obligatory Oakland Story: One Reason Why I Like Harrison Barnes

I’ve had a soft spot for Harrison Barnes ever since hearing him on the now-defunct “The Champs” podcast (thanks for the rec, Rowe). Barnes comes off like a “regular dude” who happens to flash NBA All-Star moments. I like that he’s from Ames, Iowa, that he is a comedy nerd, and – generally speaking – seem like normal, inquisitive dude. So it shouldn’t come as a surprise that he was the Warriors player that flipped the tables on local journalist Marcus Thompson II and asked to learn more about Thompson’s upbringing in East Oakland.

As Harrison explains to Thompson. He wanted to learn the real backstory from the journalist and the place both of them now call home:

“And I don’t want the bio, something where you just put in all that weak stuff,” Barnes said. He continued explaining his inquisition of my origins. “Why does it have to be the media guy gets in trouble, or something tragic happens in their family, for you to get to know some of these media guys’ personal story? Like Craig Sager, everyone knows his story. But before he got sick, how many people knew him? I just feel like it doesn’t always have to be to that extent before you get to know somebody.”

While the Warriors face an uphill battle to try to get a W in Oklahoma and push the series to a Game 7 in Oakland (you heard it here – Warriors win this series. OKC plays tight on Saturday, and the Dubs win an instant classic at Oracle in Game 7), and while Barnes’ future with the Warriors is very much up in the air (restricted free agent at the end of the year and will get overpaid), it’s cool to see a player reach out, learn about a journalist and the community he’s called home for the past four years. – PAL

TOB: As Phil said, I like HB – he seems like a regular guy who happens to be tall and good at basketball, and he doesn’t allow that to change who he is. But he’s been a ghost for most of these playoffs. The Warriors need him to step up huge to have a chance in this series. Fly, Black Falcon! Fly! Ca-caw!

Video of the Week: Wait for it…

Check out all of our songs on our playlist. It’s stronger than Uncle Rico’s arm.

“Ladies and gentlemen of the jury, I’m just a caveman. I fell on some ice and later got thawed out by some of your scientists. Your world frightens and confuses me! Sometimes the honking horns of your traffic make me want to get out of my BMW.. and run off into the hills, or wherever.. Sometimes when I get a message on my fax machine, I wonder: ‘Did little demons get inside and type it?’ I don’t know! My primitive mind can’t grasp these concepts. But there is one thing I do know – when a man like my client slips and falls on a sidewalk in front of a public library, then he is entitled to no less than two million in compensatory damages, and two million in punitive damages. Thank you.”