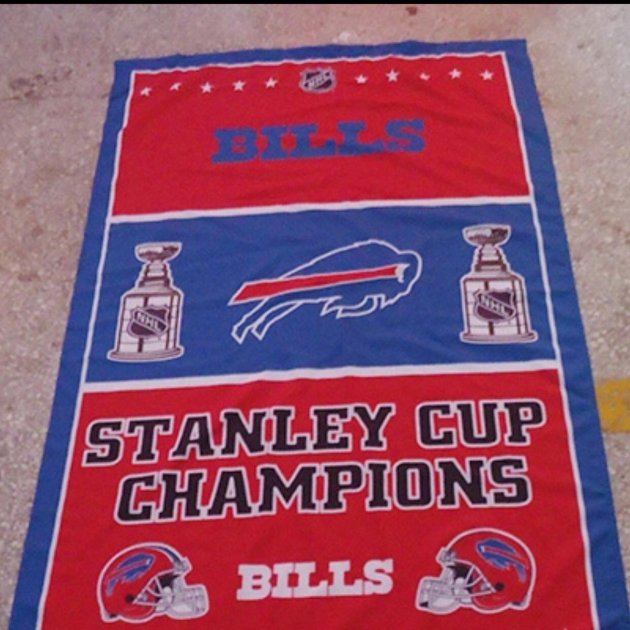 Losing 4 Super Bowls is fine when you have a Stanley Cup for your tears to fall into. China is an amazing place.

And if you’re not watching it – get on it! To state the obvious takeaway from the series – the Simpson trial represented a boiling over of cultural conflicts that even surpassed the scope of a double homicide trial. The broader story is way more than I can summarize here. I just urge you to watch the series.

Let’s focus on one tiny, fascinating breadcrumb leftover from the broader story here. How do we remember Simpson’s athletic accomplishments? We don’t. Jason Reid contends its white people’s anger over the acquittal that is at the root of the “ghosting” of Simpson’s athletic feats, and he sums it up like this:

“Many white people still refused to abide by a verdict they believed to be illegitimate — to see him not only freely interacting in society, but being celebrated, made the injustice that much harder to swallow…

“[P]art of the ghosting of O.J. means never, ever acknowledging his greatness on the football field.”

“Think about it: When was the last time you heard an analyst, anybody, compare and contrast a thrilling young running back to Simpson?

“Emmitt Smith, Barry Sanders, Tony Dorsett and others are legends cited constantly to praise top backs. During the countless hours of football coverage on television all year-round, it’s not uncommon for former players to revel in sharing anecdotes about Jim Brown’s power, Walter Payton’s determination or Gayle Sayers’ elusiveness. It’s as if no one ever saw Simpson run.”

The documentary talks a lot about Simpon believing he transcended race. I think people’s disgust with Simpson, and the act many believe he committed, transcends race. Reid makes the argument that white anger is the root cause of our erasure of Simpson’s football greatness. I have a really hard time thinking people want to forget about him as an athlete because of his race. I think people don’t bring up his time with the Bills and USC because he murdered two people and was acquitted, then wrote a book titled If I Did It. OK, he was one of the greatest at running with a football. There. We don’t bring it up, because he’s made us not care about him as a great football player, which is next to impossible to do. – PAL

TOB: Two white guys discussing this article is dicey. BUT. In watching the documentary, there seems to be something that Jason Reid misses: white people didn’t want OJ convicted because he’s black and he married a white woman. They wanted him convicted because most people think he did that shit. Hell, the documentary spends considerable time talking about how OJ had infiltrated the white business world. Those rich, old, white dudes OJ palled around with did not care that OJ was married to a white woman. Not one bit. On the other hand, the documentary also does a fantastic job explaining the anger that black people in Los Angeles were feeling after decades of horrible treatment at the hands of the LAPD. So when I read this article it strikes me that the writer thinks that anger is a two-way street. But it’s not. Sure, there are lots of racist people out there. But the media doesn’t compare players to OJ because that’s a lightning rod that no one wants to touch. Who the hell wants to be compared to OJ? Not me. And why compare someone to OJ when Jim Brown was first and better? There’s no need to invoke OJ. White people are not out here trying to erase OJ Simpson’s football career because he’s black. They’re erasing his career because they think he butchered two people. Simple as that.

Yep, I’m writing about Ultimate Frisbee. Never played it, but I’m in a weird mood after Curry fouled out on 3 bad calls in the NBA Finals. Thinking big picture here. Hang with me.

Ultimate Frisbee is a sport that costs nothing to play and rewards pure athleticism (speed, leaping ability, agility). It’s a team sport that – like soccer – is in constant motion, and its highlights are about as good as anything you’ll see in football or basketball.

Let’s say CTE is an even bigger problem than we realize, and the mighty sport of football – crippled by damning medical research, lawsuits, and plunging participation at the youth level – all but disappears within a few generations. In all seriousness, I could see Ultimate Frisbee being a legitimate contender for a spot as a major sport in the US.

Which brings us back to the present. Ultimate is on the fringe, but gaining some momentum. As it straddles the line between a “pickup” game and a professional sport – with a multi-year ESPN deal –  it faces several decisions, not the least of which is whether or not the game needs referees.

For many years, the players decided if they had been fouled. But as the sport became more competitive, players were accused of taking advantage of the system. Extended disputes threatened to spoil the game for spectators and television audiences, so a debate about adding officials began.

Many big tournaments, including the world championships, have found a middle ground: They use an official known as an observer or adviser, who acts more like a mediator than a judge or executioner.

The observers are not empowered to make calls on their own, as a referee would. Rather, they can mediate if two teams cannot come to an agreement.

A mediator. No ref, but a friggin’ mediator. So simple, and fundamentally perfect! Let the players decide the outcome of the game. I love this notion. It’s like a golf ethos applied to a team sport. And yet, if the game keeps growing, i.e., becomes a bigger revenue generator, this will never, ever, ever fly for 3 reasons I can think of off of the top of my head: player salaries (not very much at this point, but who knows in the future), TV money, and gambling. It’s almost as if one could argue the factors that make a sport without an official untenable are the factors that simultaneously corrupt and evangelize the major sports we love today.

It’s just fun to get a snapshot and think about the future of a sport in its professional infancy. – PAL

TOB: I was all set to make fun of this (For example, I’m sorry, Phil but that highlight reel is not as good as anything I’ll see in football or basketball. I had a lot of “I mean, that was cool, sure…” reactions. For one, it’s a lot easier to catch and throw a frisbee than a football). But then I read the mediator thing. My god, it’s brilliant. Imagine if basketball had mediators, whose job was only to step in and make calls when players disagreed on a call. You know those games when the referees blow their whistles waaaay too much, and both sides are annoyed, and the fans are annoyed, and everyone says, “No one pays to see the refs!” That frustration would be gone. If a couple guys were going at it, they could do that without interrupting play every possession. What a great idea. I’ll still never sit down and watch a game of Ultimate Frisbee, gtfooh. But I like the thought of what they’re doing.

PAL: I’ve seen you throw a frisbee, and you’ve seen me throw a frisbee…are you sure you want to make the argument that it’s easier to do than throw a baseball?

TOB: With a little practice, anyone can throw a frisbee really far. I will never throw a ball like this:

PAL: I’ll grant you the arm strength argument of throwing a football. But throwing a ball far is one tiny portion of what makes an professional quarterback good. There’s reading the defense, making quick decisions, elusiveness, touch, etc. – all of which are far more important than having a strong arm. Those other qualities also completely translate to Ultimate.

Let’s Check in With Curling. YES I SAID CURLING.

No, it’s not a Winter Olympic year. No, it’s not even winter. But curling, that very Canadian (read: weird) “sport” that is part shuffleboard and part cleaning your apartment after a wild party, is going through some major unrest.

The short of it: someone invented a new broom (the icePad, very original and clever) that makes it much easier for the “sweepers” to direct the stone to the target. Consequently, the icePad has been banned for this season while the sport tries to figure out what the heck to do when a technology so fundamentally changes your sport. If you want to understand the physics of the icePad, read the story. It is interesting. But I really love the complaints from players (curlers?) who hate the icePad. For example, Olympic Gold Medalist Ben Hebert: “When you throw a great rock, we want you to make the shot, and when you don’t throw a great rock, I don’t think you deserve to make the shot.” Another former Gold Medalist, Brad Gushue, complained that it takes the skill away from the players and puts it in the hands of the sweepers. Isn’t sweeping part of it, fellas? Sounds to me like Hebert and Gushe don’t like their own damn sport and they’d be better off meeting me and Phil at Wreck Room where we can dominate them at tabletop shuffleboard. And I hope their people is around to see it, because they will get embarrassed! -TOB

Source: “Here’s the Physics Behind the Broomgate Controversy Rocking the Sport of Curling”, Jennifer Ouellette, Gizmodo (06/12/2016)

PAL: Goddamn, this is a 1-2-3 story if I ever saw one. Good little physics lesson in it, funny names for meetings like “Sweeping Summit”, and old-timers trying to preserve the “spirit of the game” (this comes up in our story about Ultimate Frisbee, too…what an odd week). One question remains: Who’s the Chazz Michael Michaels of Curling?

Video of the Week: see above, fools!

PAL’s Song of the Week: Mason Jennings – “The Field”

“One time, Bill Murray came up to me at Wendy’s, took a fry off of my tray, ate it, looked me in the eye and said, ‘Nobody’s going to believe you.’”