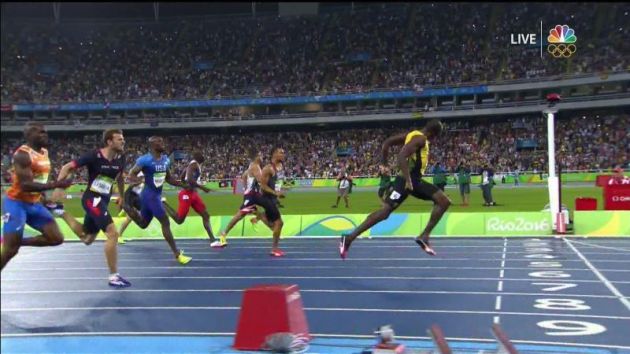 My Favorite Story from The Olympics

Wayde van Niekerk broke one of the oldest records in Track & Field on Sunday night (TOB writes of one of the other longstanding records this week, too). Michael Johnson’s 400m time of 43.18 stood for 17 years until van Niekerk took it down – from lane 8, no less – with a 43.03. And if that’s not remarkable enough, van Niekerk’s coach is a 74 year-old great grandma. You can’t make this stuff up.

Anna Sophia Botha couldn’t convince security on at the track in Rio to let her in (she eventually was allowed in after South African officials vouched for her), but she’s had a long history of convincing her athletes. She’s been the head Track & Field Coach at the University of Free State in South Africa since 1990. Her coaching technique: “benevolent disciplinarian”. You know, a lot of love, but 5 minutes early is considered late in her book. And time – every day – is needed with her athletes. Not only to train, but to read their body language. van Niekerk isn’t her only world class runner. Akani Simbine finished 5th in the 100m. And don’t mistake this Olympics as her swan song. “I still love coaching and I still love my athletes, so I can’t see a reason why I would go and sit down and play with my fingers. That’s not in my nature.”

Where Have You Gone, Frederick Carl Lewis?

When I was a kid, I loved track and field, and my two favorite events were the 100 meter dash and the long jump. It was a great time to be a fan of the long jump. I was 9 during the 1991 World Championships in Tokyo, when Mike Powell broke Bob Beamon’s 23-year old World Record and jumped an unthinkable 29 feet, 4 ¼ inches – 2 inches beyond Beamon’s hallowed mark. In that meet, he was dueling with Carl Lewis who (in hindsight, inexplicably) was one of my five favorite athletes. Powell just beat Lewis. I remember seeing extended highlights of the World Championships on ESPN, and I was riveted.

Together they had two of the three longest jumps in history. To this day, only four jumps in history have been over 29 feet. Lewis had two other 29 foot jumps that day that were disallowed as wind-aided. It was the first time either man jumped over 29 feet in their career. And Lewis did it three times. On the same day. It was also the first time Lewis had lost a long jump final in over a decade, having won 65 in a row. Really, check out the Wikipedia sub-article on the competition, even reading it is fascinating.

Heading into the 1992 Olympics in Barcelona, the scuttle was, “Who is going to jump 30 feet first?” I was sure Lewis was going to do it in Barcelona. I think I recorded the event on VHS, because I wanted to keep that history forever. And then…neither guy even came close. Lewis jumped 28 feet, 5 ¼ inches on his first jump in the finals, and that held up for gold. Powell got the silver at 28 feet, 4 inches. Neither ever again came close to 30 feet in their career. And no one else has, either, 25 years later. The winning jump at the Olympics this year was just a hair under 27 feet, 6 inches, and NBC barely bothered to air it. So…what the hell happened to the long jump?

In every other sport, records fall every single year – like Katie Ledecky shaving 2 friggin seconds off her 800-meter swim world record. But Beamon’s record stood for 23 years, and his jump even occurred at altitude. Powell’s record did not occur at altitude and has stood for 25 years. It may stand forever. Why? Powell and Lewis’ day in 1991 may have reached the bounds of human ability (it still boggles my mind that they both did this on the same day). Alternatively, it may be something more practical: jumping 29 feet is impossibly difficult, requiring years of specialized training. And what’s the payoff? No one wants to work hard enough to jump 29 or 30 feet, when 27 ½ feet will get you the Gold Medal.

Whatever the reason for its decline, I hope the long jump makes a comeback. It’s damn awesome to watch. -TOB

It seems counterintuitive at first blush to consider a record set in 1991 to be untouchable, but the notion of diminishing incentive is really interesting. I feel like this is a perfect subject matter for Malcolm Gladwell’s new podcast, “Revisionist History” (I highly recommend it).

TOB: I really doubt it. At my peak physical condition, MAYBE. But not now (I also recommend Revisionist History).

I’m a sucker for stories about iconic sports images. Ali towering over Liston. Mantle tossing his helmet. Tommy Smith and John Carlos saluting Black Power. Dwight Clark in the end zone. The fact that you can see most – if not all – of these photos as you read this proves the ‘iconic’ descriptor is earned. They capture the emotion of the moment – that’s why they live on. The emotion separates these frames from the hundreds of other photographs taken at the same events. Oftentimes the story behind the photo is as interesting as the photo itself. Why did the photographer set up where he did? Why did she snap the photo when she did? Why did they wait longer, or linger as everyone emptied the stadium? The photographer made dozens of choices – connected and seemingly disconnected to the event they are covering –  leading them to the moment when their viewfinder and the human condition intersect. Well, here is a story about one of those moments that took place at the 1984 Olympics, and here’s the photo:

While you may not be familiar with the image, take one look at it and you’ll see that photograph capture what it feels like to watch a dream literally pass you by. I highly encourage you to click through to the full story, because there is so much that goes into this one frame. To say anymore would spoil a fantastic read. – PAL

TOB: I’ve known the story for years of Decker and Zola Budd for years, but not the backstory. I recall a long piece on NBC about it before the 1992 Olympics, as Decker was making one last attempt at Olympic Gold. The backstory is fascinating, and I highly recommend reading it.

Kris Humphries Was Once a Better Swimmer Than Michael Phelps (Wait, What?)

Kris Humphries is a pretty good NBA player. I mean, he’s ok. He’s had his moments. He might be better known for a short-lived marriage to Kim Kardashian. But this is pretty incredible: when he was a little kid, he was a fantastic swimmer. In fact, he was better than Michael Phelps:

Look at that! As far as I can tell, that’s saying that Humphries set two national records for his age group, and beat both Michael Phelps and Ryan Lochte. Incredible. A lot goes into turning 10-year old success into Olympic stardom, including an unfathomable amount of hard work, but it sure seems like Humphries had the tools to be a great swimmer. Of course, Humphries has made nearly $60 million in his NBA career. I doubt Phelps has made that much in swimming and sponsorships. Even if he did, I guarantee Phelps worked a lot longer and harder to get where he is than Humphries did. And I’m guessing Humphries is happy with his choice. -TOB

PAL: What do you call another Minnesota kid done good story? I call it Friday.

Unfortunately, there’s no embed available for this week’s video, but it’s more than worth checking out here.

This is a special one remembering a childhood neighbor, Kyle Satrom, the Minnesota Twins magical 1991 World Series Championship, and a true love of baseball. -PAL

PAL Song of the Week: Sharon Van Etten – “One Day”

Listen Van Etten and all of the weekly picks here, friendo

“If you get the nachos stuck together, that’s one nacho.”