Football is back. Everyone’s a bit rusty.

If you’ve been living under a rock this week, you might have missed that someone noticed Colin Kaepernick hasn’t been standing for the national anthem before the 49ers’ preseason games this year. When asked about it, Kaepernick said:

“I am not going to stand up to show pride in a flag for a country that oppresses black people and people of color,” Kaepernick told NFL Media in an exclusive interview after the game. “To me, this is bigger than football and it would be selfish on my part to look the other way. There are bodies in the street and people getting paid leave and getting away with murder.”

Needless to say, the #HotTakes were out in full force. From the people calling for him to leave ‘Murrca if he don’t like it, to former player/current analyst Rodney Harrison stating, unbelievably, that Kaepernick can’t make such a protest because he doesn’t know what it’s like to be black or a person of color in America. Kaepernick, by the way, is half black. When informed, Harrison said, even more unbelievably, that he “never even knew (Kaepernick) was mixed.” My head nearly exploded with all the layers of stupidity in the things Harrison said.

This protest may end up tanking Kaepernick’s already flailing career. And the true honor I find in his stance is that he knows this fact and doesn’t care. He doesn’t care if it affects his standing with the team, his career, or his bank account. It’s a principled stand, and I saw a lot of 49ers fans online not understanding that and only caring how this affects their football team, which was really sad.

Thankfully, some intelligent people also wrote about this issue. First and foremost, The Undefeated’s Domonique Foxworth who takes down the arguments of those who are angry at Kaepernick, and notes that Kaepernick’s protest is American as can be.

As Deadspin’s Barry Petchesky also points out, another popular take was that Kaepernick is disrespecting our veterans who fought to protect our freedoms. It was very heartening, then, to see so many veterans showing support for Kaepernick, with many of them pointing out that they risked their lives to protect our rights, and those rights include our First Amendment rights.

I'm riding with 7…I fought for freedom not a song #VeteransForKaepernick pic.twitter.com/LZYUoHCbOT

Other veterans asked that people not try to speak for them.

if you haven't served, don't speak on my behalf #VeteransForKaepernick pic.twitter.com/30AtfIvaRI

And still other veterans simply agreed with Kaepernick’s stand:

#VeteransForKaepernick because I didn't volunteer to defend a country where police brutality is swept under the rug. pic.twitter.com/LtBkTvHHAn

As for me, I’m not sure Colin Kaepernick really moves the needle enough to effectuate any real societal change (though at least two NFL players joined in his protest Thursday night). The good news is that, after speaking to a former green beret and NFL hopeful this week, Colin agreed to kneel during the anthem instead of sitting – to still show respect for his country, but to still call attention to his cause. He also stood and clapped for “God Bless America”, and most importantly…he announced after the game that he’s donating his first $1 million in paychecks this season to a number of community organizations. As his teammate Eric Reid said, “He’s taking advantage of the platform that he’s given to bring awareness to a worthy cause. What’s more American than that?” Amen. We are finally seeing professional athletes use their public pedestals for good instead of worrying about their sponsors or their paychecks. For that I applaud Colin. -TOB

PAL: Liberty – the defense of and struggle for – that’s the part of America that is truly great. That’s what’s worth honoring. Liberty has always been the heartbeat.

When a person – any person – doesn’t believe his/her flag stands for liberty, then they don’t have to stand for the flag. America is an idea. The flag represents that idea, and can never, ever represent anything less. That a minority of folks – and have no doubt they are a minority – still don’t understand what the Star Spangled Banner represents is the real cause for concern here.

While we’re at it – there are a million other far more patriotically egregious if you’re looking to vent about people disrespecting the ol’ red, white, and blue. For starters, here’s a list of sports teams you paid to “Salute the Troops”, courtesy of the Department of Defense:

What, you thought the teams did all that out of patriotism?

I had a rough week, as my son had a health scare last weekend. He looks to be fine…but as a dad I can really relate to this story. Leah Paske is the mother of a child with autism. Her son, Bo, is in middle school. Middle school sucks for almost everyone, but it is especially difficult for anyone who other kids see as “different”. This week, the Florida State football team visited Bo’s school, and someone sent Leah this picture of Seminole wide receiver Travis Rudolph eating lunch with Bo at an otherwise empty table: 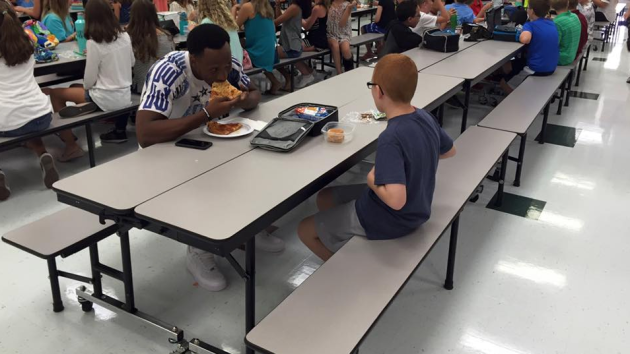 As you can imagine, the picture made Leah very happy:

“I do remember middle school being scary, and hard. Now that I have a child starting middle school, I have feelings of anxiety for him, and they can be overwhelming if I let them. Sometimes I’m grateful for his autism. That may sound like a terrible thing to say, but in some ways I think, I hope, it shields him. He doesn’t seem to notice when people stare at him when he flaps his hands. He doesn’t seem to notice that he doesn’t get invited to birthday parties anymore. And he doesn’t seem to mind if he eats lunch alone. It’s one of my daily questions for him. Was there a time today you felt sad? Who did you eat lunch with today? Sometimes the answer is a classmate, but most days it’s nobody.

A friend of mine sent this beautiful picture to me today and when I saw it with the caption “Travis Rudolph is eating lunch with your son” I replied “who is that?” He said “FSU football player”, then I had tears streaming down my face. Travis Rudolph, a wide receiver at Florida State, and several other FSU players visited my sons school today. I’m not sure what exactly made this incredibly kind man share a lunch table with my son, but I’m happy to say that it will not soon be forgotten. This is one day I didn’t have to worry if my sweet boy ate lunch alone, because he sat across from someone who is a hero in many eyes. Travis Rudolph thank you so much, you made this momma exceedingly happy, and have made us fans for life!”

Source: “Here Is a Nice Story, I Hope You Will Enjoy It Because Most Everything Else Is Awful”, Barry Petchesky, Deadspin (08/30/2016)

You’ve likely been brought up to speed that veteran NBA sideline reporter Craig Sager (yes, the one who wears the wacky suits) has been in a hellacious cancer battle since 2014. This week he underwent a rare third bone marrow transplant. Add to that countless rounds of chemo, and, well, it the odds are not in his favor. In his words, “I like to bet on horses, I like to bet on dogs. I’ve bet on a lot of things with a lot higher odds than this.”

But, damn, this guy continues to battle, round after round. He’s trying everything, and he’s sums up why in a way that’s downright inspiring. “Man, life is too beautiful, too wonderful, there’s just too many things.”

There’s another reason why I shared this story. Barry Petchesky has become one of my favorite sports writers since we started this blog. Two of our three stories this week – one TOB highlighted above and this one – are his work. He writes with a direct honesty. Never sentimental, but not afraid to write about emotion. Here’s a perfect example from the Sager piece:

“This is all very sad, because: Craig Sager is probably going to die. You’re not supposed to say or write things like that, because no one likes to be made to think about it. I hate that line of thought, because it’d be better for everyone if we could discuss cancer and illness and dying from a mature and candid perspective. It’s not something to dance around. It’s serious shit, and we should say what we mean.

“The way to talk about this stuff without being disingenuous is to remember why it makes you sad: to recall how much you’ve enjoyed Sager’s work over the years, to see the impact he’s had on those who know him by seeing the love he’s getting from family, friends, colleagues, and the general public, and to see if you can’t take some inspiration from Sager’s own stated motivation for seeing his treatment through…”

Make a habit out of reading Barry Petchesky’s work, and think good thoughts for Sager and his family. – PAL

TOB: I echo Phil’s thoughts about both Sager and Petchesky. And by the way, all three of our stories this week featured Petchesky articles. Big week for you, Barry.

PAL Song of the Week – Ramsey Lewis Trio – The “In” Crowd

Check out this week’s pick, and all of the previous picks below. Guaranteed to get you lucky.

If I owned the Twins, I wouldn’t even show up here. I’d just hire a bunch of scientists to do my homework. I mean, if you’re rich you don’t have to be smart. That’s the whole beauty of this country.