Rules for Bills tailgates…or words to live by?

In theory, I get why we arrest fans who run onto athletic fields during an event. I also get why they don’t show it on TV, to discourage people from doing it to get on TV. It interrupts the game, it could pose a danger to the athletes (and the fans). I get it. But…the anarchist in me thinks it’s hilarious. I love everything about it. The crowd cheers as they see what’s going on, the TV cameras pan/cut away. The fan tries to make it as long as possible before getting crushed by out of shape security guards who have been huffing and puffing for 60 yards undoubtedly thinking, “I don’t get paid for this shit!” The fan then gets dragged away, in handcuffs, as the crowd cheers their conquering hero.

Most announcers do not have a sense of humor about this and get all huffy about the idiot on the field interrupting the game. Lucky for us, Kevin Harlan is NOT most announcers (I’ll never forget tuning into a March Madness online streamed game about ten years ago and hearing a hot mic catch Harlan ripping Bobby Knight for being overrated). Thus, during Monday Night Football this week, idiot on the field met Kevin Harlan and magic was made. 16-year old Santa Clara 49er fan William ran onto the field, and Harlan, announcing the game on the radio, called it like a huge play in the game.

I have watched this a dozen times. It never stops being funny. “Some goofball in a hat and a red shirt. NOW HE TAKES OFF THE SHIRT…” Please watch, and enjoy. And then read the hilarious interview Deadspin conducted with the kid (he had written his phone number across his chest). Because he was 16, he got off with little more than a slap on the wrist. Damnit. I missed my window. -TOB

TOB: As a Californian who used “hella” liberally, I’m not sure when I stopped. Maybe when I got married? Maybe when I became a lawyer? I’m really not sure. I accidentally said it about a week ago and I felt completely ridiculous – like the old alumnus at the college frat party trying to hit on the sorority girls. It was not ok. I am getting so old.

David Ortiz played parts of his first 6 seasons with the Twins. He got hurt and failed to live up to expectations. This year, we were told, this is the year Ortiz figures it out. The Twins ended up RELEASING him. He goes to Boston and becomes an icon, likely on the Mt. Rushmore of Boston sports figures. With this likely his last year, is David Ortiz having the best farewell season of all time? If nothing else, Jayson Stark’s rankings makes for great bar discussion. Here’s his list:

Of those names, only Ortiz and Williams retirements were a result of it simply being time. Koufax arm was a throbbing mess by age 30. No MLB team wanted to touch Bonds after a very solid year at age 42 due to the ongoing PED story. And Shoeless Joe…well, we know why he couldn’t play anymore.

Maybe Ortiz is getting some help, if you know what I mean, but I was chatting with my brother-in-law the other night (Red Sox lifer), and we agreed on a new rule: no drug tests for anyone competing at the age of 40. Free pass. Ortiz’s season is pretty absurd, not to mention crucial for a team in the thick of a three-team division race. I mean, this dude will get MVP votes at age 40! Here are some of his more absurd numbers this year:

Do check out the article. Stark’s breakdown of Bonds, Williams, Koufax, and Shoeless Joe are great. What a great decision to by the Twins to let him go. – PAL

Source: “Is David Ortiz having the greatest farewell season of all time?”, Jayson Stark, ESPN (9/14/16)

TOB: I dunno, Readers. I think Phil can step up the bitter. Bring it, Phil. Give me a REALLY good Twins rant. After the second half the Giants have had, I need the catharsis.

PAL: All I’m saying is this: When he’s a Twin he hurts his wrist, he hurts his knee, he hurts his wrist again…then he finally hits well (20 HR, 75 RBI in 125 games in 2002), and they can’t even trade him. Then he goes to Boston, becomes healthy and immediately hits 30 bombs. Gee, I wonder what happened in Boston with Manny Ramirez? The only thing that allows me to sleep at night is knowing the Twins unloaded A.J. Pierzynski to the Giants for Joe Nathan and Francisco Liriano. 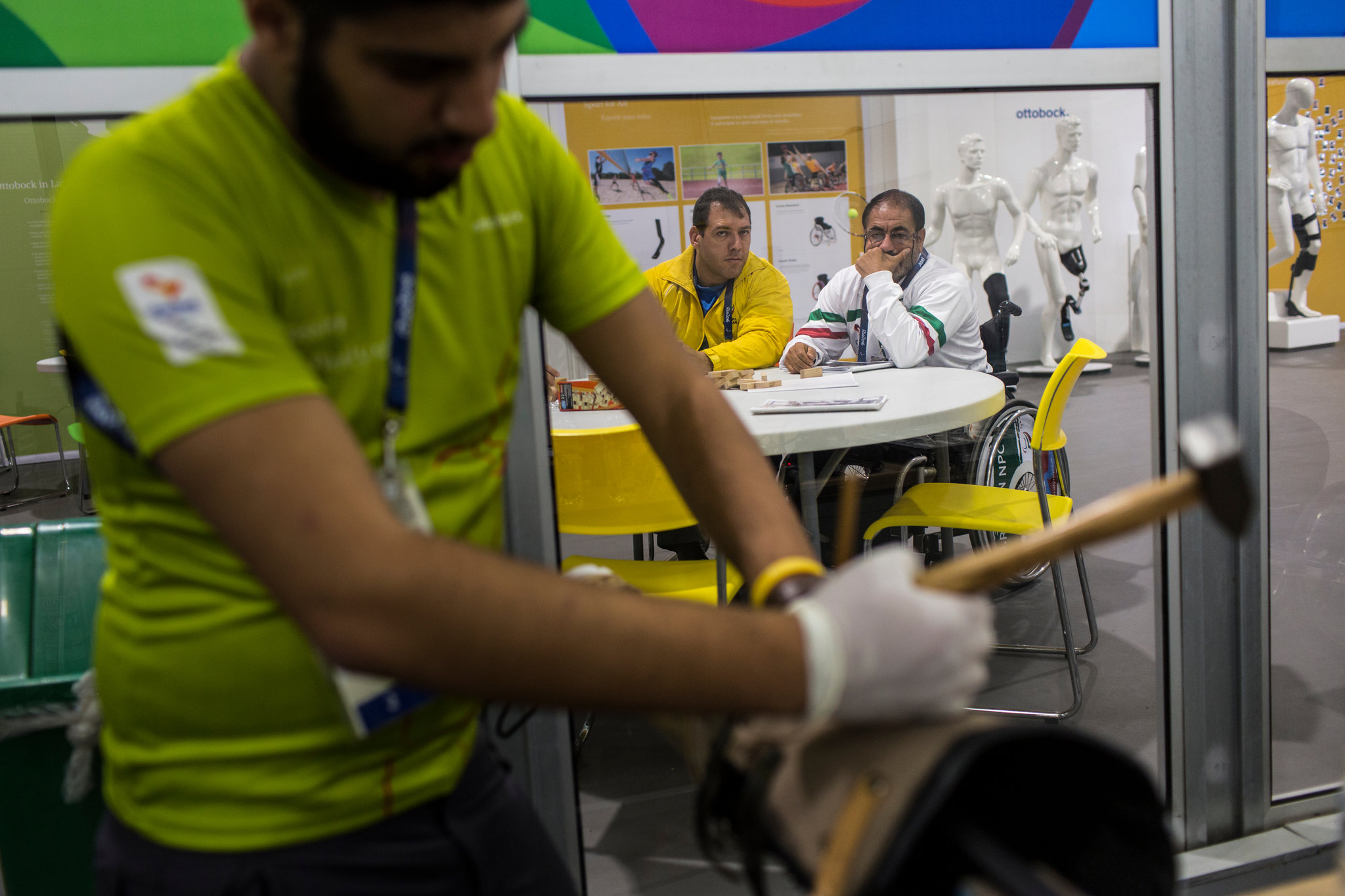 I haven’t given much attention to the Paralympics. Most of us know they follow the Olympics in the same host city, but by the time we get into September many are prepping for a baseball playoff run or turning our attention to football. But the following story is a really interesting vantage point on a wonderful event with a history spanning 68 years: the repair shop.

“When athletes arrive at the Paralympic Village here, they care most about three things: internet access, food and the location of the repair shop…”

The sheer scale and breadth of capabilities, technology, and old fashioned problem-solving that goes into getting the athletes their equipment dialed-in before they compete is inspiring. The spectrum of technology seems to expand decades: While athletes from, say, the United States and Germany are using cutting edge solutions, athletes from third world countries are competing with prosthetics that are flat out obsolete.

“The unpredictability of the job demands an array of skills from the technicians, beyond an expertise in prosthetics, welding or wheelchairs. Specialists who hail from 29 countries and speak 26 languages, they must be calm enough to handle the pressure of a workplace that handles at least 100 repairs every day. They must also be creative and intuitive enough to solve problems they have never seen before.”

What an awesome achievement of service, ingenuity, and support. – PAL

A Turning Point in Athletes Standing Up For Social Justice?

A few weeks back, Carmelo Anthony called on athletes to demand change and speak out in support of social justice. After the last few generations of athletes have cared more about protecting sponsorship money than using their social podium for good, I was skeptical any change would actually occur. Happily, I appear to have been wrong. In recent weeks, Colin Kaepernick has dominated the headlines by sitting and then kneeling during the national anthem in protest of the treatment of people of color in this country. Many NFL players, and athletes in other sports, have joined him. In addition, University of Wisconsin basketball player Bronson Koenig, the first ever Native American to play in the NCAA title game, announced plans to drive 11 hours to Bismarck, North Dakota and join the Dakota Access Pipeline Protest (Koenig will also host a free youth basketball camp while there). Thousands have protested the construction of the pipeline, which will cut through numerous Standing Rock Sioux sacred sites and burial grounds. The protests have been successful, at least temporarily – as construction has been put on hold to reconsider the plans.

It’s a great time to be alive, if you ask me. Things are not perfect, by any means. But the tide seems to be turning – people are beginning to care and to demand change and to do something about it. And that is the first step. Kudos to Carmelo, Kaepernick, Bronson Koenig and so many others for using their platform for good. And to small-minded people like Trent Dilfer, who only care about about the effect a protest like Kaepernick’s has on his football team…get some god damn perspective.

PAL: Well put, TOB. A bit more context on the importance of Koenig joining the protest. He is the most prominent Native American basketball player in the country and averaged 13 ppg for a Sweet 16 Wisconsin team (he also played in 40 games for the 2014-15 team that lost in the National Championship). He is a sports hero to the Native American community on the level of a LeBron James. I bring this up not to say his athletic accomplishments make his joining the protest more important than anyone else, but to underscore the fact that he is a leader within the community.

Whatever side you find yourself on with regards to the construction of the pipeline, I hope we can all appreciate young men and women putting action behind their beliefs. TOB’s right; it’s really cool to see more athletes taking a stand lately.

Marshawn is a national treasure. Bear Grylis is barely tolerable.

PAL Song of the Week: Johnny Cash – “Sea of Heartbreak”