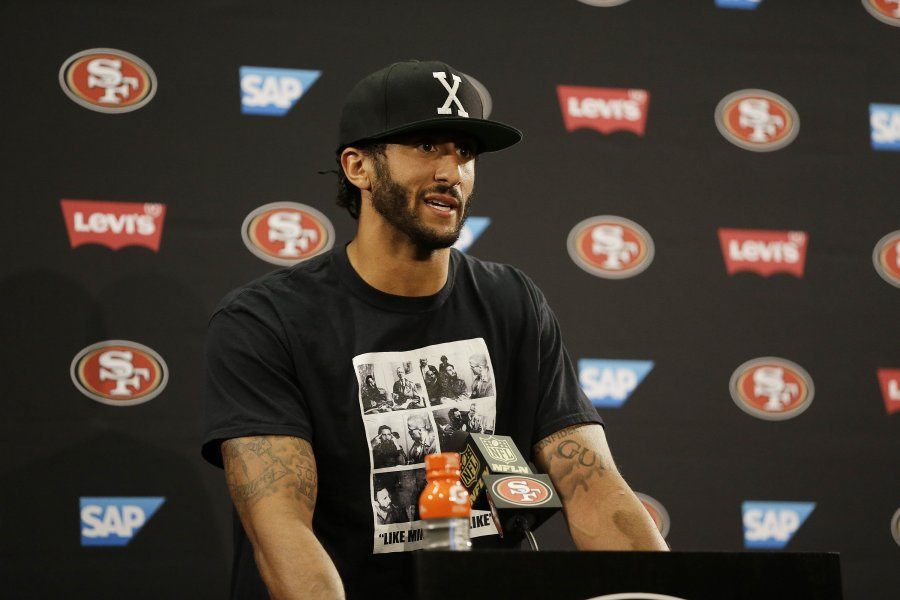 Colin Kaepernick has been protesting oppression of minorities by choosing to first sit, then later kneel during the National Anthem before NFL games. In case you’ve been on a spaceship for the past few months, this has been a big deal. Kaepernick, who in my opinion has been thoughtful throughout, offered this explanation:

“I am not going to stand up to show pride in a flag for a country that oppresses black people and people of color. To me, this is bigger than football and it would be selfish on my part to look the other way. There are bodies in the street and people getting paid leave and getting away with murder.”

Whether or not you agree with Kaepernick’s point of view, his ongoing protest is in response in part to a string of highly publicized tragedies involving police killings of black people. There have also been highly publicized tragedies involving police officers being targeted and killed. All this came to a head while our first black president was in office, and it continues as we await the inauguration of Donald Trump, whose past and campaign are littered with examples of racism, xenophobia, and misogyny.

Either racial and discriminatory tension has resurfaced with a violent fervor, or the recent tragedies won’t let us ignore it any longer. All of this is to say that I understand why Colin Kaepernick is protesting, and I support him in doing so.

Then I read he didn’t vote. His reason:

“You know, I think it would be hypocritical of me to vote. I said from the beginning I was against oppression, I was against the system of oppression. I’m not going to show support for that system. And to me, the oppressor isn’t going to allow you to vote your way out of your oppression.”

Again, I would classify this as a thoughtful response, i.e., he had a reason and constructed a logic around that reason, but I strongly agree with Kevin Blackistone’s  critique of Kaepernick:

“To be sure, the very issue that drove Kaepernick to silently protest the national anthem was likely affected, and drastically, by Tuesday’s result. Black boys and men should expect to be at greater peril under the administration of Trump, who long has been dismissive of police brutality claims and ran on a law-and-order platform aligned with former New York Mayor Rudy Giuliani. Both are advocates of stop-and-frisk policing, which studies showed didn’t impact crime and, more disturbingly, targeted black males. The later finding landed New York City in court, where the policy was found to be discriminatory and unconstitutional.”

Let’s put the presidential election aside for a moment. While I don’t know where Kaepernick lives, I would assume he lives in California and he does support local causes in Oakland. There were several local and state propositions and measures that impact the communities he feels are oppressed. And while he can vote or not vote if he wants, a protest is a show of support – an action to bring about change. He took no action on 11/8, and he missed an opportunity to help the very people he feels are in need. Here are just a few propositions and measures that he could’ve taken action on through voting:

Prop 54: (passed): Conditions under which legislative bills can be passed

Measure LL (City of Oakland, passed): Shall Oakland’s City Charter be amended to establish: (1) a Police Commission of civilian commissioners to oversee the Police Department by reviewing and proposing changes to Department policies and procedures, requiring the Mayor to appoint any new Chief of Police from a list of candidates provided by the Commission, and having the authority to terminate the Chief of Police for cause; and (2) a Community Police Review Agency to investigate complaints of police misconduct and recommend discipline?

Measure KK (City of Oakland, passed): To improve public safety and invest in neighborhoods throughout

Does one need to vote in order to bring about change? Not absolutely…but – damn, dude – back up your words at the polling place. – PAL

TOB: I don’t agree with Kaepernick that it’d be hypocritical of him to vote. As you note, there’s so much more to vote for than the President, even if it’s difficult to know whether the President affects the issue Kaepernick is kneeling for (police violence against people of color). I note Kaep is wearing a Malcolm X hat up top – I don’t have an encyclopedic knowledge of Malcolm X’s voting philosophy, but I have read “The Ballot or the Bullet” speech, and I imagine Kaepernick has, too. Particularly, this passage:

“When you take your case to Washington, D.C., you’re taking it to the criminal who’s responsible; it’s like running from the wolf to the fox. They’re all in cahoots together. They all work political chicanery and make you look like a chump before the eyes of the world.”

But Malcolm also strongly advocates for voting, especially at the local level, so that Black people can control the politics in their own communities. You don’t just vote for President. You vote for the heads of your local law enforcement, the district attorney, and judges. These people directly affect Kaepernick’s issue. And that is why he should have voted.

The NCAA Hypocrisy, Summed Up Neatly by a Whining Multi-Millionaire

This week, Oklahoma’s star defensive tackle Charles Walker announced he was leaving the team to prepare for the NFL Draft. Yes, the Sooners are ranked in the Top 10, and facing #14 West Virginia this weekend, and they have 2-3 more games to play after that. So why is Walker leaving? Walker suffered a concussion on October 1st, and it was severe enough to keep him from playing since. It’s also at least the third of his career. So, he should obviously be very concerned about his long term health and thus earning power. Even moreso because he’s a father:

By leaving the team, he can get financial help – get an agent, seek the best medical care, and the best training for the combine. Good for him, I say. But what does his coach say…

“Quitting on your teammates is hard to take, as a coach,” Mike Stoops said. “That’s everything we stand for — our commitment to one another and, for whatever reason, that wasn’t there for him. He thought this was a better avenue so you would have to ask him for those [answers].”

Let’s be clear about a couple things: Mike Stoops, the former head coach for Arizona, makes $900,000 per year as the Oklahoma defensive coordinator. When he was the coach at Arizona, he made $1.5 million per year. His brother makes $5.55 million this year. I don’t see Bob and Mike loudly supporting their players’ right to make a fair wage. Do you? I don’t see Bob Stoops publicly offering to give up half his salary for his players. Or more – how much money do you need living in Norman, Oklahoma anyways? But you’re so committed to your players, Mike. And this guy who has worked his butt off for your massive salaries is the disloyal guy quitting on his teammates? Go pop another vein out of your head. -TOB

Herb Brooks became a legend to all of the U.S. when he coached the 1980 US Olympic Hockey team to victory over the USSR in what many consider the greatest upset in sports history (the team went on to win gold over Sweden). Brooks, born in St. Paul, is as close to a deity the hockey-crazed state of Minnesota has, so I was surprised to learn a new chapter to his career.

After winning 3 National titles with the University of Minnesota, which, at the time was one of only two Division-I hockey programs in the state, he went on to coach the legendary 1980 Olympic Team, then on to Switzerland before coaching the NY Rangers from 1981-1985. In 1987 he was back in the NHL, where he would coach and scout until his death (car accident) in 2003.

But in 1986 – that year in between his stints with the Rangers and the North Stars – that year might be when Brooks made his biggest impact on hockey in the state of Minnesota. In 1986 the legendary coach went from the New York Rangers to D-III St. Cloud State. He made $23,000, or 1/9 his salary as coach for the Rangers. Prodigal son returns – sure – but why St. Cloud State? It’s not like he grew up in St. Cloud.

“Brooks stayed for only the 1986-87 season, leading the Huskies to their first N.C.A.A. Division III tournament berth (and a third-place national finish) and then returning to the N.H.L. with the Minnesota North Stars. Before leaving, though, Brooks and university officials successfully lobbied the State Legislature to fund a campus hockey arena. St. Cloud State jumped to Division I ahead of schedule in 1987. That encouraged Minnesota State, then known as Mankato State, to make the move in 1996, and Bemidji State in 1999.” 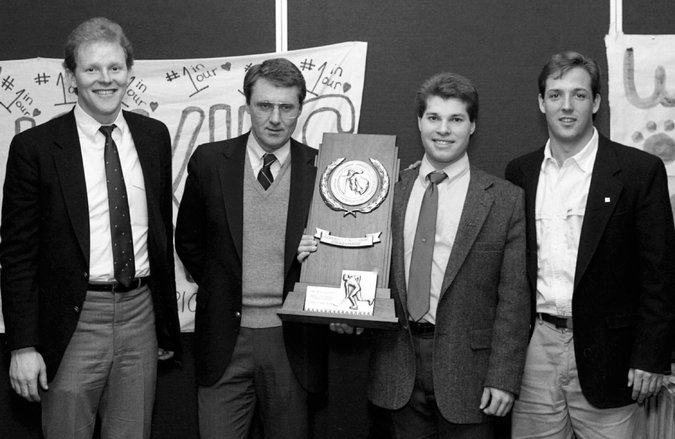 For generations, there was one dream shared by everyone who played hockey: Play for “the U” (yes, that’s what we refer to University of Minnesota – it’s hilarious to anyone who didn’t grow up there, as I suppose it ought to be). In fact, there was a large chunk of Gopher history where coaches recruited exclusively within the state. While that remains a dream, the “U” version of it is less ubiquitous. There are more choices, more Minnesota dreams fulfilled, and – more importantly – those choices are really good programs.

“This season, for the first time, all five have appeared in the USCHO.com national poll. Duluth is No. 2 this week, with Minnesota at No. 7, St. Cloud State No. 12, Bemidji State No. 13 and Minnesota State No. 15.” Note: There are 60 D I hockey program in the country.

At some point, it seems likely these schools would’ve eventually made the transition, but it’s unlikely anyone but Brooks could’ve made such an impact in such a short amount of time. By taking on the coaching gig at St. Cloud State and lending his hero’s momentum, he helped lead the way for the other schools.

As current Gophers coach Don Lucia puts it, “The stronger hockey is in our state, the better it is, not just for the collegiate programs but all the way down to youth hockey. They have something to look forward to.”

What’s more, I think Brooks coaching at St. Cloud State could be a key data point in tracking when hockey went from a state passion to an institution. Witnessing my nieces and nephews as each set out on his or her birthright hockey odyssey of county arenas and summer skating camps and club teams and select teams and local association teams and tryouts and tournaments and parental politics, and on and on. The absurdity of it all is it’s not a dream anymore; it’s a step-by-step plan.

And while the best of the best now either play Juniors in Canada during their high school years and/or treat the University of Minnesota like the Kentucky/Duke for basketball (one and done) – the dream of playing D I hockey began to spread when the great Herb Brooks took a coaching job for a D III school in St. Cloud, Minnesota. – PAL

DOUBLE Bonus Video of the Week

PAL Song of the Week: Neil Young – “Walk On”

“I once told a woman I was Kevin Costner, and it worked because I believed it.”