These are the funniest stories from 2016. Scroll down to find our favorite media from 2016. Some real gems here, folks.

Vin Scully is GREAT. He started broadcasting Dodgers games in 1950. In Brooklyn. He was the broadcaster for the World Series at the age of 25. People of Los Angeles have spent their entire lives with him. As babies, as teenagers, as college dopes driving home for summer. On the way back from the hospital with their first kid, driving away from funerals of parents. Setting out on a roadtrip to the to meet their first grandchild. There has been one constant in a Dodger’s fan’s life: Vin Scully. He has been in the homes and cars of L.A. for 67 years. That’s not a career, that’s a lifetime, and not just his.

Even that – even all of that – does not excuse what I’m about to show you:

00:14 – That mime hug. What a sweet, sincere, grandpa move. Oh, Mr. Scully. Picture of grace and humility. This is too perfect. The Dodger clinch the division on a walk-off home run. Sending out Scully in style.

01:00 – Scully thanking the fans: “Believe me when I tell you I’ve needed you far more than you’ve needed me.” Again, grace and humility. Class act beyond reproach.

01:18 – “Anyway, I wanted to try to express my appreciation to all the players, God bless them, and to all you folks here in the ballpark. It’s a very, very modest thing. I sang this for my wife…” Huh, Vin Scully is going to go out singing a song. That’s pretty cool!

02:01 – Look at all those young bucks down on the field for the Dodgers. They absolutely want to pay their respects. They understand how big of a deal Scully is. They also know there’s about 1,000 beers and champagne just waiting for them. They’re itching to RAGE CAGE. Just waiting for gramps to say his piece.

02:06 – Pre-recorded instrumentation kicks in. So…Scully is going to sing along with Bette Midler, or is this a karaoke situation?

02:20 – Whaaaa? So he wasn’t kidding when he asked the fans if they minded listening…to a recording of Scully singing this song as a much younger man. Seriously, this recording is no doubt from the 80s at the very latest. Also, I cannot believe what is transpiring.

02:24 – Hey, here are fans giving the ol Sign of the Horns while listening to a pre-recorded tape of Vin Scully singing ‘Wind Beneath My Wings’: 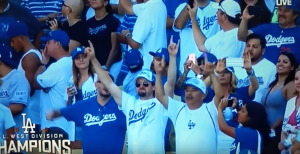 02:45 – Just a warm embrace between manager and player, while a pre-recorded tape of Vin Scully singing ‘Wind Beneath My Wings’ by Bette Midler plays after they clinched the division. No big deal. WHAT IS GOING ON?!?

02:57 – Scully is tearing up with his arm around his wife, and I feel like an absolute asshole. 67 years of work. The man can do whatever he wants.

03:25 – This guy, giving a misty-eyed salute to Vin Scully while a pre-recorded Vin Scully sings ‘Wind Beneath My Wings’ in Dodger Stadium…after the team just won the division. Is this dude attempting to hold his left hand over his heart? God, the Dodgers really are the worst. 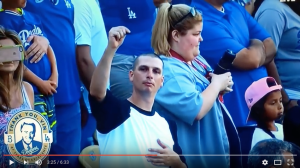 05:09 – This song is still going on! A stadium is going to listen to a pre-recorded Vin Scully sing the entire song. Players getting restless. It’s time to rage, dammit. I ask again, WHAT IN THE HELL IS GOING ON?

05:41 – The song is wrapping up. Everyone applauds on a perfect, sunny afternoon in Los Angeles. Of course they are applauding Scully, but 10% of every fan is applauding that the collective awkwardness is over.

05:59 – The song is not over, but the champagne party has erupted on the field. This image is taking place while a pre-recorded Vin Scully singing ‘Wind Beneath My Wings’ by Bette Midler fades out in a stadium of 50,000 fans.

TOB: Vin Scully is great, and by all accounts is a great person, as this story by ESPN’s Jayson Stark shows. And he’s an old, old man who gets to do whatever the hell he wants…but this was just sooooo awkward. My favorite part was the players on the field, who just wanted to party, man, waiting out this 5-minute song and then going bonkers before the track ends. I love that Vin isn’t really singing along.

Yessssssss. You know it, you love it. Enjoy the 2016 edition of the Minnesota State High School All-Hockey Hair Team. Though it’s a video, it deserves its own post. -TOB

Black Man Discovers Hockey; Mad That White People Have Been Hiding It

This is one of the funnier articles I’ve read in a while. Thank you to loyal reader Ryan West for alerting me to it. Twitter user @soloucity aka Tony X. was attempting to watch the St. Louis Cardinals game the other night. But when he tuned in to Fox Sports Midwest, he found the St. Louis Blues, in a Game 7 against the Chicago Blackhawks. Tony X is black, and had apparently never seen hockey before. But he loooooooved it, and live tweeted his experience:

I especially love when he accuses white people hiding it all these years:

White people been hiding hockey from us for years bruh. This shit lit

Or when he found out there are black professional hockey players:

White people been hiding hockey from us for years bruh. This shit lit

The Blues won, and hockey won Tony X over. He promises to live tweet the next round. I can’t wait. -TOB

PAL: Good find, TOB. His reaction to the goalie being pulled is my favorite. And – hey – anything’s better than watching the Cardinals. 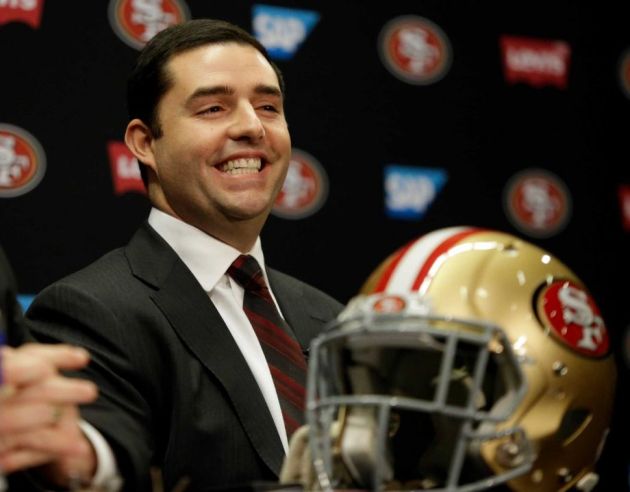 I loathe Jed York, so I love this story. Tim Kawakami is a longtime writer for the San Jose Mercury-News. A few years back, before Jed ripped the 49ers from San Francisco and moved them to strip-mall-haven Santa Clara, Kawakami tweeted that, if the 49ers finished Levi’s Stadium in time to open the 2014 football season there, he would buy Jed York lunch. It was likely a throw-away joke. Writers say stuff like that often. But the 49ers did open 2014 at Levi’s, and Jed cashed in the bet, even though it wasn’t really a bet because Jed did not have anything on the line to Kawakami. And where does Jed have Kawakami take him for a meal? Chipotle? Subway? Quizno’s? Some other perfectly Santa Clara lunch spot? No. Oh, no. Not Jed. In fact, he doesn’t make it lunch at all. They go to friggin French Laundry in Yountville, at $700 per person. Is Jed magnanimous? Nope. In fact, he sticks Kawakami, a sportswriter, with the bill. And he also makes Kawakami pay for Jed’s wife, for a total bill of $2,100. Kawakami told the story this week on a podcast and said:

“If I thought Jed was sticking it to me, I’d almost be okay with it. I don’t even think he knew. I don’t think he knew what $2,100 means to a sportswriter who didn’t inherit a billion-dollar team.”

My first thought was, “Well, there must be another side to this story. Surely, there must.” But then Jed York released the following statement:

“The bet took place two years ago and Tim has never shared his concerns about the dinner with me,” York said. “I am happy to speak with Tim one-on-one so we can all move forward.”

Nope. ifThis rich a-hole just decided to make Kawakami pay $2,100 because that is what rich a-holes do. Note that Kawakami also made the bet to Matt Barrows, another writer who covers the 49ers. Barrows was also present at that dinner. Barrows paid for himself.  Jed, you are the worst. -TOB

Chaunce. Couger. Blaze. These are not what the cool kids are calling weed these days; rather, these are some of the names on the University of Albany Lacrosse team. Barstool Sports caught this one flush by simply posting the roster of the team, their bios, and adding just a touch of commentary. For a solid laugh, please go check out the entire roster. Here are some of my favorites, followed by the Barstool commentary:

Feel like I’m really missing out by not having a dude named Cougar in my immediate friend group. I’m friends with guys named “Scott” and “Mike” and it’s just all super white and super boring. If we brought Cougar into the mix, I’m sure that would spice things up a bit. 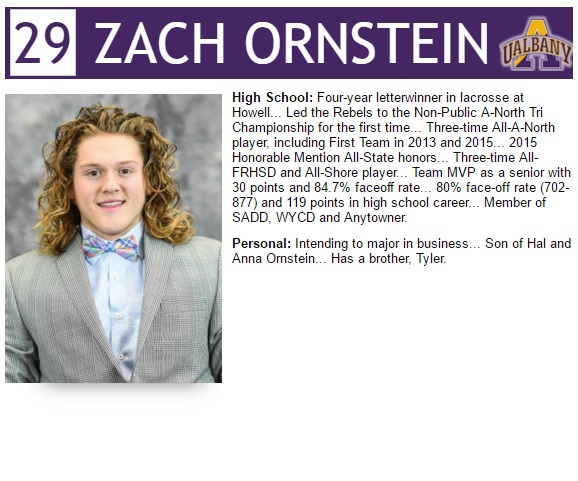 Looks like if Spicoli and some frat star at Georgia or some shit like that had a love child. “Intending to major in business” is sneaky hilarious. Just a great euphemism to say that he doesn’t go to class ever, just chills in his room, smokes weed until lax practice, rinse, repeat. 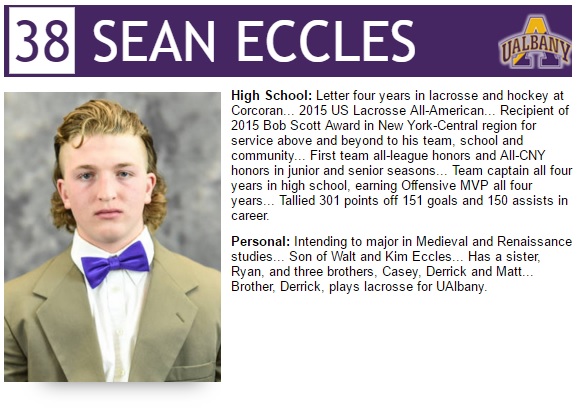 In comes younger brother Sean who has a bit of a cleaner look to him but you can tell that there’s some bad boy just itching to come out. He’s only a freshman so we’ll check back in a few years to check in on his progress by senior year.

Big shoutout to Meagan Hutcheon, a proud University of Albany alumna, who brought this gem to my attention. – PAL

Source: “I Wouldn’t Bring Your Girl Near The UAlbany Lacrosse Team If I Were You”, Jordie, Barstool Sports (4/2/16) 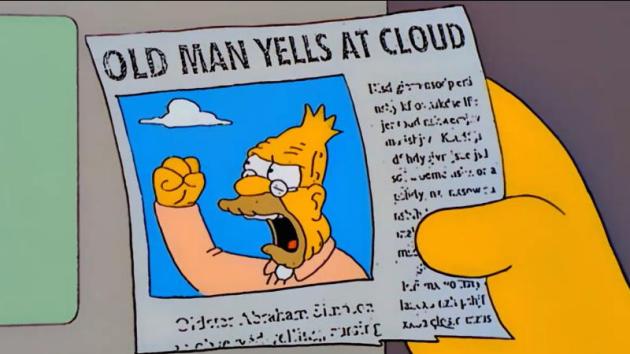 That’s how you get back on the horse, Day Day

Draymond Green made some news last weekend, if you didn’t hear. Let’s just say he took a page out of the Anthony Weiner playbook. One might think, after a big mistake like that, a public personality like Draymond Green might take a break from social media. Nope! And I’m glad he didn’t, because he gifted the public his review for some of the USA Basketball team players hair. As the kids say, he kept it 100: 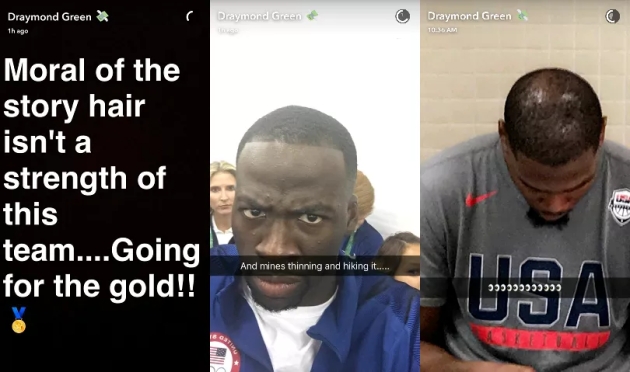 Now THIS is what social media is for, Draymond. Good work. – PAL

TOB: I’m still on Team Draymond. There are things he could do to make me leave Team Draymond, certainly, but they are up there at the Baylor/Penn State/Greg Hardy/O.J. levels

No, Seriously: You’re a Weirdo, Jim Nantz. Cut it Out.

You just gotta watch this video. Jim Nantz talks about how every year after the college basketball title game he removes his tie and presents it to a senior on the winning team.

He looks so creepy and sounds so self-important while saying it. And, by the way, he didn’t even end the title game with a dumb pun this year! I was super mad at you for not giving me the ammo I needed to make fun of you. And then you gave me this. Bellisima! 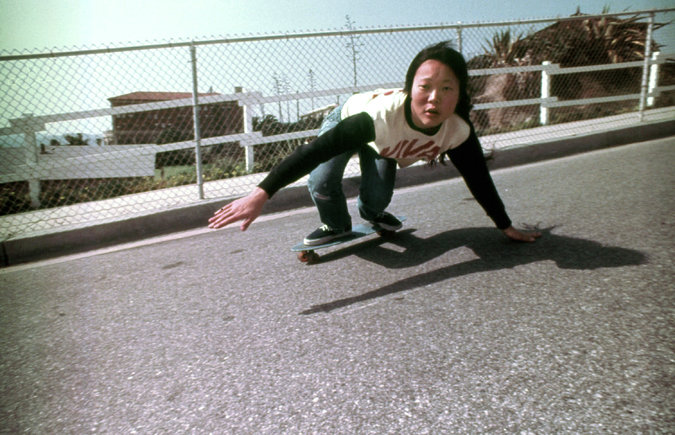 Thanks for reading, everybody!