The force was strong.

C.T.E. sure seems real. Of the 96 N.F.L. players who’ve donated their brains to C.T.E. research, 92 have been found to have been diagnosed with chronic traumatic encephalopathy. For the N.H.L. players, it’s an ominous 5 for 5. Between the two sports, 97 of 101, or 96%. If you want more qualitative data, check out the story we posted a couple weeks ago about Zac Easter, or check out the HBO Real Sports segment on Kevin Turner. Every early indication tells us the dam on C.T.E. has already broken, and we’re just waiting for the flood.

With that known, I’m flabbergasted by the N.H.L. right now. After watching a far bigger entity in the N.F.L. settle and get the hell out of the way, the N.H.L. is taking a wait and see approach to C.T.E.

In the fall of 2016, N.H.L. Commissioner Gary Bettman planted his flag on the following hill:

Furthermore, the N.H.L. has “demanded troves of information from research done by neurology experts at Boston University who have examined the brains of more than 200 athletes for C.T.E. and have done groundbreaking work on the subject.”

Bull. For one thing, The N.H.L. is not an impartial party. Also, the B.U. research – some published and some unpublished – is based on donations provided under the condition of anonymity and are protected by medical privacy laws. And for good measure, most of the people who donated their brains never played hockey.

What is the N.H.L. thinking? The N.F.L., which pulls in 3x-4x more in revenue per year ($4B for N.H.L. vs somewhere near $13B for the N.F.L.), wanted no part of a class action lawsuit and settled more or less right away with former player. It makes sense. From a league standpoint, there is no victory here. You can even set aside the science, and – you know – loss of life. There is no dollar amount you can place on the P.R. nightmare.

If you’re not so sure – again – I encourage you to read Zac Easter’s story or watch the Kevin Turner segment on HBO.

This article does a great job showing the N.H.L’s response within an even scarier context: Big Tobacco back in the 50s. Research came out connecting smoking to lung cancer. Their response: Let our folks take a look at the research.

How does the saying go? Something about history and being doomed to repeat itself? Get your head out of the sand, Bettman. No league is too big to fail, especially not yours. – PAL

Alex Mack (Go Bears!) is the best center in the NFL. Maybe the best offensive lineman. The dude just played the entire Super Bowl with a broken leg, and played well. Alex provided, to me, the most interesting story of the Super Bowl. In the week before the game, he was asked who was the best high school football player he ever saw. Alex thought about it and dropped the name Duncan Krier, a childhood friend and high school teammate. The reporters had never heard of Duncan Krier, and the L.A. Times’ Bill Plaschke did some digging. He eventually found a Duncan Krier working as a ticket salesman for a minor league hockey team in Portland. Sure enough, it was Alex’s old buddy. 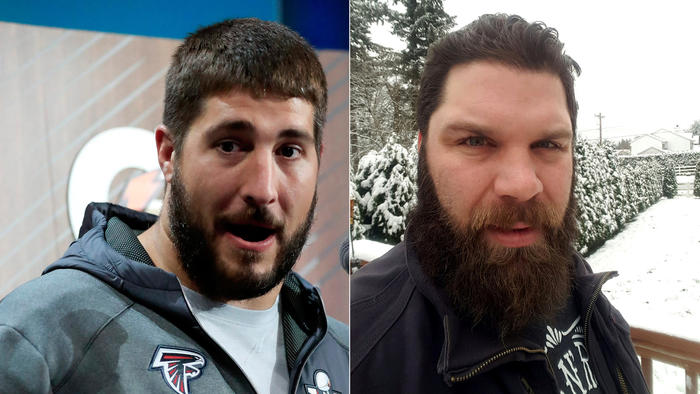 It reminds me of the story we featured on go-kart racer Terry Fullerton, who the great Ayrton Senna said was the best driver he ever faced. Was Alex being serious about Krier?  Krier seems to think so, lamenting the knee injury that ruined his football career before he even left high school: “That’s wild. That’s insane. Holy hell. Alex really said that about me? The crazy thing about it is, I think he’s probably right. And I still think about that almost every day.” I’m not so sure. I think Alex was looking back on the road that led him to the pinnacle of his profession, and taking a moment to remember someone he cared about and lost touch with along the way. Krier said he hadn’t spoken to Alex in 12 years. Maybe this was Alex’s way of reaching out to his old friend. I hope the two can reconnect. -TOB

“For every Alex Mack, there is a Duncan Krier. For every star, it seems there is an equally bright light who grew up alongside him and yet somehow faded. Maybe it was injury. Maybe it was fate. Whatever it was, it illustrates the fine line between a man playing in the Super Bowl and a former teammate watching on TV.

“It is a line so thin that their career paths may have diverged with one play. Yet it is a barrier so thick that when one of those fallen stars is mentioned in a Super Bowl news conference, a reporter must resort to Google to determine whether he even exists.”

Sometimes we feature stories that make me think, “Man, this is why I love sports.” This is not one of those stories. While sports can bring out the best in humanity, it can also bring out the worst, and that’s the case here. In an excellently reported piece, Matt Stanmyre and Steve Politi of NJ.com uncover a brewing scandal. Paterson Eastside High School in Paterson, New Jersey’s boy’s basketball coach, Juan Griles, has been finding kids from across the globe and moving them into his two-bedroom apartment and becoming their legal guardian, all so they can play basketball.

That’s a little shady, but it gets worse. As you might imagine, Griles is not doing this out of the kindness of his own heart. At present, approximately six players are living in his apartment. The players complain of lack of food. One player said they were fed spaghetti for dinner was spaghetti for “a whole two weeks” or worse, “just a loaf of bread to last two people for like two weeks.” And, of course, if the players don’t produce, they are exiled. One players, having been kicked out of the house, “was found alone and hungry by a district teacher after spending a night alone in a local Dunkin’ Donuts.” Christ. The coach denies wrongdoing, but a child protection investigation is underway. This story is crazy. It’s HIGH SCHOOL BASKETBALL. There’s not even a lot of money at stake. It’s just ego. I’m disgusted. -TOB

PAL: What more is there to add? Sports can bring out the best – especially in kids – and it brings out the worst in adults.

I don’t get autographs. I don’t get pictures with celebrities. What do they actually mean, and what story do they tell? You happened upon someone by dumb luck. We know this person. They signed this thing, and that’s proof that you met them. The end. Cool story, bro.

Golfer Jordan Spieth recently ranted about adult autograph seekers. There’s no real story here, other than to agree with Spieth. While I don’t love the goodie goodie “they swore in front of kids” argument from the golfer (spoiler alert: Welcome to the big bad world – people swear in public, especially at sporting events), Spieth is right. Who are these guys, and – honestly – how much does a Jordan Spieth autograph go for on Ebay (between $100 – $1000). What a fun way to make a living.

Hey, younger, successful person. Sign your name so I can put it online and profit off of your success.

Get a life. Honest to god – can someone explain autographs to me? Here’s a autographed golf ball from Spieth, going for $750 on ebay. Signatures and dimples do not mix.

My dad has a pretty solid collection of signed baseballs (Willie Mays, Bob Feller, and a J.D. Drew ball signed while he played for the St. Paul Saints during his holdout with the Phillies…cherry) – maybe he can explain it to us. I must note that my dad didn’t hound players for their autograph. He paid a premium to buy them in a store with a nice plastic case like any self-respecting adult would. – PAL

Source: “Jordan Spieth Has Had It With Professional Autograph Seekers”, Tom Ley, Deadspin (2/8/17)

“So, you see, the puppy was like industry. In that, they were both lost in the woods. And nobody, especially the little boy – ‘society’ – knew where to find ’em. Except that the puppy was a dog. But the industry, my friends, that was a revolution…Knibb High Football rules!”