Ball Zero, Take Your Base

This week, MLB Commissioner Rob Manfred announced the league is scrapping going through the motions of making four pitches on an intentional walk, in order to save time. Managers will now just signal from the dugout. For the record, there was one intentional walk last season every 2.6 games, so if you assume each intentional walk takes 60 seconds, they are shaving maybe 20-25 seconds from each game. The impact on game length is negligible. MLB is right to want to cut down on the dead time of a game, but this is not the solution. It’s not even a solution. It’s an attempt to look like you’re trying to solve a problem when you aren’t.

When the news was first announced this week, I couldn’t decide how I felt. Phil and I were at the Giants 2014 NLDS game when the Nationals tried to intentionally walk Panda, with Posey on third. The pitcher overthrew the catcher. Posey sprinted for home, but was tossed out.

It was still so exciting! I thought of that play immediately upon hearing the news this week. And there’s so much more we will miss, as Grant Brisbee points out. First, pitchers with the yips, like in the play above.  Second, the fake intentional walks, like this:

Third, when the pitcher doesn’t quite get it far enough outside, and gives up a hit:

Fourth, those moments you can’t even predict. Grant relays this great story:

In 1976, Rod Carew was being walked with a runner on second in the 11th inning. This was in a stretch where he had hit .350 or better in each of the last three seasons, so you can get the strategy. But Carew swung at the first two pitches. Not real swings, and not with the intent to put the ball in play. He did it just to get the two strikes on him.

It was hubris. Earned, hilarious hubris of the most magnificent order from one of baseball’s greatest hitters. The intentional walk went on as planned, and the Twins won the game in the next at-bat anyway.

And, finally, the best of all – the home crowd booing. BOOOOOOO:

One of the many best parts of going to a baseball game is getting a couple beers in you and then booing the hell out of some poor schmo, just because. And an intentional walk is a perfect such opportunity. Listen to those boos, Manfred! Those aren’t bored fans. Those fans are ENGAGED. The intentional walk allows for a full minute of booing. It’s cathartic! It’s fun! That’s now gone, replaced by a “huh, what just happened…oh, huh” moment, as fans realize why the hitter is suddenly trotting to first. Congrats. You just saved 20 whole seconds per game. -TOB

I’ve never heard of the fake intentional walk, and I can’t believe this actually happened in the World Series involving two hall of fame players (Johnny Bench and Rollie Fingers). What a cool surprise. This is the inane minutia that baseball fans love, love, love to bring up over a couple beers, so – yeah – we better get rid of it.

(Rant Alert) How Much Longer Do the Warriors Put Up With Draymond’s B.S.?

Draymond Green is very good at basketball. He defends, rebounds, scores, and keeps the ball moving in a lineup with 3 of the best 15-20 players (depending on where you put Klay) in the league.

Does this rant sound familiar? I opened another writeup about Green pretty much the exact same way on 10/21/16.  And the only thing that’s changed in the time since is Green’s scoring and rebounding (they are down, but the addition of Durant is a big part of this, too).

Steve Kerr and the Warrior’s must be so sick of the Draymond sideshow. Another kicking incident Thursday night (they are not incidental). Another night going at his coach after getting another technical foul…And another Warriors dismantling of the Clippers, complete with a 50-point quarter.

The answer to how long the Warrior’s put up with this is obviously tied to their ability to win at an alarming rate and Green’s essential role in the revolutionary style of small ball. But know that there’s some serious eye-rolling in that locker room right now, and it’s directed at Green. They have to be sick of answering questions about him acting like a jackalope all the time.

Chemistry does matter, I just wonder if the Warrior’s are simply too damn good for it to matter for them. Afterall, winning a championship is hard, even for a team this good.

Oh, wait, they lost last year! They choked up a 3-1 series lead in historical fashion. A major contributing factor was that Green was suspended from game 5 of the Finals due to exceeding his limit of flagrant fouls in the playoffs (not just the groin smack on James). He had to watch game 6 of the NBA finals from the Oakland Coliseum, for crying out loud, and he’s still pulling this crap.

The act is getting old, Green. I love you, man, but stop kicking people and stop showing up your coach. – PAL

TOB: Yeah, maybe they lost the Finals because he missed Game 5. But he played one of the greatest Game 7s in history, in defeat, and he is the straw that stirs their drink. Without him, they are soft, and don’t play much defense. He allows them amazing versatility. So, unless they find someone who gives them what he gives, they won’t get rid of him – because they won’t win 73, or go up 3-1 in the Finals, without him.

PAL: If they are soft without Green, then he should take some pride in that and figure out a way to stay on the court when it matters most.

AT&T Park: What Might Have Been (Awful. Really Awful)

For my money, there’s no better setting to watch a sporting event than the San Francisco Giants’ AT&T Park. And, as John Shea points out, we can officially put the possessive apostrophe on that, because this past December, the Giants made their final debt payment on the stadium. The Giants officially own their privately-financed stadium. It sure is a gem. But…it almost wasn’t. Thanks to McCovey Chronicle’s Grant Brisbee for linking to this Chronicle article from 2011, looking back at many of the failed stadium proposals in San Francisco history. And…it is not pretty. Just look at some of these monstrosities:

Alas, we got this: 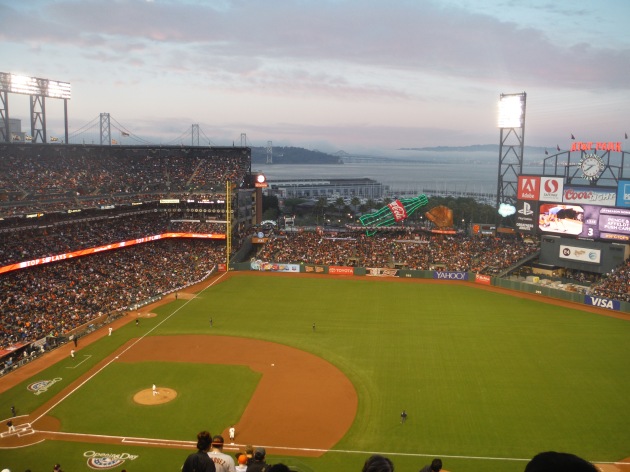 And it is good. Rejoice, Giants fans! And get ready for some baseball. It’s just around the corner. -TOB

PAL: Pflueger was ahead of his time proposing a baseball-only stadium back in 1982. Everything he says is right and in line with the baseball stadiums built in the past 20 years. Baseball only facilities. 40-50K seats. Better sightlines for baseball. Cheaper to construct…God, I’m so ready for baseball that I’m responding to a story about stadiums that were never built and I almost wrote about what amounts to a youth baseball tournament in Panama.

PAL Song of the Week: Willie Nelson – “Will You Remember Mine”