Here’s a really cool story about the technical feats behind the birth of March Madness as we know it.

While some think the Bird-Magic game in ‘79 ignited a national obsession with the NCAA Tournament, this article makes a strong case that March 14, 1981 was the real moment the match was struck.

That day helped define the careers of many involved (both positively and negatively) — and changed how we experience sports today thanks to some ambitious TV youngsters willing to try something different and the luck of three games decided in the last seconds.

As writer Tim Layden puts it, before March 14, 1981, the tourney viewing experience was “very primitive: NBC, which held the rights to the NCAA tournament from 1969 to ’81, would broadcast the day’s games regionally, but in general would stay with games to their conclusion. You got your two or three games and that was it. For the rest you got highlights at 6 and 11 (again, ESPN was just ramping up) or a story in the next day’s newspaper.”

The goal for 1981 was different: Put on as many close games as possible. Seems obvious now, but NBC was still living down the “Heidi Game”. 13 years prior NBC cut away from a Jets-Raiders game to show a TV movie. The Raiders then scored two touchdowns in the final minute to complete the comeback…with no one seeing it on TV.

Still, the producers and board operators went for it, even while admitting they didn’t know what the hell they were doing. The logistics of it are hilarious.

Instead of a comingled headset, Aagaard had a bank of landline telephones, each connected to a game site. If Ohlmeyer called out a switch, Aagaard would pick up the phone and execute the change by talking to producers in a coordination room in New York and the production crew on site. (Bryant) Gumbel (in-studio host) was the traffic cop charged with receiving from one site and tossing to the next.

They couldn’t have picked a better day to try this out. 3 buzzer beaters in one day: St. Joe’s over DePaul, Arkansas over Louisville, Kansas State over Oregon State. 2 of them within 47 seconds of real time, all before a network audience.

The article also tracks all the key players on this day. The players that became local legends and the players that fell hard. The producers that became TV executives, and the sportscasters (Marv Alberts and Bryant Gumbel) well before their apex. In the broader context, the tournament became what it is today back in 1981.

Wherever it was that the NCAA tournament lived in the sports pantheon before March 14, 1981, it lived somewhere bigger and better afterward, someplace more significant, and certainly more profitable. Broadcast professionals took chances that day that helped make their careers. Basketball players succeeded and failed in such outsized ways that it defined their legacies. Because of what transpired that day, and where it fell on the continuum of the game, there has never been another day quite like it.

You have to remind yourself that this was not how sports were broadcast in 1981. And the fact that we come to half expect this nowadays is only further proof how pivotal this moment was. A Fun and fascinating behind-the-scenes look at a cultural phenomenon. – PAL

Look, Alex Pflepsen is just wrong. And I feel comfortable saying that because I have a self-given platform and he does not. The World Baseball Classic is great, even though I couldn’t watch a single game because I apparently don’t get the MLB Network despite paying a pretty penny for satellite television service, a fact I didn’t realize until I tried to tune into the U.S./Dominican Republic elimination game on Saturday night. I did follow what I could on Twitter, and enjoyed seeing the highlights, though. I also did get to watch the final on ESPN2…en español. And of course it was a blowout. Marcus Stroman, who almost played for Puerto Rico, no-hit the Puerto Rican team for 6 innings, and the U.S. ran away with it 8-0. But it was still a blast. For one, Latin players and fans know how to have fun, despite what Herbs like Ian Kinsler say, about how Americans know how to win The Right Way (read: boring as hell). Perhaps to Kinsler’s chagrin, teammate Stroman certainly had a good time:

More than being great theatre, the WBC is catching on. Ratings were up 32% from 2013, and attendance totaled 1,086,720,  The best part about the WBC is it is FUN. The players are having a blast. No one is worrying about getting earholed for celebrating too much, because everyone is too busy celebrating to care.

But the WBC did call attention to one problem. Monday night’s semifinal between Puerto Rico and The Netherlands seemed (again, I couldn’t watch) like great theatre. And then they got to the 11th inning. The WBC is using the rule MLB has kicked around as a possible future rule change – beginning the 11th inning, each team starts with runners on first and second. The results were predictable and awful. Both hitting teams opened the inning with a sacrifice bunt, moving runners to second and third. Both pitching teams responded with an intentional walk. The Netherlands’ 11th inning ended in a double play. Puerto Rico’s ended with a sacrifice fly to win.

If MLB implements this stupid rule, get ready for a lot of sac bunt/intentional walk/sac fly sequences. What a terrible way to end a great baseball game. I get that MLB wants to shorten game times – but the key to that is to cut time between pitches, not to actually shorten the games. Baseball is a fantastic game that doesn’t need fixing. Just let baseball fans enjoy baseball, damnit! And, players, lighten up. Be more like the WBC. The WBC is good. -TOB 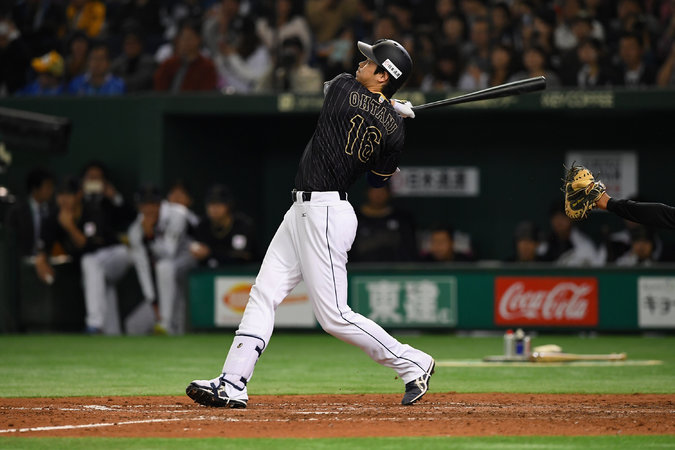 Consider this a really long response to TOB’s post above. The WBC is also an opportunity to watch the next crop of international players making their way to Major League Baseball. Which is why it’s such a shame we weren’t able to watch Shohei Otani of Japan.

Otani, 23, is a legit power prospect — as a hitter and a pitcher. Over his career on the Nippon Ham Fighters, he’s posted a 2.49 ERA as a pitcher (10+ strikeouts per nine innings). This past year, he belted 22 HR, hit .322 in the 144-game season on his way to MVP honors. It’s no surprise MLB teams have taken notice.

Stalwart Japanese prospect: We’ve heard this story before, right? Aside from Otani’s hitter-pitcher talents, what makes this story interesting is how new rules around international players is putting a tough financial decision in front of Otani.

Ken Belson explains it as follows:

Major league teams that want to negotiate with Otani must offer a posting fee to the Fighters (his current team) that would be paid only if they reached a deal. The Fighters will almost certainly set the fee at the maximum: $20 million.

Under the new rules, (MLB) teams are subject to a financial cap for certain international players who are not free agents. To be exempt from the rules, a player must be at least 25 with six seasons in a foreign professional league, but Otani will not meet those criteria until after the 2019 season. The salary cap previously applied to players who were 23 and had five years of service.

Most teams will have between $5 million and $6 million to spend on international players subject to the new rules, though they can trade with other teams to increase their pool of money. Even so, the cap limits how much teams can possibly offer Otani for his first year.

Otani’s clearly a big league prospect right now. So the decision before him is as follows: Does he wait until after the 2019 season (3 years!) to become a free agent, hope his stock continues to rise, and demand a massive contract from an MLB team; or does he accept a one-year, 5-6M contract now, in hopes of signing a second, ideally monster MLB contract the following year at a younger age?

Current Yankee Masahiro Tanaka’s advice to Otani: Get to the MLB as soon as possible. His rationale is pretty simple: “If you have what it takes, I think the younger you are, the better contract you get.”

It should be noted the team that currently holds his rights will almost assuredly allow him to leave, as they would receive $20M posting fee from the MLB that signs Otani.

“With the exception of the Yomiuri Giants, the country’s most famous team, almost all Japanese teams are unprofitable and view posting fees as a way to balance their books.”

Solid read on the international impact on MLB in the wake of the WBC. I have to say – I got into the tournament the past weekend. The players looked legitimately pumped, and it’s cool to see Adam Jones (USA) robbing Orioles teammate Manny Machado (Dominican Republic) of a home run. The tournament needs a real moment, though, and I wonder if it comes in the form of a phenom of a Lebron or Gretzky magnitude to introduce himself to the world by way of the WBC before ever putting on an MLB uniform. – PAL

TOB: Good lord, those rules are frustrating. Otani is screwed – I don’t see why an MLB team would try to sign him now if he’s looking for a 1-year deal. What team is willing to pay the $20 million posting fee, plus their entire annual international signing allotment of $6 million for a 1-year deal, and risk Otani leaving for another team as a free agent after that?

LaVar Ball has been talkin a lot of trash – that he’d beat MJ one on one (note: LaVar scored 2 points per game as a college player at Wazzu). He also said his son, Lonzo Ball, who is a great college point guard as a freshman at UCLA , is better RIGHT NOW than Steph Curry, the two-time defending NBA MVP. The list goes on. This week he appeared on ESPN and argued with Stephen A. Smith:

Hmm. Ya know what? I gotta admit it. He won me over. He’s ridiculous. But that was hilarious. -TOB

PAL: God, all of this sucks. Stephen A. Smith sucks. ESPN is dying, they know it, so they run daily updates on Tim Tebow’s minor league at-bats and shouting matches between an overbearing sports parent and a professional carnival barker because it gets clicks today. This entire thing — you guessed it — sucks. The main reason LaVar Ball sucks most of all is, as Max Kellerman points out in this clip, daddy’s doing all the talking while his sons will have to back it up. I wish the kids all the best.

I know he’s just trying to impress those cheerleaders… -TOB

PAL Song of the Week: Jeff Buckley – “Mama, You’ve been on My Mind” (Bob Dylan)

“Who is Jeff Broccoli, Dad?”