Tuesday night started out so well. I walk into Irish Times in the Financial District about 5 minutes before the first pitch. I’m decked out in my Twins sweatshirt and hat, and there’s TOB saving a spot at the bar directly in front of a TV. 5 minutes later, Rowe walks in and suggests a shot to kick things off. Dozier leads off the game with a home run. Later in the inning Rosario yanks one out to right, and the Twins are up 3-0 in the first inning. We take the shot. Girardi has to pull the Yankees starter after ⅓ of an inning! I sincerely believe this is shaping up to be a Twins route in Yankee stadium.

The Yankees stop the bleeding and hold the Twins to the 3 runs in the first. The Twins starter then walks the leadoff hitter – a terrible sign. Things get worse from there. Buxton injures his back on a very good catch, and the Yankees power their way back, handing Minnesota its 13th straight playoff loss. A 13-game losing streak in the playoffs is, well, historically bad.

Yes, the night started out perfect, but then the Yankees were the Yankees and the Twins were the Twins, and the nachos were soggy, and the beer — the beer is always good. I really thought they were going to do it this time, but just like that, the postseason began and ended in a night for my beloved Twins and me.

But I love the play-in game.

I love playoff baseball. Playoff hockey is great, but for there’s nothing better than playoff baseball. Every moment of the game with no clock is filled with importance, and as a fan there’s nothing better than that sustained focus building to crossroad moments in the game. Playoffs in any sport can drag on for months, so it’s cool to have it start with an elimination game in both the AL and NL.

I had no rooting interest in the Rockies-Diamondbacks game on Wednesday night, but I couldn’t help but look over Natalie’s shoulder at dinner to see the D-Backs reliever smack a 2-run triple late in the game, only then to give up back-to-back homers in the top of the next inning.

MLB has gotten a few things wrong in recent history – the All-Star Game determining home field advantage in the World Series, interleague play, the DH, and – you know – turning a blind eye to steroids, but they got this play-in game right, and I love it. – PAL

TOB: I agree. It’s fantastic (though this is easier to say because my team is 2-0 in the Wild Card game. If they were 0-2, I’m sure I’d be bitter). As usual, Grant Brisbee nailed it for me:

There was some chatter earlier on Tuesday, spurred by Ken Rosenthal, that if the Yankees lost, there would be calls for change. It’s right there in the headline.

And now we’re here. I’m here to argue that here is the best possible format.

Start with the idea of the wild card. I hated it, but I came around to it. It was the homework pass you didn’t deserve, but almost did, so you didn’t even feel guilty. By the time the Giants and Angels met in the first all-wild-card World Series, it wasn’t even a big deal. The wild card took all the heat, but what about that weirdo third division winner? They had things to answer for, too.

It was still a little weird. The Marlins have two World Series titles, but they haven’t won a division title in franchise history. The Rockies have a pennant without a division title, and they’re going for another one. There was something a little too cavalier about a wild card team waltzing in and feeling that entitled. They needed one extra obstacle.

This. This one game is that one extra obstacle. It’s just enough to make the team desperately want the division title. It’s not enough to make a team feel like they’re sitting in the corner of the postseason with a cone on their head. It’s an extra chance on the reality show, a Golden Scepter of Redemption that’s handed out by the winner of last week’s challenge. They get to have a deathmatch game. 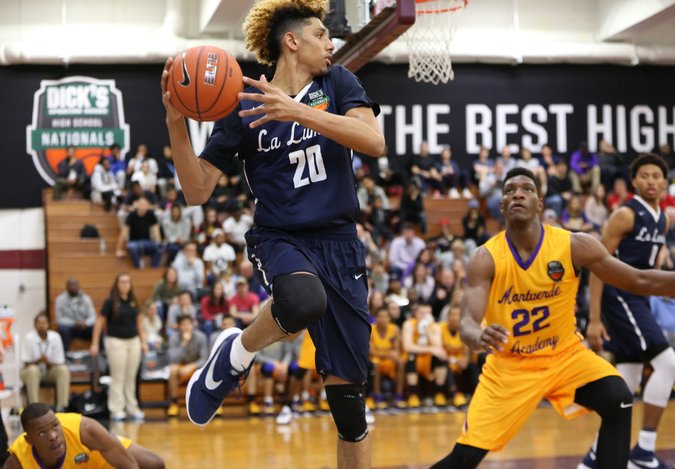 A major story broke last week that we didn’t get to in our post. By now, I’m sure you’ve heard about the FBI investigation into bribery and fraud that involves seemingly every thread between top tier basketball recruits, AAU club teams, sports agencies, shoe companies, and college basketball programs.

I’m sure I’m leaving elements out here, but for the purposes of an overview, here’s my summary: AAU Teams are sponsored by shoe companies. Those shoe companies also have contracts with colleges. Those shoe companies are also woven in with sports agents and/or financial advisors. The idea is to get the best recruits on AAU teams that sponsored by a shoe company, then get that recruit to commit to a college that is also sponsored by that shoe company. Money is given to the player or player’s families through a variety of intermediaries in exchange for going the right school. Those that help finance the deals are then in an advantageous position to represent the player once they are drafted.

It’s not a shock that this has been going on, but until now the full view of the scandal hadn’t been exposed. Adidas and Nike are involved, and there are a lot of NCAA basketball coaches sweating it right now. Rick Pitino has already been placed on unpaid leave, as have many other assistant coaches at Arizona, USC, Oklahoma State, Auburn. It sounds like we’re just seeing the tip of the iceberg so far.

There are a ton of stories out there about the scandal, but I found a couple to be particularly interesting.

This New York Times article does a nice job explaining the scam through one player – Brian Bowen. Widely considered one of the best high school players in the country, Bowen delayed his commitment all the way into the spring of this year (the last day for D-1 players to sign a letter of intent in May 17, and most players sign well before then). He listed his final options as North Carolina State, Michigan State, Arizona, Texas, and Creighton. Then, in June he finally made his announcement: Louisville.

Louisville coach Pitino had this to say about Bowen coming to Louisville: “But they [Bowen and I’m assuming his family] had to come in unofficially, pay for their hotels, pay for their meals. So we spent zero dollars recruiting a five-star athlete who I loved when I saw him play. In my 40-some-odd years of coaching, this is the luckiest I’ve been.This is the luckiest I’ve ever been.”

That, or he was paid $100K, and Bowen committed to the highest bidder.

Which brings us back to Pitino and Louisville AD Tom Jurich. It sounds like the weren’t just benefiting from paying players to help them succeed, rather, they were profiting millions from shoe companies.

This from Andrew Wolfson of the Courier-Journal: 98% of the current deal between Adidas and Louisville goes to…Rick Pitino.

“In 2015-16, for example, $1.5 million went to Pitino under his personal services agreement with the apparel company while just $25,000 went to the program, according to a contract obtained by the Courier-Journal under the state public records act.”

Adidas and Louisville just announced a new 10 year/$160MM ($79MM in cash) contract that is set to start in July, 2018. It is unclear how much of that will go to coaches.

If you take the time to read through these articles and can still look at me and tell me these kids are student athletes, then I don’t know what I could say to change your mind. This investigation was the tipping point for me. Yes, the vast majority of soccer players and swimmers and cross country runners competing at colleges big and small are student athletes. Big time football and basketball players are not. Why should sleazeball Rick Pitino be able to get filthy rich off of them while they are forced to take money under the table.

I want to say that we need to get rid of the rule prohibiting high school players from entering the draft, and we need to crackdown on the influence apparel companies have on youth basketball, but the fact is college football and basketball are billion dollar industries. We hear the word ‘college’ and we associate our college experiences with what’s going on at major programs like Louisville, Arizona, and USC when in fact the only similarity is the shape of the ball and the dimensions of the court. – PAL

TOB: If they’d just pay players, we’d avoid this whole charade. There’d be less money funneled to coaches. There’d be less money funneled to hangers-on and “managers”. There’d be no pressure on players to sign with certain agents or shoe companies upon entering the NBA. This “scandal” wouldn’t exist. But it does, because the NCAA insists on holding onto the archaic and B.S.-from-its-conception concept of “amateurism”. I think this scandal may be the tipping point for the NCAA. Adapt or die.

The G.O.A.T Is A Habitual Wedding Crasher

This is a funny, sweet story, right? He’s either finishing up a round of golf and there’s a reception going on in the clubhouse, or he’s on the road staying at a resort. He goes in and congratulates the new couple. Understandably, the party freaks out. It is Jerry Rice. He stays, he dances, he takes pictures.

Or, is it a bit sad? Jerry friggin’ Rice says he crashes at least one wedding per weekend. One per weekend? It makes for a great wedding day story, but it kind of feels like a guy that wants to be around happy people on the happiest of days who are even happier to see him.

Maybe I’m overthinking this. Maybe it’s just a great story, and the G.O.A.T. gets joy out of making someone’s big day even that more special. Just thinking about Rowe freaking out and crying at his and Adrian’s wedding at the sight of Jerry Rice is a good time. – PAL

TOB: He’s always struck me as a strange dude, so this is not surprising. It’s funny, but also weird.

Here’s a fun one. Joel Embiid, the 76ers’ 7-foot Cameroonian center was seen on film on a late night run through downtown. He’s hard to miss, and so his run was caught on film. As are all the other things he does around town. Like, late night tennis:

This is amusing to me, and Dan McQuade, Philadelphian, nails why:

Joel Embiid is a 23-year-old living in Center City who works out by running down Pine Street. He goes to Center City Sips. He is basically doing exactly what I did when I was 23, but taller. A 7-foot Cameroonian is the most relatable Philadelphia athlete of my lifetime.

"That's pretty good this time of year, isn't it?" pic.twitter.com/UGg93jRBKK

The middle-aged guy can’t help himself.

“Michael, the last time I was exposed to a peanut, I was itchy for three days, ok? I had to take baths constantly. I missed the O.J. verdict. I had to read about it in the paper like an idiot.”