The Case for Organizational Stability

This is a really good article, exploring how two different NBA teams dealt differently with trade demands, and where they stand now. Last summer, two of the best NBA teams had their second best player come to the team and demand a trade. One of those teams gave in, making almost no effort to repair the issues leading to the demand. The other team refused and addressed the player’s concerns. A look at where those teams and players are now is a fascinating look at how to handle an unhappy player.

The latter, the San Antonio Spurs, told LaMarcus Aldridge, “Nah.” Well, they told him they’d trade him if they could get a player like Kevin Durant in return. Which…lolololol. Instead, Aldridge and coach Greg Popovich met over dinner and wine a number of times. They discussed the issues. Popovich realized he was a big part of the problem – Aldridge has been in the league for a long time, playing at a high level, and Pop was trying to force his square peg into a round hole. Aldridge’s play is much improved this year, putting up the best numbers since his apex in Portland.

The former, the Cleveland Cavaliers, traded Kyrie Irving. Owner Dan Gilbert made no effort to change Irving’s mind, and traded him a short time later without ever talking to Irving again. Irving, finally out of LeBron’s shadow, is excelling in Boston. The Cavs are stuck in a roller coaster season. They just got Isaiah Thomas, the centerpiece of the return they received from the Celtics, back from a pre-existing injury. The team is having trouble integrating their new, ball-dominant point guard. It’s hard to imagine the team is not wishing they had a do-over.

This isn’t really surprising. The Spurs have been fantastic for decades, and continue to be very good even after Tim Duncan’s retirement. The Cavaliers, meanwhile, for years have been buoyed only by the greatest talent in NBA history, in spite of the terrible ownership and management around him. It’s good to be the King, but I have to imagine LeBron looks at what Irving is doing in Boston and is really frustrated. -TOB

PAL: Agreed – solid story. Having said that, Pop is respected and in charge. As the owner, Gilbert is in charge, but all decisions are made with only one consideration: LeBron James. It’s the only logical approach for the Cavs. He is truly a force unto himself, but here’s an instance where that might not be a good thing. 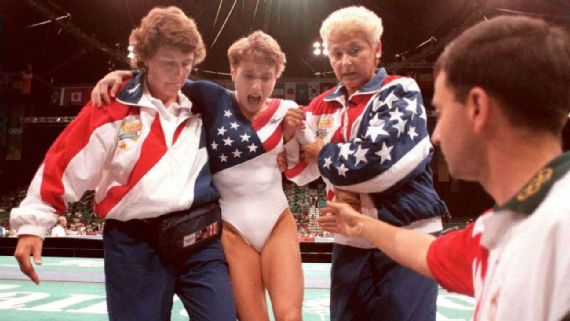 By now you’ve likely heard of Larry Nassar. He was the doctor who sexually abused hundreds young female gymnasts while serving as a physician at gymnastics clubs, Michigan State, and the Olympic team. He did all of this under the guise of medical treatment. It’s a disgusting, twisted, tragic story. A hard read, to be sure, but you really should read the link below.

As we learned with the Jerry Sandusky/Penn State and the Catholic church scandals, for atrocities like decades of sexual assault to take place there must also exist a culture of enablement. A different culture where the athletes/children’s wellbeing is first doesn’t change monsters like Sandusky or Nassar, but they certainly aren’t allowed to continue irrevocably damaging lives for decades.

Understanding how Nassar gained unfettered access to young girls and young women over the course of a quarter-century — despite repeated warning signs — means confronting an uncomfortable truth: He didn’t gain that access alone. Nassar was surrounded by a collection of adults who enabled his predatory behavior — a group that included coaches of club, collegiate and elite-level gymnasts, the USA Gymnastics organization, medical professionals, administrators and coaches at Michigan State University, and gymnasts’ parents, whom he groomed just as effectively as those he violated. Now that so much of the Nassar tragedy has been exposed, a lingering question remains: Were each of those enablers complicit or simply conned by a man described as a master manipulator?

As you will read in this story, the amount of times that girls and women had the courage to speak up about Nassar – truly believing doing so would put their gymnastic dreams at risk – only to be ignored or accused of outright lying is staggering. And then there are the women who were victim to his abuse at such a young age that they didn’t even know enough to know what he was doing was wrong.

Michigan State University allowed him to continue to treat athletes, and allow intravaginal treatments while under criminal investigation for sexual assault. “At least” 12 women have accused him of sexual assault during that time period.

USA Gymnastics also didn’t want to address the accusations around Nassar. The timing wasn’t good for them, as the Summer Games in Rio were fast-approaching. According to a mother of a gymnast who accused Nasser of abuse, the president of USAG, Steve Penny, called her and told her, “We need to keep this quiet.”

Gina Nichols says Penny repeated his initial request for discretion in several conversations over the ensuing months, requests that struck her, an operating room nurse, and her husband John, a physician, as odd. Penny, Gina Nichols says, put them in an impossible situation and “was in a position of authority over me and my husband. Our whole family gave up everything so we could put [Maggie] on this road.”

As medical professionals, the Nichols are both required by law to immediately report suspected child sex abuse to authorities, but, out of concern they would hurt their daughter’s future in the sport — and because they had been told Nassar had already been reported and any action on their part might jeopardize the investigation — they remained silent.

Sadly, parents like the Nichols played a role in enabling the abuse to continue. Many of them were friends with Nassar, and would drop their children off for treatments. It was a point of pride – their daughters were being treated by the physician treating Olympians. For some, they never knew what was going on, but others simply wouldn’t believe their daughters when they told their parents what was taking place.

Of all the terrible stories, this was the hardest one for me to read:

Stephens, whose father did not believe that she had been abused, says the fact she refused to apologize to Nassar was a constant subject in what had become a contentious relationship with her father. She says he branded her as a liar. Her father suffered from chronic debilitating physical pain throughout much of her life, and she says the cocktail of drugs he was prescribed to manage that affected his mental well-being.

A month before she left for college in 2010, she decided it was time to try again to tell her father that Nassar had assaulted her.

“I wasn’t lying,” she remembers telling him, before his hand shot out and pinned her neck to the chair where she was sitting. “Then he said — well, he growled, ‘What did you say?’ I gasped, ‘I wasn’t lying.’ He said it again. I was basically choking, and I said, ‘I. Was. Not. Lying.’ He just crumpled. You could see his face just completely shatter, like, ‘Holy shit, this 18-year-old doesn’t have any reason to stick to that story at this point.’ He just sat on the couch and just stared into space for a while.”

Again, this is a hard read, but it’s important for obvious reasons. It’s also a reminder of the kind of quality reporting can be done when enough attention is given to a story. – PAL

How Big of an Asterisk Do You Got?

This is one of those instances when I’m not sure what’s better: the story or the subtext. Fresh off the Minneapolis Miracle (see video below), the Minnesota Vikings are one single win against a backup QB away from being the first team to host the Super Bowl.

The usual rule with regards to ticket allocation is the following:

If the Vikings win against Philly, they would split that 5% with the AFC team, meaning both teams would have ~20% of the capacity seating. At US Bank Stadium, that breaks down to a little over 13K seats that season ticket holders, picked by random drawing (please), can have the opportunity to purchase for $950.

Nearly 40K of the 66,655 of the seats will be held for the sponsors and whatever the hell “auxiliary press” means. I knew sponsors get a good chunk of the tickets, but I didn’t know it was that high.

OK, so this story amounts to an interesting factoid, but the subtext here is fantastic. While the comments are pretty mellow, I can just feel Vikings fans gripping while reading this story. Do I mention the story to a friend? Does the mention of it jinx the entire thing? If I win the drawing do I go, or do I sell the tickets, and what does that say about my fandom? Life is about the experiences!…but 8K sure would help out right about now.

I promise you all of these scenarios are racing through every Minnesota fan’s mind.

By the way, the photo up top has nothing to do with this story. I had to share what appears to be the dumbest collection of tattoos this side of Arnoldisdead- (yes, that’s real). An NFL shield, the classic barbed wire, the Vikings head, “Freak” in with an old English font, and what appears to be a Cowboys star.  – PAL

This Is Not a Political Story

But it sure is funny. As you might know, Donald Trump’s doctor released a few details from his annual check-up. Among them, Trump is listed at 6’3, 237 pounds. As the article points out, Trump claims to be a great athlete: “I was always the best athlete, people don’t know that.” Totally, Don. Dan Gartland helpfully puts Trump’s stats into context, comparing him to professional athletes of similar proportion. A sampling:

That Trump, what a great athlete. h/t Michael Kapp -TOB

PAL: Love this. Humor me: what would your reaction be if a friend told you, “I was always the best athlete, people don’t know that.” I’ll answer on your behalf: You would scoff, then tell him to shut the hell up, and then never completely trust his opinion from that moment until the day you die.

This count as police brutality? pic.twitter.com/smEY7fyJ5p

I thought about getting a tattoo on my back as well at one point. I was thinking about getting ‘Back to the Future’. ‘Back’ because it’s on my back. And ‘Future’ because I’m the kinda guy who likes to look ahead, into the future. I just think a tattoo should mean something, you know? And it’s my second favorite movie.