Show them you’re human and can make mistakes, genius move by my boss #StarsTheyreJustLikeUs pic.twitter.com/IshKIqTlGv

The Best Kind of Sports Story 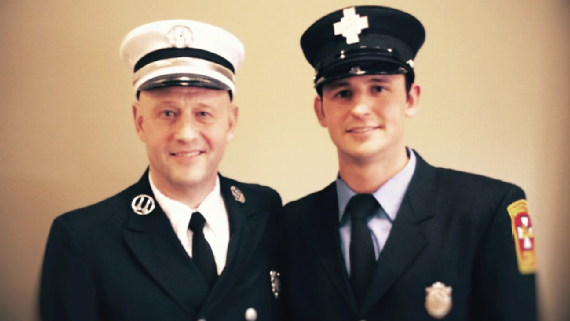 The Masters, which started Thursday, is one of those very few dream sporting events. When a kid plays, they imagine themselves being at the plate with the World Series on the line, throwing the Super Bowl winning touchdown, or putting for the green jacket. These are iconic venues and events that few regular folks ever attend, much less compete in, which is why I’ll be rooting for Matt Parziale.

Parziale is a 30 year-old firefighter from Brockton, Massachusetts. He works out of the same station his dad worked out of for 32 years as firefighter and captain. Parziale was a talented player growing up, but no Tiger Woods. As Ian O’Conner puts it:

Matt wasn’t a prodigy. He was a good hockey player and all-around athlete in a rugged working-class town known as the home of shoe factories and a pair of boxing champs who never backed down, Rocky Marciano and Marvin Hagler. Matt ended up at Southeastern, a non-scholarship member of the National Christian College Athletic Association, a group of small bible schools that didn’t exactly feature the level of golf Woods was accustomed to at Stanford.

After years of trying to qualify for the PGA Tour, Parziale figured it was time to fulfill his destiny: become a firefighter alongside his dad. He regained his amatuer golf status, and the odd firefighter hours allowed him to work on his golf game. His breakthrough came this year as he won the Mid-Am (tournament for post-college golfers to try to qualify for The Masters & U.S. Open) with his dad on his bag (his dad will be Parziale’s caddy for The Masters, too).

Parziale knew the implications of the win, and told his fiancee that they needed to move the wedding date.

Matt waited and waited on the first tee for Woods to show up for their early Wednesday afternoon nine, looking like a boy worried that Santa Claus might not show. Suddenly, word rippled through the crowd that Tiger was heading to the nearby putting green, and off Matt and Vic marched to join him.

Woods greeted his newfound friend warmly. They chatted, took some practice putts, and then headed together to the first tee along with the third member of their group, Fred Couples, as fans shouted at them from both sides of the roped-off lane.

Parziale was first to put his tee in the ground. He lashed into his drive before two fans who had been poking fun at the sight of Matt waiting on Tiger earlier on.

“Who was that guy?” one asked.

The other replied: “He’s a guy who’s been waiting his entire life to hit that shot.”

Tiger and the firefighter walked off the tee box and down the fairway talking and laughing as if they were lifelong buds, a scene that kept repeating itself across the front nine.

This is a feel-good story that somehow doesn’t read like nacho cheese sentimentality. Enjoy! – PAL

God Damnit, I Knew Ohtani Would Be Good

Shohei Ohtani was the talk of last offseason’s Hot Stove. For one, the new international signing limits meant no one could simply bowl him over with tens of millions of dollars, leaving everyone on equal ground. For two, Ohtani came over expecting to both pitch and hit. Logically, an AL team made sense for him – he could pitch on his start days, and then DH on other days. The book on him was that he was a frontline pitcher, but that his bat was a bit behind. The Giants were finalists for him, and there was a week there where it seemed the Giants might get both Ohtani and Giancarlo Stanton (they did not).

Ohtani’s two-way status makes him more intriguing than any MLB player debut in recent memory, and with the Giants’ near miss, I was especially incentivized to keep an eye on him this Spring. He did NOT do well. At the plate, he went just 4-for-32 (.125 BA), with no extra-base hits, and 10 strikeouts. On the bump, it was a small sample size, but he gave 8 runs, including 3 home runs, in just 2 ⅔ innings of work. Yikes. I was hopeful that the Giants missing out on him was a blessing in disguise.

Nope. Ohtani began his regular season career by pitching very well on Sunday in Oakland, touching up to 100 mph with his fastball, and getting 18 swings and misses, many with his splitter. He struck out 6 over 6 innings, giving up 3 runs, all on one swing. He followed that on Tuesday, playing DH, with a no doubter 3-run bomb in his first at bat. He hit another home run on Wednesday, a 400-foot shot to dead center off Corey Kluber, one of the best pitchers in the game.

He’s now hitting .429 with an OPS of 1.286. That’s real good. And numbers aside, he certainly looks like he belongs, and is hitting the ball very hard. I guess his bat isn’t behind, and I am once again very angry that he did not choose the Giants. -TOB

PAL: And Joe Panik is on pace to break the single season home run record. Ohtani has 14 at bats and 1 start as of Thursday afternoon. I’m pulling for him, but let’s all just take it easy.

This is an interesting interview with MLB commissioner Rob Manfred. MLB has been making negative headlines lately for how much it pays minor leaguers. Here’s what minor leaguers are paid:

Note, that’s what they are paid each month during the season. In the offseason, they aren’t paid. Manfred ties himself into knots trying to justify both the low pay and the fact players aren’t paid year round. He doesn’t address the fact that minor leaguers are not paid at all during Spring Training. As the interviewer notes: “If you’re required by your employer to do something — anything, really—that is optional in name only, and not doing it will cost you your job, that constitutes working.”

The kicker comes at the end. The cost to each MLB team to pay all minor leaguers $40,000 per year would be just over $6M per team, per year. They throw $6M at the bottom of the barrel major leaguers. They can afford this! Pathetic, Manfred. -TOB

PAL: “To be fair, there are also bonuses. The top 64 picks last year all received a bonus of over $1,000,000 before taxes,4 but roughly 40% of players signed for one-time bonuses of $10,000 or less. The subsequent contracts can keep them in the minor leagues for as long as seven seasons with no way to leave for a higher bidder.”

It’s the last part of this that’s b.s. – a player’s rights are controlled for 7 years! That’s just absurd, especially considering the disparity of league minimum for big league players is $507K. If one team thinks a guy is a big leaguer and the team that hold the player’s rights isn’t quite sure, then that’s a potential difference of over $490,000!

Sergio Garcia ends his Masters on Day 1: with FIVE shots into the drink on 15.

PAL’s Song of the Week: Willie Nelson – “Me And Paul”

“Every day is black tie optional.”