The hero the NBA deserves, but not the one it needs right now.

The weather for this year’s Boston Marathon was downright miserable, which allowed relatively average runners to have unforgettable days: Of the top 15 women finishers, 9 of them weren’t even ranked in the top 25 runners leading into race. This means that many of the women at the top of the results are “regulars” – they have full-time jobs like you and me. They did their training by themselves or in running clubs, and then they went out and beat some of the greatest distance runners on the planet. Sara Sellers (pictured above) had only run one marathon before finishing second at Boston. Hell, earlier that week she and her brother went up to Acadia National Park to ride bikes. 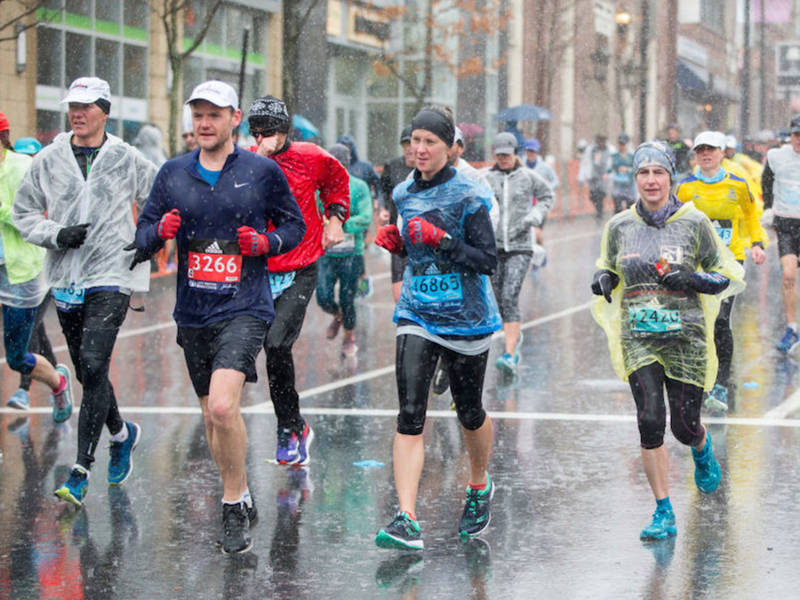 While what Sellers did was downright incredible, consider a couple facts:

Still, her old college coach who put together a training plan for her couldn’t believe what he was seeing online.

Her Utah-based coach, Paul Pilkington, who was watching on television, had to hit refresh on his computer to make sure the results were correct. In a telephone interview, Pilkington said he knew Sellers to be “very gritty and tough in adverse conditions.” And yet, “I never thought she’d get second,” he said.

Malika Andrews and Matthew Futterman of The New York Times do a really nice job in this story capturing what’s special about sports or competitions in which us regulars are on the field/course/pitch with the greatest in the world. On the spectrum of elite runners and weekend warriors, they make it feel like Sellers is “one of us”. She’s the nurse anesthetist who trained before and after work, and then she’s finishing second in perhaps the most iconic marathons. While that’s the case in terms of training regimes and a lack of sponsors, Sellers splits reveal a talented runner finding her marathon stride at the perfect time.  – PAL

Source: “The Nurse Who Took a Very Different Route to Second Place in the Boston Marathon”, Malika Andrews and Matthew Fetterman, The New York Times (04/17/2018)

TOB: This is pretty incredible. I tried to think of a major-sports comparison. It took me a few minutes, but I got it: Kurt Warner, who went undrafted out of college and worked as a grocery bagger when he couldn’t catch on with an NFL team. It wasn’t until five years later that he got to the NFL and led the Rams to the Super Bowl. Similarly, while an amateur, Sellers was not some chump off the street. She was a very good, but not great, distance runner in college. She didn’t have some out of body, inexplicable performance here, either. She finished the one, (yes one) previous marathon she ran, last September, with a nearly identical time she ran in this race – 2:44:27 and 2:44:04. Unlike everyone else, she just ran her best race, and ignored the weather. Pretty cool. It’d be interesting to see what she could do if he dedicated her time to it.

Was LeBron Acting When He Received Sad News? Or Is He Covering for the Reporter?

During Wednesday’s game between the Cavs and Pacers, news began circulating that Erin Popovich, the wife of Spurs coach Gregg Popovich, had passed away. Erin Popovich’s death came, reportedly, after a long illness that the Popovich family had not publicly disclosed. Obviously, this was and is sad news. Popovich, in particular, is a beloved NBA figure, and many players, coaches, media persons, and fans sent along their condolences upon hearing the news. Kevin Durant was informed of her death and asked about it after the team’s shootaround in San Antonio ahead of Thursday’s Game 3 against the Spurs. His reaction was, appropriately, one of shock and sadness for a person he admires.

Similarly, following the Cavs’ Game 2 win, a game in which LeBron carried his team to a close victory despite his herculean effort, TNT’s Allie LaForce informed LeBron of Erin Popovich’s death during her on-court post-game interview of LeBron. LeBron’s reaction is also one of shock and sadness, and it was an emotional moment of television. I watched it live, and found it so affecting I rewound it to watch it again.

Other viewers, however, found the question to be in poor taste, and LaForce began to take a lot of heat online for the question. Some thought LaForce should not have put LeBron on the spot like that, on live TV, and asked him about such a sensitive subject without warning. I don’t agree, but I can understand the argument that perhaps she should have let him know ahead of time. Of course, things then got even weirder.

LeBron defended LaForce, saying that in fact LaForce told LeBron, off camera prior to the interview, of Erin Popovich’s passing, and clearing the question with him ahead of time. That begs the question, though: Was LeBron’s reaction all an act?

I don’t think so. Watch it again. That doesn’t seem like acting to me. That seems like genuine emotion, shock quickly turning into sadness. If LeBron is telling the truth now, then his reaction is a little odd – there was no need to sound shocked. And if LeBron is telling the truth now, LaForce should have prefaced her question by saying, “As we discussed moments ago….”

No, I think LeBron is covering for LaForce, trying to quash a controversy that shouldn’t have existed, and trying to keep the focus on the Popovich family, not on whether a reporter properly asked LeBron a question about it. As I said, I can understand thinking LaForce should have cleared the question with LeBron first, but I don’t understand getting bent out of shape about it, and turning what should be a sad story into an Internet Outrage Story. -TOB

PAL: Why couldn’t LeBron just tell the truth? She obviously didn’t clear it with him beforehand, but it’s OK. It’s OK because that’s how important LeBron is to the NBA. He’s not just the face of the league, but one of the very few people that can speak on behalf of the league and/or it’s players.

Let’s Not Forget How Great Albert Pujols Was

Short list, eh (also, I’m already forgetting how insanely good Rodriguez numbers are)? No Bonds (just missed on RBI), no Ruth (hits), no Mays (RBI). Maybe it’s just me, but it feels like we’ve been overlooking Pujols as he finishes up his career with the irrelevant Angels. In his prime, there was no other hitter I feared more than Pujols, and that includes Bonds (because they’d never pitch to Bonds).

Jerry Crasnick does a nice job showing us what makes one of the greatest hitters ever tick, and he highlights the reverence other players have for Pujols.

And then there’s how he performed against (some) of the best pitchers (also, WHAT is Ben Sheets doing on this list?):

The story loses me a bit at the end when it expands beyond his accomplishments within the batter’s box, and – quite frankly, it all starts to sound a little like “Cardinals’ Way” propaganda when he starts talking about the stats that matter to him (spoiler alert, Pujols doesn’t like “computers” telling him about baseball). Still, worth the read. – PAL

TOB: I’ve never been a big Pujols fan. He seems boring? And it annoyed me in that 2001-2004 range, when people argued (unsuccessfully) that he should win the MVP over Bonds, when Bonds was putting up some of the very best seasons of all time.

And as Phil alludes to, Pujols is anti-modern stats. WHY? First, those stats will place the first dozen years of his career into rarified air. Second, why do so many people, like Pujols, not understand the argument against the RBI? Yes, of course, you score by hitting your teammates (or yourself) in. But the point is simple: why is a single more important than an identical single when the first one just happened to have a teammate or two in scoring position, but the second had no one on base? The hitter had nothing to do with that. It’s chance. It doesn’t mean RBIs aren’t important, it’s just a little random. If you look at his stats, his RBIs predictably drop along with his batting average and slugging. But there are two recent seasons that really illustrate this.