Wrigley Field in Los Angeles. On April 27, 1961 the expansion Angels lost its first ever game to the Minnesota Twins, 4-2. 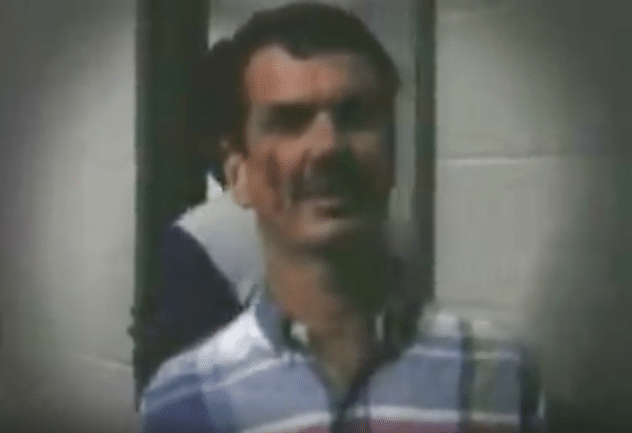 Most of us who follow sports – that is to say, all of us, because I’m writing a sports blog and you are reading a sports blog – have seen the video of manager Hal McRae’s tantrum following a Royals loss to the Tigers 25 years ago this week. McRae is surrounded in his office by local reporters when this happens:

Or, as The Athletic’s Rustin Dodd puts it:

In one version of the story, it was a tape recorder. In another, a sharp piece of office supplies. For years, nobody could say for sure. They watched the famous video tape, and they listened to the F-bombs. They replayed it slowly, frame by frame, like a managerial Zapruder film. The sports writers still weren’t sure, even Alan Eskew, the baseball beat man who took the foreign object to the face.

This much, we know: The flying object left a bloody, 1 1/2-inch gash on Eskew’s right cheek. It required a trip to the trainer’s room and a tetanus shot. It is, a quarter-century later, the most famous media injury in the history of the Royals, the bloody symbol of a wild managerial tirade. And 25 years later, Eskew is almost certain: It was probably an ashtray.

Thanks to Sunflower Cable out of Lawrence, Kansas, there is video of the tirade. They didn’t know what they had, and when other local affiliates called and asked for the footage, Sunflower simply handed over the footage to anyone without even putting their watermark on it!

As most of us know now, the clip went viral before “viral” was even a thing. Local and national outlets played it. ESPN had a field day with it. Eskew, known simply as “Scoop”, was asked to be a guest on radio and TV, but that wasn’t his style. His job was to cover the beat for the Royals, and so he and McRae meet face-to-face and settled up.

“McRae offered a short apology, and Scoop accepted, delivering just one request: Crab cakes during the next trip to Baltimore.”

I mean, how great is that?

Hal McRae was not that dude on this video. Players and every reporter describe him as cool, calm, blue collar. The reporters enjoyed covering his team’s beat. Players liked playing for him.

“The image he had around the rest of the country then was he was this maniac,” said Flanagan, who now covers the team for MLB.com. “And he wasn’t. He was just a cool, cool manager. He was funny. His cackle was the best cackle I’ve ever heard. He’d rather laugh than do anything.”

Covering a baseball beat in the 80s and 90s sounds like so much fun, and the guys like “Scoop” that have done it for so long (he still covers the Royals) are a part of the culture around a team. He’s part of that team’s story, because he’s been penning it for so long.

And then there’s this last nugget that had me laughing:

McRae would receive just one more chance to manage, a hopeless situation in Tampa Bay in 2001 and 2002. But one day in 2001, he returned to Kauffman Stadium for a road series. In the hours before the first game, McRae sat at his office desk for a pregame media session. One reporter appeared in the back, wearing a catcher’s mask. It was Scoop.

Another great read from The Athletic. The link below will likely direct you to a free trial offer. I think it’s worth a few bucks a month to read solid sports reporting and feature writing without no ads.

By the way, If I ever write a young adult novel about a baseball, the reporter character in the story will no doubt be named “Scoop”. – PAL

Should a Balked Run Count As An Earned Run?

For the first time in a long time, this was an article that had me hooked with the headline – “A Dumb, Specific Argument About Balks”. Boom – all-in. Perhaps a rant about headline writing in the digital age (or lack thereof) is in my near future.

Back to balks. From Little League on, balks are a part of baseball. Having played and watched baseball for over 30 years, I can’t confidently tell you what is and isn’t a balk. A balk is an intentional or unintentional act to mislead the baserunner. That’s my best, most vague attempt at defining a balk. Good enough, I guess, but I’d never feel confident enough with my knowledge of the rule to call one as an umpire in a game.

I am not alone. Per Emma Baccelieri from Deadspin, the MLB definition of a balk in its glossary is different from the definition in the rulebook (how the hell could that be!?!):

“The rule is in place to prevent a pitcher from deceiving the baserunners,” the glossary reads, while the rulebook doesn’t get close to such an idea. There’s nothing about the intent or the result of the motion like that in the Official Baseball Rules, just a technical description, and one that can end up remarkably tricky to apply, at that.

Take a look at the gif above. It is a balk – with runners on first and third – but is this a deception in any way? That runner on third was granted home, and the runner on first advanced to second. Which brings us to the heart of the manner: should balked in runs count as earned runs against the pitcher’s stat line?

It’s not as simple of a “of course it should count against a pitcher’s E.R.A.” as you might think. Baccellieri writes:

‘But the pitcher’s clearly responsible for the balk; he should be responsible for the run that it causes!’ you might say. Okay, yes, but—he can be clearly responsible for an error, and yet he’s not considered responsible for the run that the error causes! And you might then say that the error is related to the pitcher’s defense, which is a separate matter, while the balk relates only to his pitching proper. But does it? The whole idea of the balk is that he’s not really pitching, not near any point of completion. (If he was, it’d just be a pitch!) In Bettis’s case here, and many others, the whole thing’s really just an error—in the literal sense of the word, not the baseball sense. So why draw the line here? Why determine that a pitcher’s fielding error is exempt, and this technical error is not? On a call that is so often made or missed in error itself? Baseball grants a pitcher a little bit of mercy here; the scorecard will not ignore an error from him, but it won’t use it to statistically penalize him in the measures where it’d hurt him most. Why shouldn’t a balk be scored in the same way? There’s no reasonable consistency to any logic that treats them differently.

Here’s a real simple solution: a run scored as a result of a pitcher error, in the “literal sense of the word”(error or balk), should count as earned. Seems like solid logic to me…but wait. What if a pitcher commits an error that allows a baserunner, but then that base runner scores when the second baseman boots a grounder in a later at bat? I still think it’s an earned run, as the scoring runner is on base due to the pitcher’s fielding error, while hitter on the ground ball would be an unearned run, as he/she is on base due to error at 2B…right?

Do you see where we are? We’re in the bowels of baseball nerdery that no one but for a few of us care about. Readers – tell us what you think. How do you count a run from a pitchers balk: earned or unearned? Baseball minutiae perfect fodder for a Friday debate. – PAL

TOB: I have umped quite a bit in my life and I have no idea what is and isn’t a balk, aside from the most obvious starts and stops. But the other night I was watching a Giants/Nationals game, and the Nationals reliever kept sorta lifting his front leg, without it leaving the ground, repeatedly before he began his windup. I’ve seen far less significant twitches than that called a balk. I don’t recall if there was a runner on base, but he was pitching from the stretch so it seems likely. And if there wasn’t, and that’s his normal pitching routine, he has to get called for a balk, doesn’t he?

As for earned runs for pitchers on errors: it’s really odd. Let me paint a scenario. A runner gets on because the pitcher commits an error (come-backer, overthrows first. Let’s call the pitcher “Jon Lester”). Then, the next batter hits a ground ball to second. The second baseman tries to hurry to turn the double play, and throws it away. Next batter hits a triple. Both of those runs are “unearned” for the pitcher – but they both got on base because of his throwing error.

A few weeks back we wrote about the measly pay given to minor league baseball players. I read another good article about it this week, where the following point is made:

Every team could pay its minor leaguers $30,000 a year for about $4.5 million, or the cost of a decent free agent reliever. Instead, the league got together and spent $1.3 million a year on lobbying in 2016 and 2017, and made the problem go away forever, or at least until Congress becomes aggressively pro-labor, which might be effectively the same thing.

$4.5 million? They’re making money hand-over-fist. That is chump change! Hell, Forbes estimates the Sacramento Rivercats, the Giants AAA-affiliate, generate $20 million in annual  revenue. The team has 38 players on its current roster, and to pay them each $30,000 per year would cost $1,140,000 – only 5.7% of its revenue.

me ordering a round of milks for the fellas pic.twitter.com/KP8IIDm5jy

I was sad at first, but then I remembered that Bob Marley song: “No, woman! No cry!”