Baseball is over. Football – college or NFL – doesn’t really matter yet. NBA, NHL, and college basketball are just getting started. All of that is more than enough reason to share a fun history lesson as to why the hell the Oakland A’s have an elephant for its mascot. It all started in 1902 with with an insult from New York Giants manager John McGraw. There’s some history as to why McGraw had a problem with any American League team at the time, and when asked what he thought about the upstart league, he said, among other things, the following:

The policy of the American League is everything for Boston, Chicago and Philadelphia,” he said. “The remainder of the teams in the organization take what they can get. I’m not saying this because of any prejudice, but because I was told so point-blank by the president of the American League.

The American League is badly in debt. If Johnson wants to deny that, I will tell how much it is in debt and where the money is owed.

The Philadelphia club is not making any money,” the future Hall of Fame manager continued. “It has a big white elephant on its hands … no money was made last year and no money will be made this year. 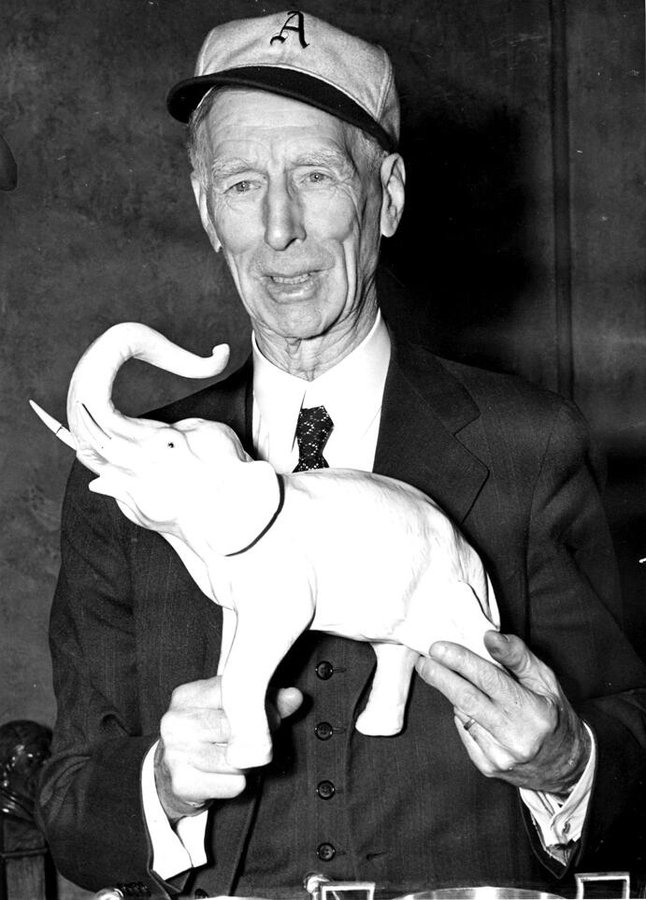 Philadelphia was home to the Athletics at the time. Connie Mack (the manager who wore a suit, not a jersey) was at the helm of the A’s at the time. He was a polite guy (obviously…the dude wore a suit while managing a baseball team), and didn’t give too much to the press, but even he had to respond to McGraw’s quote.

“McGraw says that the Athletic club is a white elephant. I will bet McGraw $1,000, and I think that I can get the coin, that the Athletics did make money last year and are making money this year.”

He added in 1952, in an interview with the Palm Beach Post: “When I heard about it I said, ‘We accept McGraw’s name of White Elephants,’ and we have kept that title ever since.”

It was a bold statement — one that easily could’ve backfired — but Mack’s team, which featured future Hall of Famers Eddie Plank and Rube Waddell, backed its skipper’s words. The A’s finished first in the American League, with a record of 83-53-1, and won the pennant (there was no World Series that year).

And so, over the next 115+ years (on and off) the elephant has been synonymous with the Athletics, be it in Philadelphia, Kansas City, or Oakland. A mascot born out of a beef.

As a small tangent – and don’t take this, Ryan Nett – I have an idea. If I ever coach high school varsity level baseball or higher, I will wear a suit and tie. It’ll create a little buzz, get the local paper down to do a story on the high school team, and then we’re moving. The uniform on the coach is truly a terrible, terrible look. There’s precedent in not wearing one, one that the silverheads will appreciate the hat tip to Mack. Win-win.

Tangent aside, this is a really fun article about a legit interesting history of a mascot. Good stuff! – PAL

Source: “How the A’s elephant is rooted in an age-old rivalry, and why it has endured for over a century”, Alex Coffey, The Athletic (11/14/19)

A JV baseball coach in New Jersey instructed a player to slide into third base. The player wrecked his ankle. The family sued the school district for not properly training the young coach. The facts of the case are every bit as ridiculous as you’re imagining right now, and 2,625 days have passed since the slide and the docket being resolved. The coach and the school district were not found liable or reckless.

This is one of those ‘how have we gotten here’ stories, and it’s written with a little too much sanctimony for my taste, but it’s an interesting story nonetheless.

So, yes, I have found the intersection of our overly litigious society and our out-of-control youth sports culture. As Suk sits there, scribbling away, I am consumed with a sickening thought: If this JV baseball coach is found liable for telling a player to slide, there’s nothing to stop the dominoes from falling everywhere around us.

The full story is worth a read, and I will concede that – while this remains clear that a coach can’t be held responsible for when a kid gets hurt sliding – there are some details that allow me to feel a bit of sympathy for player.

For one, it sounds like his ankle is permanently jacked up.

Baseball was the least of his worries. Even after three surgeries, the ankle was not improving — one doctor even presented amputation as a possible outcome. A specialist from the Hospital for Special Surgery in Manhattan, Robert Rozbruch, found post-traumatic arthritis and signs of necrosis — evidence the bone was dying.

Mesar needed two more surgeries, including one to inject stem cells into the ankle tissue, and he was fit with an external fixator, a stabilizing frame to keep the bones properly positioned. The injury improved, but Rozbruch told the once-active teenager to avoid high-impact activities. Even jogging.

John Suk, the coach, also never attended any coaching seminars, which I thought was mandatory in order to coach at the high school level.

Of course, neither of those two details – how messed the ankle was, and the lack of coaching seminars – make Suk or the school district reckless, but I think in some of these seemingly absurd lawsuits aren’t so absurd when you dig into the details a bit. I am reminded of the McDonald’s hot coffee lawsuit (if you haven’t, then you must watch the doc Hot Coffee).

On a lighter note, it’s hilarious how the poor quality of the opposing team from the game if the injury is ridiculed. Here’s an exchange from the plaintiff’s attorney cross-examining Suk:

“Sir, my opinion of their team has no bearing —” Suk answers.

Give the full story a read, and let us know what you think, especially you coaches out there. – PAL

I Hope You Enjoyed This Week, Gophers Fans

Regular followers may have noticed I, a son of Minnesota, poked a little fun at the Gophers football team last week. I laughed at the very notion of the Gophers beating #3 Penn State. Well, the Gophers pulled off an upset, breathing even more life into P.J. Fleck’s con job.

Mark my words, because I’m doubling-down: the Gophers will not only lose to Iowa, but they will get their shit handed to them by Wisconsin, too, and not participate in the Big 10 title game.

Why am I going after the school of my dad, uncle, cousin, and niece, you might ask?

Here’s a lil sampling from Philip’s interview on the Dan Patrick Show this week:

And then this cringe-worthy, made-for-tv speech:

All of this is an extremely long lede into the actual story I’m posting about Gopher fans getting down to Iowa City for this Hawkeyes game. For one, it’s the laziest kind of sports writing (I emailed a bunch of folks, and here’s a collection of their responses). Also, the idea of the Gophers in the Rose Bowl is unironically brought up in this article. Drugs, watch out for them.

Talk about a jinx article:

But this season, he said, the Gophers have become “appointment TV,” and their potential for playing in big games later in the year has him checking travel and ticket sites often. He even mentioned the “R” word.

“I’m a football fan, but I’m not traveling to Indianapolis just to see the BIG Title Game of Ohio State, Penn State or a Michigan school take on the West winner. With the Gophers in contention, I am looking into tickets to the game,” Tate said. “I’m also looking at the costs of a trip to Pasadena for the Rose Bowl. It’s the one stadium and the one game I’ve always wanted to go to.”

It’s just football, and P.J. Fleck has a national audience right now with the undefeated Gophers, and – what the hell, it’s entertaining, right? Maybe I should give him a break. Maybe, but this guy’s just a little too loud, laying it on a lot too thick. He’s like a bad actor playing a coach on TV. He’s no Coach Taylor, but, man, is he trying so hard to be the real life version of him.

I see 2 loses on that schedule, my friends. P.J. Fleck will not be the head coach the Gophers 14 months from today, new contract be damned. – PAL

Song of the Week: Kendrick Lamar – “I”