The Sign-Stealing Scandal: The Bigger Picture

Much has been written about the sign-stealing scandal in baseball that, so far, has led to year-long suspension for Astros GM and the team’s manager, the “it was mutual” parting of ways between the Red Sox at its manager, Alex Cora, and the Mets asking for a do-over with Carlos Beltran before he ever managed a game with the team. I found Michael Bauman’s article on the subject the most thought-provoking.

By punishing the general managers and managers (but not players, unless you count Carlos Beltran as a player in this instance), MLB and its teams are getting rid of the story, but not the problem.

These investigations, and the punishments they’ve inspired, are attempts to fix a problem. If the problem is “the 2017-18 Astros and 2018 Red Sox were using cameras to steal signs,” then consider that problem all but fixed. The principal offenders in the sign-stealing scandal have now been identified and sanctioned.

But what if the problem is that MLB teams are using technology to gain an unfair advantage during gameplay?

While reading this, I couldn’t help but think of my Twins, owners of the new single-season home run record.  Let’s just be very clear: the Twinkies haven’t been mentioned once in any of these stories. The record is legit!…and so is the team’s 16-game playoff losing streak.

Tangent complete. Back to Baumann:

It’s also reasonable to conclude that sign stealing isn’t the problem, but rather merely a symptom of baseball teams’ overreliance on technology. The mere existence of the replay room, which the Red Sox allegedly used to relay signs to hitters, is another example. The manager’s challenge is a pointless complication of replay review anyway, but allowing the manager to wait for a verdict from his own video staff before challenging a call is like giving students the answer to a test beforehand—if a call was so egregiously blown that it needs to be overturned, it should be obvious to the naked eye. But MLB clubs, unwilling to walk the tightrope of replay without a net, have turned around and used those nets to ensnare unwitting opponents.

Amen, man. If we can’t completely remove instant replay from the game, can we at least bypass this completely absurd dance of having teams decide whether or not they want to challenge a call? Get rid of the team challenge, and then we can get rid of these video replay rooms. Clear solution to the immediate problem.

Bigger picture: baseball’s obsession with technology in a stat-obsessed sport makes for a powerful duo, and not always for the better. It removes “human considerations” as Bauman puts it. And while some will roll their eyes at those crusty old dude bemoaning how technology takes out the “human element”, Baumann convinces me there’s something much more important playing out here.

Electronic sign stealing is the cause célèbre of the day, but it’s penny-ante shit compared to other behaviors that stem from the same societal disease that views rules, norms, and human beings as obstacles to be navigated around or run over on the way to the goal.

Source: “The Treatment for Sign Stealing Isn’t a Cure for MLB’s Disease”, Michael Baumann, The Ringer (01/14/20)

TOB: As I wrote back in November, I didn’t care too much about this scandal, until I heard the trash can banging videos. It was so blatant, and so disturbing as a competitor. You might as well throw BP up there. But there’s also a side of me that friggin loves the drama. It’s…kinda hilarious. The stupidity of it all is just so funny.  On Thursday, as Twitter went wild with accusations of Astos players wearing buzzers during the 2019 playoffs, my co-worker Kevin and I were howling in our offices, sending each other tweets and videos and breaking down video frame by frame. Cheating is bad, yes. But drama is great.

And after such a wild day, I have so many questions and thoughts.

If you’re like me and want to revel in more of this absurdity, SI’s Emma Baccellieri did a wonderful job recapping it all here. I’ll leave you with what might be my very favorite:

The Most Important 30 Seconds of Burrow’s Season 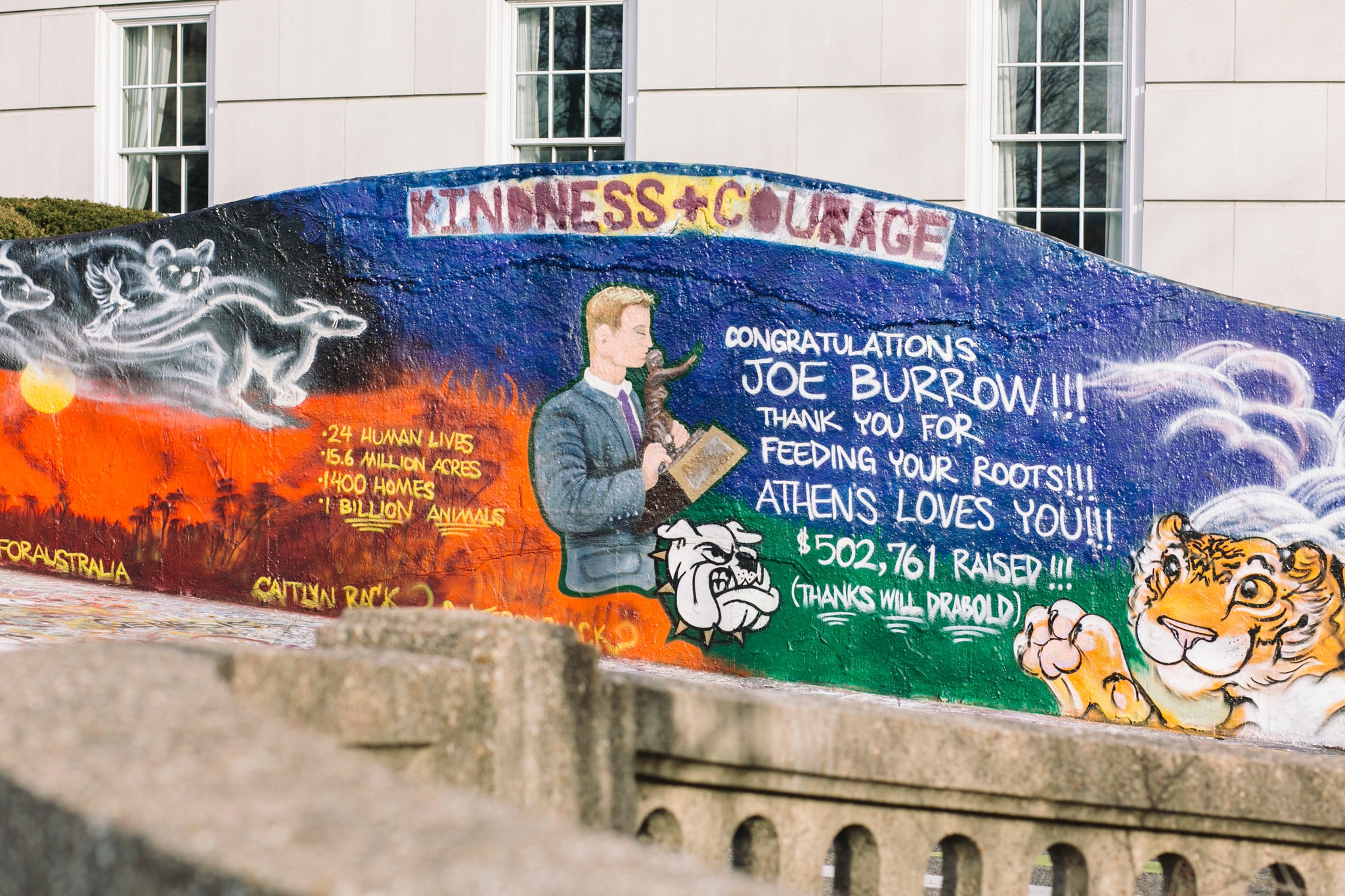 By now you likely recognize the name Joe Burrow. He was the LSU QB who carved up Clemson to the tune of 463 passing yards, 5 TD passes, and nearly 60 yards rushing. In the process, he capped one of the greatest college football seasons: he lead his team to an undefeated national championship, threw for 60 touchdowns, and had a completion percentage over 76%. LSU smoked Alabama, Georgia, Oklahoma, and Clemson. It should come as no surprise that Burrow was the runaway Heisman winner.

The moment when all of your dreams are realized. 🏆

Perhaps one of the most impressive performances from his year didn’t happen on the field. During his Heisman acceptance speech, Burrow made it a point to use that stage and platform of ESPN broadcast to speak to the kids in Athens, Ohio. Specifically, he spoke to kids in his hometown.

Coming from Southeast Ohio, it’s a very impoverished area, and the poverty rate is almost two times the national average. There are so many people there that don’t have a lot, and I’m up for all those kids in Athens and Athens County that go home to not a lot of food on the table. Hungry after school. You guys can be up here, too.

As Billy Witz of The New York Times details in his story, a lot went into those thirty seconds of Burrow’s speech, and perhaps even more came out of it. While Burrow wasn’t one of the kids living in the trailers (his dad is a recently retired college football coach, and his mom is a principal), he wasn’t oblivious to the socioeconomic makeup of Athens. His mom sees it every day at the elementary school.

Her office is bright and cheery, a welcoming place for “kiddos,” as she calls them, from kindergarten through fourth grade. The office is dotted with photos of her husband, Jimmy, and Joe; there is a bookcase filled with stuffed animal tigers and teddy bears, bracelets and candles; and the accent colors are purple and gold.

Below her desk is a box of macaroni-and-cheese dinners.

How often does she give them out?

The poverty rate at the school — or those eligible for free or reduced lunch — is 36 percent. Every other Friday, bags of food are sent home with 100 children, about 20 percent of the school’s enrollment. One of Robin Burrow’s biggest concerns is what happens during the two weeks that schools are closed over winter break.

Burrow’s words connected with a lot of people from the area. Will Drabold, who graduated a few years ahead of Burrow, described hearing the speech as “being struck by lightning”.

The next morning, Drabold was determined to do something: He put up a Facebook page asking for donations to the Athens County Food Pantry. The goal was $1,000, which he started with a $50 pledge.

That’s real money leading to real food, feeding really hungry people. Reading Witz story is a great, positive reminder why athletes should not stick to sports. The full story is well worth the read- PAL

TOB: Burrow seems like a good dude, and I’ll say this: I don’t remember the last time I watched a college football game and said, “Oh my god, what a throw,” or some variant thereof, as many times as I did on Monday watching him light up a very good Clemson defense.

A little boy playing fetch with the next door neighbor’s dog is all I need today.pic.twitter.com/SJeSq3fMUu

Yesterday a CFB coaches agent called me. All he said was "LSU hired Ed Orgeron." We laughed for a few minutes.

Everything You Need To Know About The Current State Of Major League Baseball As Told By Mean Girls pic.twitter.com/2HrKoY0yJc

I’ve made some empty promises in my life, but hands down, that was the most generous.