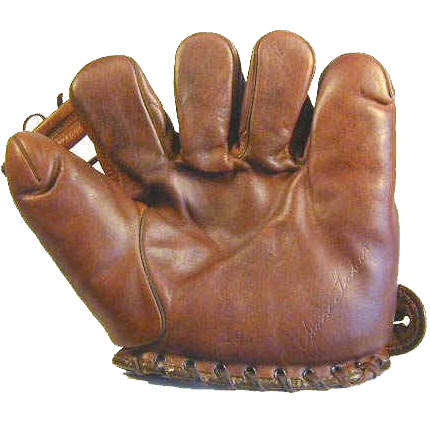 This text from my college roommate, Ryan Nett (LHP, so…you know…take it with a grain of salt) got me thinking:

About the glove topic. Is there anything more personal and more sacred than getting a glove in sports? If you’re a freshman in HS, really that is likely your forever glove. Or for instance, I got mine freshman year of college – that’s my forever glove. I bought a new one last year, wore it sparingly, wasn’t the same. Went back to the old one. Just different than shoes or cleats, even a hat. Think about the idea that most of us that love our baseball gloves, that we put time into selecting it, breaking it in, will have it longer than we are married. Still will cringe when others grab it, put their hands in it, or throw it to the side.

I agree with Netter; the selection of a glove, the care you give it, and the relatively long length of time you go onto the field with a glove makes it perhaps the most important and personal piece of sporting equipment. Most people can get on board with the emotional connection to a glove, but not as many people know (or are comfortable enforcing) the glove rules.

So I put a really nice glove on our wedding registry and my brother was nice enough to come through on that front. There was a picnic in Golden Gate Park, and I brought my new glove. It was a big group there and while I was eager to show it off, geeked to start breaking it in, I was absolutely hesitant. The park picnic was the wrong environment. Within an hour, the group had broken up – some were hanging with the babies near the blanket, while others played pepper. Gloves were freely exchanged between hitters and fielders.

It wasn’t long before I was hitting and someone was shoving there Dorito-dust hands all the way up my new glove. When I lost my turn at bat and moved to the back of the half-circle around the batter, I asked the guy on the other side to switch gloves with me so I could get my glove back. Within minutes, I had to remove myself (and my glove) from the game. I couldn’t put it through that. I couldn’t have the first real action for the glove to be so haphazard, so compromised.

So, here are the Glove Rules:

The wedding present. Notice how little of the hands is actually in the glove. When wearing someone else’s glove (after enthusiastic permission is given), your hand really shouldn’t go much further in the glove than this.

TOB: Agree with all of that. I would freak out if someone put their Dorito covered hands in my glove.

Speaking of not putting your name/contact info, I once had a lost glove miraculously return to me. It’s a glove I’ve had since probably high school. I stupidly left it in the dugout after a softball game about ten years ago. I was so mad. I went back, but it was gone. I e-mailed the head of the league, and never heard back. I bought a new one, and it took some time to break in, but after a few months it was finally up to snuff.

9 months later (and I know because I found the emails about it), I was on the softball league’s website, I believe hoping to pick up a player looking for a team. I saw a post on the message board, around the time I lost my glove, about a found glove. No picture, no description. So I e-mailed the guy. He said he still had it! He brought it to the field the next week, and I was reunited with my glove. Truly, this is a guy who understands the rules of a baseball glove. Thanks, Anthony Collodora, for taking care of my glove.

Funny enough, when I got it back, I stuck with the new one. For one, the old one was a baseball glove, while the new one was a softball glove. I also liked the darker leather and overall look of the new glove a bit better. Plus, the old glove has this neoprene inner-sleeve that I was never in love with. Still, every so often (like yesterday), I break out the old glove to play catch, and it feels great.

But this story probably pales in comparison to the time my wife found Phil’s lost glove. He accidentally left it on the roof of his car (yikes!) and lost it on the freeway. That day we went over to his house to try our first ever homebrewed beer (IG: @bleacherseatbrewing) and he told us the story. We were on our way to a 1-year old’s birthday party, and got on the freeway. As we did, Suze shouted. She had seen the glove! It was right at the start of the on-ramp. We called Phil to let him know, and he was able to retrieve it without getting run over by a car.

Readers: Did you ever lose and miraculously find your glove? Let us know! And share your topics…and this story with your friends.