Charles Adams is How 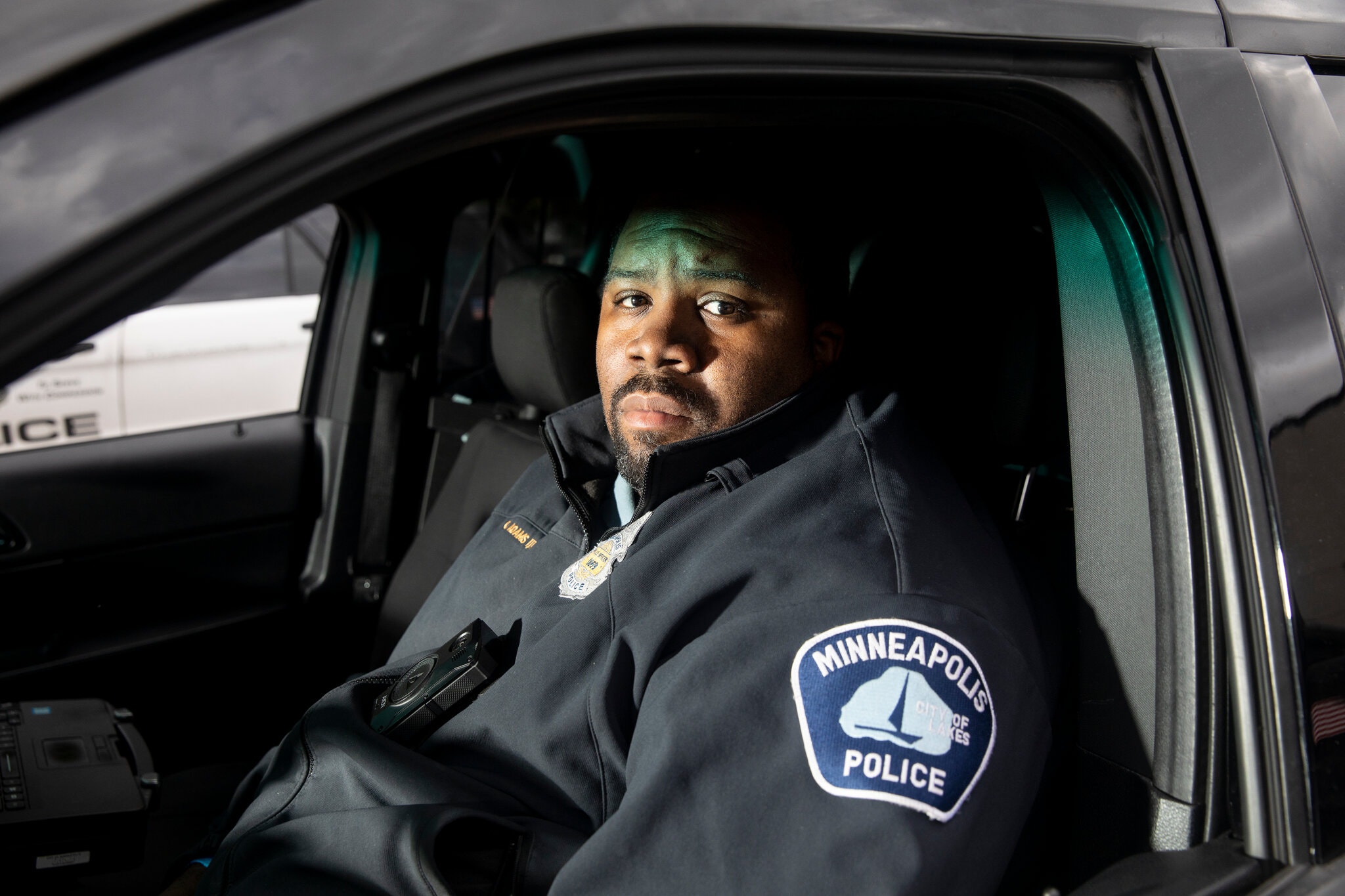 Over the past half year, I’ve wondered many times how the hell we turn this around. ‘This’ could be any number of challenges in 2020: the pandemic, the police violence, the looting, embarrassing politics, an environmental crisis, hell – even being productive on another Monday while working from the second bedroom. It’s still a new feeling to me – that haunting notion that – no – everything’s not just going to turn out OK. It doesn’t just happen by way of karma or divine justice.

For all the good fortune in my life – and there’s more than I could ever rightly ask for – I’ve worried and wondered over and over this year – how the hell do we turn this around?

Of course, the answer isn’t all at once, but part of the answer can be found in this story about a Black Minneapolis police officer and high school football coach: Charles Adams.

This story comes by way of The New York Times, so I’m trusting my MN readers to set me straight if the local papers have already told Adams’ story. This is a 5-star story from Kurt Streeter, with incredible photography from Tim Gruber. You must read it.  To summarize Adams’ impact, consider this description: “His work is a parable, testimony in troubled times to the power of everyday people who provide steadfast care to struggling communities.”

Adams grew up in North Minneapolis, which is a very tough neighborhood. He attended Minneapolis North, followed the path his dad helped forge as a Black officer in the 60s and 70s, took over coaching his high school football team and had a zero-win team winning the small school state championship within five years.  He was protecting his neighborhood and he was making the local football team a source of extreme pride.

As an officer, he used his smile to disarm many situations. His former squad car partner Todd Kurth described Adams as, “[C]ool as a cucumber in every situation. He could be firm when he needed to, no doubt, but he also had this ability to win people over and defuse tough situations. He had a need to help.”

As a coach, he cares for his players always. Through high and lows – wearing medals or bracelets – he always shows love. That’s the only way he thinks it can be done with kids, many of whom come from very difficult situations.  In the words of a local pastor, Adams is, “one of the rocks of this community.”

And Adams knew everything would change after watching the video of George Floyd being killed by an officer Adams knew. The city would, as Streeter described it, “convulse”.

With what you know now, picture Adams, suited up in his riot gear, Zooming his players before heading out into the chaos that night.

“I got to see your faces before I go up in here,” he told them. “I have to see you guys.” Coach, you’re going to be OK, they said, voices cracking with emotion. Everything is going to be all right. It was their way of boosting him up, as he had always done for them. “Before I hit the streets, I have to tell you guys something,” Adams replied. “Just know that I care. I’m not sure what is going to happen tonight. I’m not sure if I am going to make it back and see you again.” He needed them that night, more than ever. It made sense. “Along with my family, the kids I help, they give me a higher purpose,” Adams told me. “There’s a way that they help save me, and that night showed it.” They needed him, too. “We just wanted to hear from him,” said Zach Yeager, the team’s quarterback. “He sets the path and gives us so much. When everything was going crazy in this town, it was good to have his back.”

The fallout from Floyd’s death was immediate in Minneapolis. It hit Adams directly. His day job as North’s in-house police officer had been as important to him as coaching the football team. He was inside the school each day, more counselor and calming uncle than a cop. He ate lunch with the students and didn’t carry his gun. Instead of a uniform, he wore khakis and a polo shirt. In June, the city’s school board voted to end its contract with the Police Department. Adams could remain as the football coach but no longer work inside the school as an officer. The move struck many at North as wrongheaded. Mauri Friestleben, the school’s principal, publicly criticized the ruling. On Facebook, she called Adams a life changer who “stands for what is good within my school, what is good within the Police Department, and what is good within Minneapolis.”

This story has a pretty crazy left turn at the end, but rest assured that Adams is still coaching his high school team. An inspiring read. – PAL

Source: “As a Coach and a Cop in Minneapolis, Where Would He Draw the Line?”, Kurt Streeter, photography by Tim Gruber, The New York Times (10/26/2020) 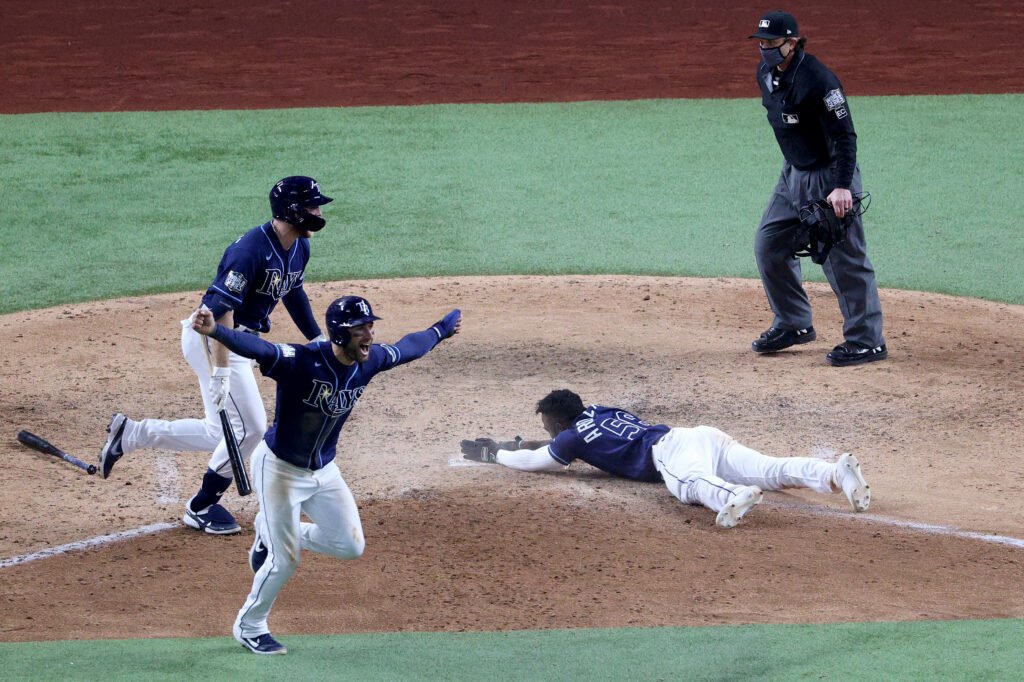 But what didn’t suck was one glorious night – World Series, Game 4 – when all was right with the world. The Dodgers were one strike from taking a commanding 3-1 lead. The Rays had two men on, facing Kenly Jansen, the Dodgers’ longtime and though once dominant, now shaky, closer. The runner on second led off the inning with a bloop single that Dodgers’ second baseman Kike Hernandez came about as close to catching as you can without the ball hitting your gloves.  The Rays’ hitter was Brett Phillips, who is probably the last person they would have picked for that at bat (indeed he was the last hitter on the Rays’ bench). Phillips is a career .202 hitter, with a career OPS+ of 69, which is VERY bad. Phillips hadn’t had a plate appearance in 17 days. So of course, on a 1-2 pitch, he does this (starting at 2:34).

That hit should have tied the game, at best, for the Rays. How does Randy Arozarena get all the way around to score from first on a soft single to right center? A comedy of errors, not all of which are clear on the first broadcast view. First, Dodger centerfielder Chris Taylor absolutely boots an easy play. It seems impossible for a major leaguer to do this. But in the biggest moment of his career, Taylor did. Then, in his haste to make up for his mistake, his throw is off-line. So Dodgers first baseman Max Muncy cut it off and threw home. But his throw was to the wrong side of catcher Will Smith’s body. Smith had to wait for it on his right side and then come back to the other side to try to make a tag. Smith knew he had to hurry. Except, unbeknownst to him, he actually did not. This is because Arozarena stumbled and did a full somersault about 30 feet from home. He tried to get up and get back to third. If the Dodgers had realized he fell, he would have been easily out, and the game would have gone to extra innings.  In fact, let’s get back to Muncy because I can’t stand Muncy, and I think he makes the biggest screw-up on the whole play, even worse than his bad throw. Check out this still frame. This is right after Muncy catches the ball.

Arozarena is literally on his back, Muncy has the ball, and he turns his head toward home. He probably could have run over and tagged Arozarena himself! But he panicked and made that awful throw. Also, what in the world is Jansen doing standing where he is?

But let’s get back to Smith, who thought he had to hurry, not knowing he had all the time in the world. But he hurried too much, and the ball glanced off his glove, hit the umpire, and rolled away. Arozarena noticed the ball slip by, reversed course back toward home, and made the coolest awkward slide in baseball history, slamming home plate repeatedly for emphasis. Series tied 2-2.

I experienced this amazing moment in a way that is likely familiar to other parents reading: belatedly. I had watched much of what had already been an incredible, back and forth game quietly on my phone while my kids enjoyed a movie night, cuddling with me on the chair. But finally it was time to put them to bed and I had to put the game on pause. As I read Harry Potter (nearing the end of Book 7!) to the boys and they drifted off to sleep, I kept dreading an MLB.com notification about a Dodgers win, or a slew of texts from my buddies all saying more or less, “God damnit.” But the notification didn’t come. The texts didn’t come. I started trying to estimate in my head where the game might be, as I had turned it off around the 7th. At the earliest possible moment I kissed the boys goodnight and dashed downstairs. As I ran down the stairs, I got two texts. I turned on the TV in time to see the following 5 seconds (starting at 5:14):

PURE JOY. Arozarena slamming home. Dave Roberts spitting in disgust. I know it’s good but WHAT JUST HAPPENED!?!?!?! Is it over or tied? I tried to rewind but we are staying at my parents’ house and I had forgotten to record the game on their DVR. AGONY. I start texting.

I finally remembered I can get my YouTube TV on my parents’ TV and I watched the whole inning from the start. I watched and watched and watched – and I howled with laughter. I stayed up way too late, watching every angle, reading funny tweets, and harassing my Dodger fan buddy with a GIF of Roberts spitting.

Every Dodgers fan after that ending pic.twitter.com/s15brd9ckL

I listened to seven different radio calls of the play (for my money, Fox Deportes’ call is the best: “NO HAY NADIE!”).

I also found this amazing video, shot by Giants pitcher Tyler Beede, who was at the game in person.

What a moment to see in person, couldn’t be happier for Brett! pic.twitter.com/IArHMcjdYi

LOLLL. “LET’S GO! LET’S GO! SUCK IT!!!” So funny. I may have a new favorite Giant.  So, even though the Dodgers won the World Series, Game 4 was like Cinco de Mayo. A battle was won, though the war was ultimately lost. But that battle was so glorious, so…perfectly baseball. I will remember that feeling and that game forever. For one night, it seemed like the Dodgers were going to get to year 33, and life was good. Baseball Gods willing, it’ll be another 32 years before they win another one. I’ll be 70. Amen. -TOB P.S. Lots of great things were written about Game 4. My favorite was Emma Baccellieri’s story, “How to Write the Perfect Ending to a Baseball Game in Seven Steps,” filed in the middle of the night, just hours after the game ended. I highly recommend it.

PAL: I still can’t believe how many things MLB baseball players do poorly on that play:

Video of the Week The rare four-banger:

Rice just basically kneeled three straight plays and kicked a 45 yard fg for the win in OT and this happened. pic.twitter.com/EyxpYfrfSS

If Covid made dicks fall off, the pandemic would have ended like 6 dicks in.

Song of the Week: Sturgill Simpson – ‘All Around You’ (Live from the 59th Grammys)

I am trying to be more…optimistic in life. I’ve got, what – 20, 30 more years left – and my family history says I have less. Now the old Stanley Hudson would’ve found something to complain about with this actress. But that’s no way to live life! Look at this healthy, sexy, pretty, strong young woman. Come on, people! She…is…hot.