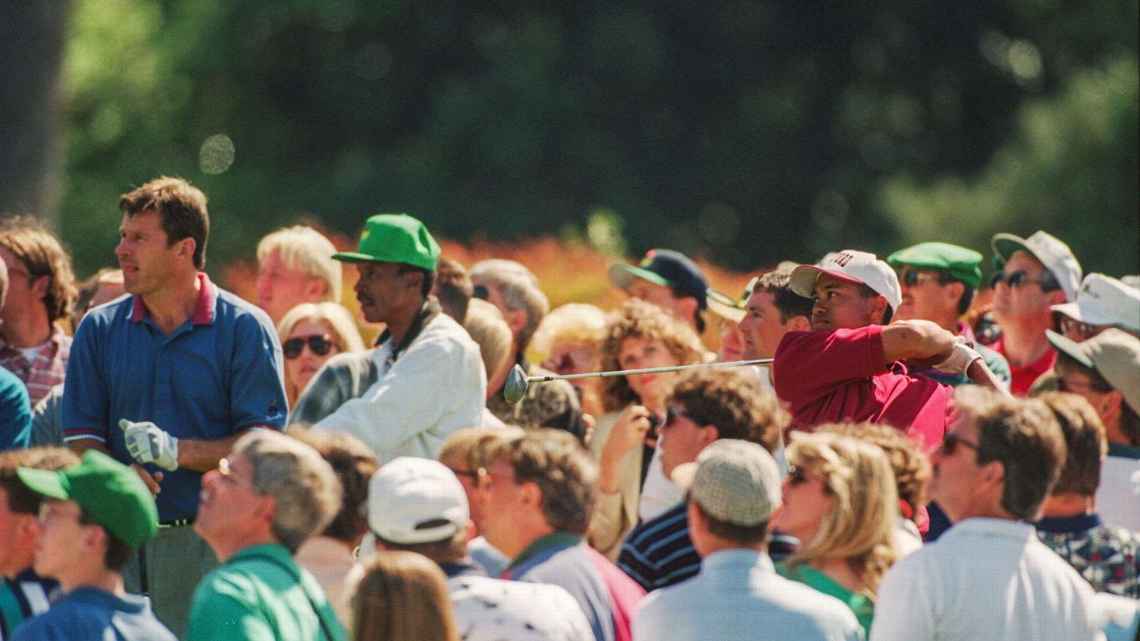 The Masters is a two laptop sporting event – one laptop for work, and one laptop off to the side streaming the tournament. It’s 80% Tiger watch for me. With the tournament upon us, I had to share this story about Tommy Bennett. Bennett, a local Augusta caddie, was on Tiger’s bag for the amateur’s first Masters appearance back in 1995.  There’s a few fascinating storylines to this piece: the history of Black caddies at Augusta National and the courses in the surrounding area, Bennett’s early baptism to Augusta National, the anecdotes about the regular skins games at the local muni between local Black caddies (Bennett’s putting has been slipping, and at 71 carries a 6 handicap), and Augusta National’s heel-dragging commitment to tradition and segregation. Above all, this is about Bennett being on the bag for the young phenom, his retelling and – for a week – his small role in Tiger’s ascension.  The idea of having Bennett on the bag for the Stanford freshman and reigning U.S. Amatuer champ, was local knowledge – something that’s less and less valued these days. Also, wasn’t his choice – he was assigned to the kid by the club. After deciding, as a 63 year-old smoker, he couldn’t carry the bag on the hilly course for his son, Earl Woods had a long walk and talk with Bennett early in the week. He essentially told Bennett that they’d see how it goes early on in the week.  Tiger played a practice round with Nick Faldo. Per Ian O’Connor:

The oversized galleries couldn’t get close enough for their first look at the phenom, who gave them something to talk about on the 500-yard 15th hole when he blew his drive 70 yards past Faldo’s, hit a 9-iron to 4 feet and made the putt for eagle. “Faldo looked stunned,” Bennett recalls. Woods grabbed lunch, then turned his first day at Augusta National into a 36-hole day. He had beaten Trip Kuehne in the most dramatic U.S. Amateur comeback ever, erasing a six-hole deficit in the final, and now the runner-up wanted another crack at him. They agreed to play a $5 match. Bennett was reading Tiger’s putts, picking his clubs and telling him where to land his approaches. “Damn, you’re good,” Woods told him late in the match, when Tiger, down three, charged past Kuehne again by winning the final four holes.

And on Thursday of the week, when Tiger would debut as a teenager playing THE FRIGGIN’ MASTERS, Bennett still remembers this incredible bit:

Tiger played Wednesday morning with Norman and Nick Price but cut his round short when he felt a spasm in his back on the fifth hole. He got treatment on site, then played the Par 3 Contest with Gary Player before his father made it official and informed Bennett that he had passed the audition. After Woods caught five hours of sleep and went on a Thursday morning run, he met Bennett at the course for his 1:03 p.m. opening-round tee time with defending champ Jose Maria Olazabal. The caddie looked inside Tiger’s black leather bag and found a problem. “You’ve only got three balls,” Bennett told his player. “That’s all I need,” Woods responded. “Man, this is Augusta National,” Tommy told himself. It was a raw, rainy day, and Woods’ heart was racing on the first tee. He crushed his opening drive over the right bunker and then landed his sand-wedge shot safely on the green, 25 feet from the cup. Woods had prepared for Augusta’s lightning-fast greens by putting on Stanford’s hardwood volleyball court, yet when he hit his downhill putt too hard, he watched in horror as his ball spilled off the green and toward the gallery. Bennett had never seen that before at the Masters. He told Tiger, “Listen, we all get nervous. We’ve got a long week here. Just chip it back up there and make the putt.”

I’ve read that anecdote several times now. Still can’t get over Tiger having three balls in his bag. And I love Bennett’s advice after he cooked his putt off the green. Both of those details stick with me. 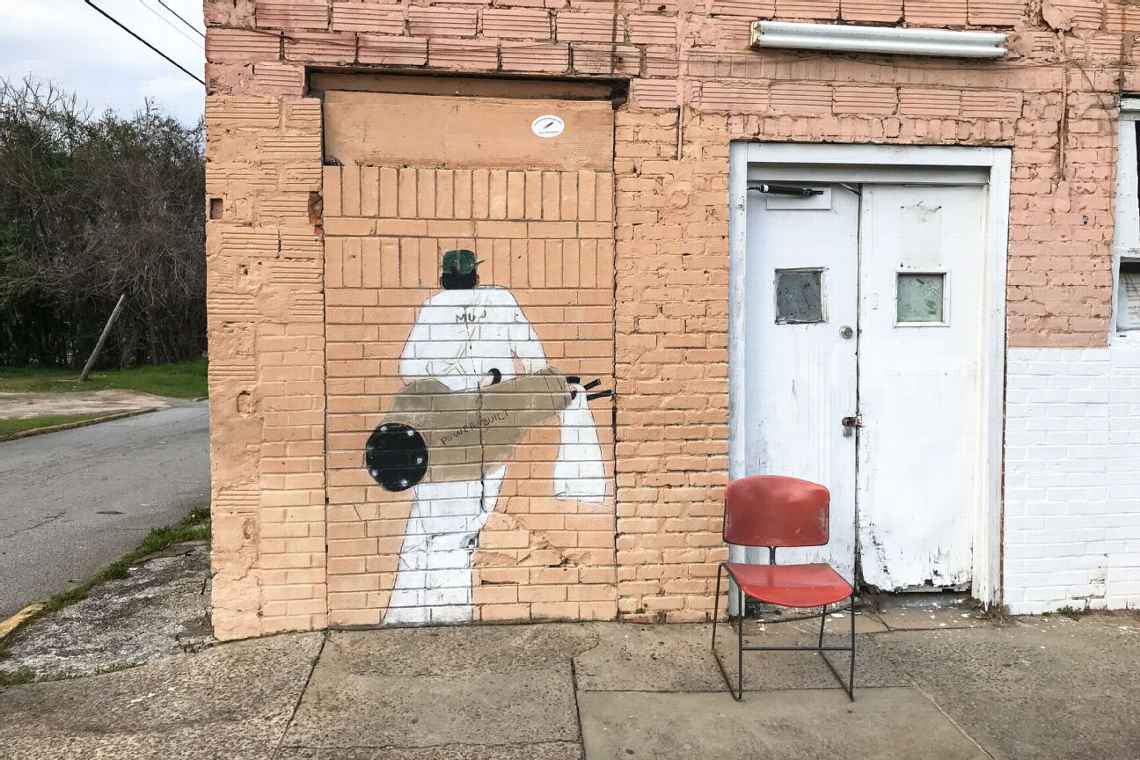 This is a cool story about a relatively anonymous guy working alongside a great. Of course these caddies aren’t executing the shots, but – hey – there’s only one dude out there walking the course alongside the player. They are a team out there – caddies and golfers – and for one week, Bennett was on the same team with the kid who would become the greatest. Definitely worth following the story link and reading the full piece from O’Connor.  – PAL  Source: “The journey of Tiger Woods’ first Masters caddie, Tommy Bennett”, Ian O’Connor, ESPN (11/10/20) 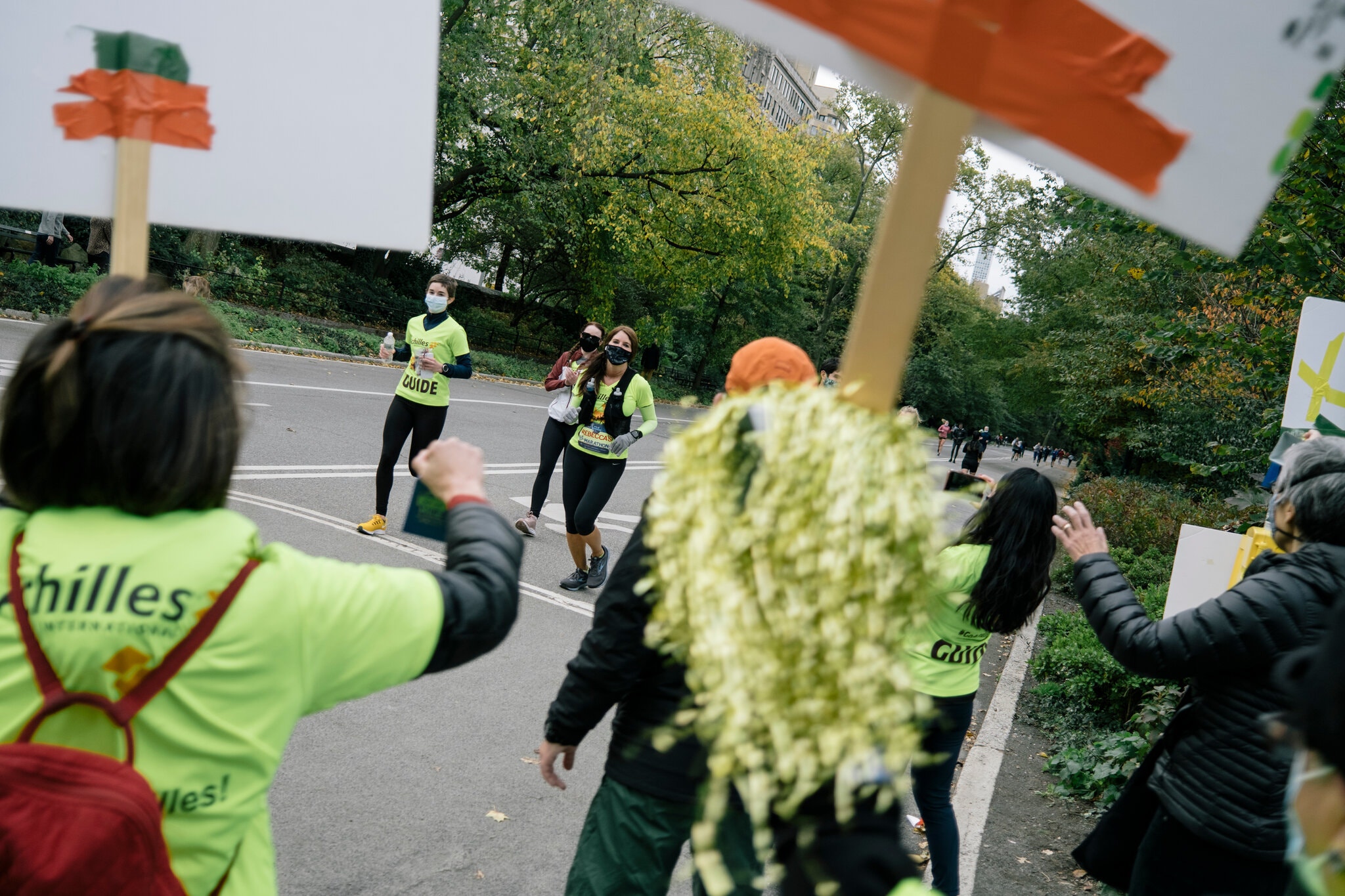 I was in the middle of training for the Vancouver Marathon back in March. The race was scheduled for early May, and – it’s laughable now – but I remember checking my email daily wondering if they were going to cancel the race. In October, the Twin Cities Marathon back home is a great reason to return home and run the marathons with some collection of my sisters. Obviously, that didn’t happen either.  I was also hoping to run a race with Natalie this summer in one of the national parks. Nope. Instead, we made a course in Oakland that Natalie ran with our friends, Basma and Chris. I was the course designer, and Natalie made race shirts. The shirts were great, my chalk markings on the course were not, much to the dismay of the (three) racers.  Throughout the pandemic, I’ve seen virtual marathons pop up. You can register, run the distance, get the shirt and fill check that box for the year. As well-intentioned as the idea came off, it wasn’t the real thing in my mind. Far from it.  And then I read this story about this year’s New York City Marathon. It was supposed to be the 50th anniversary, and this was the first time I felt the draw of one of these ‘unofficial’ races.  In 2019, there were over 53,000 runners in the race, each with their reasons to run. And the reasons people ran this year are similar to years past – to prove something to themselves, to process a loss, to meditate, to celebrate the city they love. If anything, for them to run this year is more inspiring without the banners, spectators and streets closed to traffic. I don’t know why this story and this race finally got that point across to me, but it did. These runners had an excuse to skip it this year, and they didn’t take it. 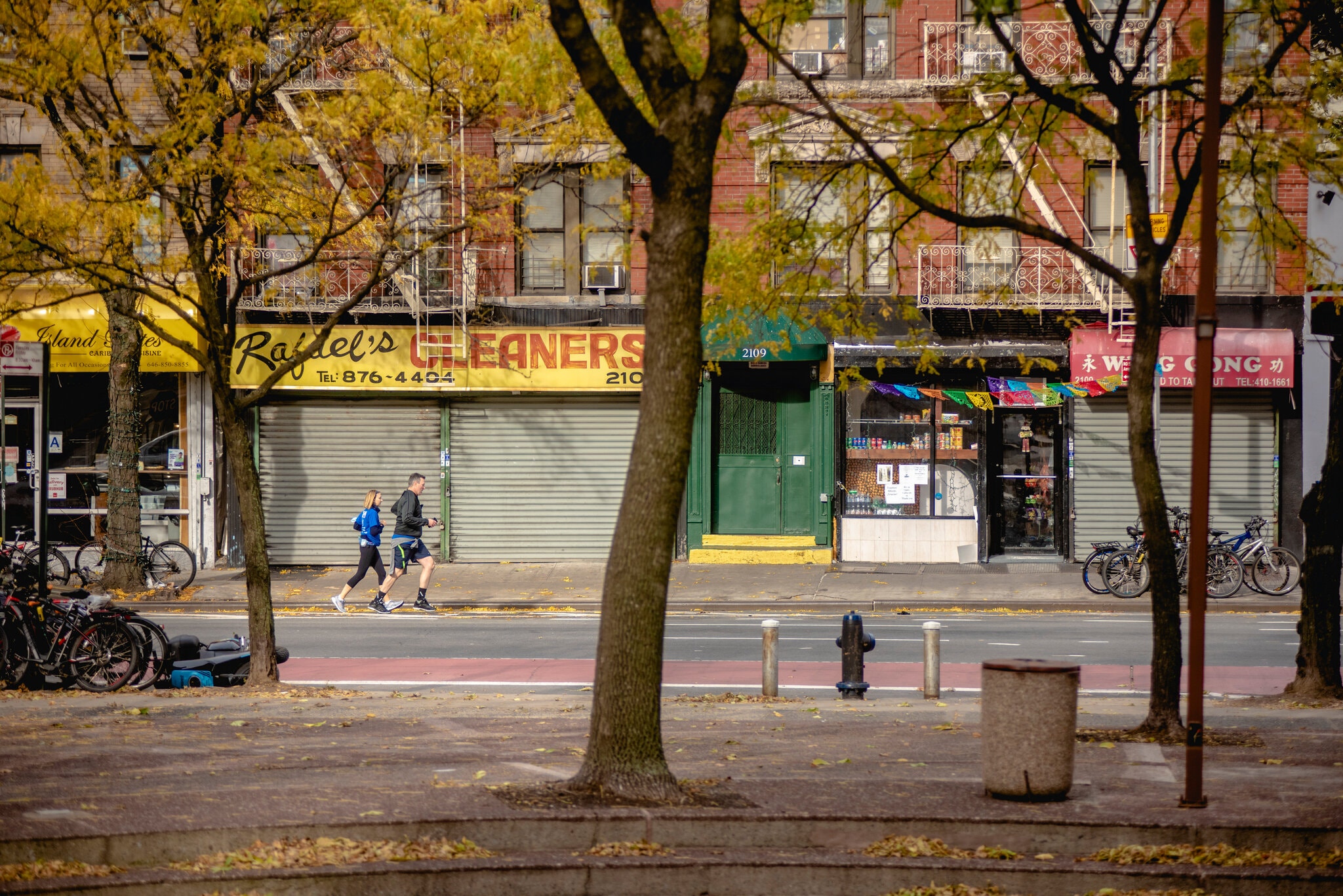 Kristina Nungaray, who started the race in Brooklyn on Sunday morning, was singularly focused on reaching the finish line in what would be her first marathon. “Running for me in 2020 has been like this primal scream I needed to get out,” Nungaray said last week from her home in Jersey City. “When those unknowns become a little too oppressive, I would get out and run.” Two days after she signed up for the virtual marathon, she received a call from her family in Texas. Her father had Covid-19. During a run, she came to terms with the fact that her father might not survive. And it was after a run through Jersey City that she got a call. A nurse offered to read text messages to her father aloud. “Essentially that is how we said goodbye, via text message,” she said through tears. After going to the funeral and quarantining upon her return, she started running again. “It was one of those things that helped me breathe better,” she said. “And there was something in the back of my mind that reminded me, ‘Oh, yeah, you’re registered for this marathon.’” She has felt a pull to do a marathon in tribute to her father, in recognition of her city, in pursuit of herself. “I signed up for this race to push me out of my comfort zone once upon a time ago,” Nungaray said. “And now I’m doing this race to move forward and reconnect me to my comfort zone.”

I think I’ll have to add the NYC Marathon to my list. – PAL Source: “The New York City Marathon Was Cancelled. Runners Ran the Course Anyway.”, Talya Minsberg, The New York Times (11/2/20)

What started as a peaceful morning of kayaking turned into a close call for two friends at Avila Beach.
Video shows the pair appearing to almost be swallowed by a humpback whale.https://t.co/dJZulNZedN pic.twitter.com/JEyZibxjxi

His second in two days, Jon Rahm skips his way to a hole-in-one at No. 16 – on his birthday, no less. #themasters pic.twitter.com/rtefAN5XtH

Not exactly what we had in mind https://t.co/RydKGCk9RA

Song of the Week: Warren Zevon – “Keep Me In Your Heart”

[A] lot of the people here don’t get trophies, very often. Like Meredith or Kevin, I mean, who’s gonna give Kevin an award? Dunkin’ Donuts? Plus, bonus, it’s really, really funny. So I, you know, an employee will go home, and he’ll tell his neighbor, “Hey, did you get an award?” And the neighbor will say, “No man. I mean, I slave all day and nobody notices me.” Next thing you know, employee smells something terrible coming from neighbor’s house. Neighbor’s hanged himself due to lack of recognition.