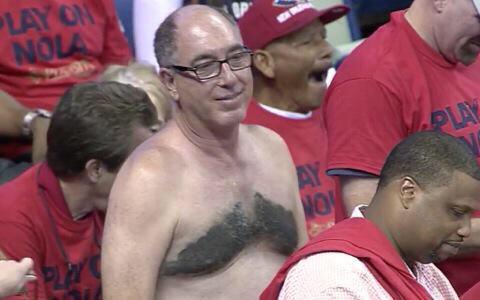 This is why the Warriors are up 3-0 in the series. God does not reward Anthony Davis fandom of this nature.

Monday was Patriots Day in New England, which is something I have to experience firsthand in my life. It’s a recognized holiday, so no school and no work. The Boston Marathon (the longest running marathon in the world) kicks things off, which by all accounts is 26.2 miles of well-wishers cheering on 30K+ runners fulfilling a bucket list accomplishment. That’s followed by a day game at Fenway. All join in the festivities, and the runners represent seemingly all makes and backgrounds. But back in the mid 1960s, this was not the case. “The universal thinking among sports’ male powerbrokers was that women were not physically equipped to endure the rigors of the marathon distance of 26.2 miles. They claimed that the strain would cause women’s uteri to fall out or that they would become musclebound and grow hair on their chests.” Now, I don’t need to tell you that isn’t the case anymore, but I do need to tell you about a series of photographs. Three pictures that capture perhaps the moment when the shift took place for women’s athletics.

Here’s a story about that moment, the leadup, and the culture shift that followed. To quote Julia Chase-Brand, a running legend, “The iconic photos of this encounter clinched it: American women were not going to be pushed off the roads, and now a sports issue became a feminist issue—which of course it always had been.” – PAL

Source: “Behind The Photo That Changed The Boston Marathon Forever”, David Davis, Deadspin (4/20/15)

TOB: A very good article on a story I had never heard about before.

The Closest Thing The NBA’s Got To The Godfather

Great stories are about perspective, which is yet another reason why you all should bookmark The Stacks series on Deadspin. They find the best sportswriting from throughout the years and post them (with author permission). What’s cool is the time between the original publication of the stories and the moment you’re reading them adds yet another layer of enjoyment and and intrigue. This edition sheds light on Pat Riley when he first went to Miami to coach. This is before he won with Shaq and Wade, before he courted Lebron, won 2 more championships, and the subsequent parting of ways. The dapper Riley’s upbringing will surprise you, and the 1995 cultural references will bring a smile. – PAL

“I want to treat my players to the best. If I’m having a team party, I want white tablecloths, I want china, and I want silverware. I don’t want fuckin’ plastic plates. And I want a flower arrangement in the middle. And if the towels are hotel white, hey, put some color in there, I don’t give a shit. I want my team to fly first-class, to stay in first-class hotels. I’m gonna ask them to do a lot. So tell me, is that wrong, wanting them to have the best?”

“And the clothes?…They’re really all Armani?”

He looks at me with disbelief, even irritation, squinting until the hint of a grin forms at the corners of his mouth. “’Cause it’s good shit, that’s why.”

Stanozolol: The Old-School Steroid Worth The Risk

Until this season, it had been seven years since a MLB player tested positive for using Stanozolol (this is is what sprinter Ben Johnson tested positive for, and what Barry Bonds is accused of taking). This year, three pitchers were suspended 80 games for a positive test. It’s an old school anabolic steroid, and an easily detected one at that. However, during the past six season a whopping 125 minor league players have been busted using the steroid. What gives? Perhaps the risk (80 game suspension or roughly ½ a big league season) is worth the long-term rewards. Four-time olympian Francis Dodoo, who now serves on the World Anti-Doping Agency committee, might sum it up best: “You don’t just dope, get caught and return to where your body started.” I guess some guys just take a short-term risk, and if they get burned, then they still have a better shot at reaping the benefits down the line. – PAL

An interesting interview by sportswriter Jeff Pearlman, who once wrote a very unflattering book about Barry Bonds, with Bonds’ son Nikolai. Nikolai, a former Giants bat boy and now in his mid-20’s, opens up about growing up as Barry’s son – both the good and the bad. It’s a complex relationship, to say the least. But Nikolai clearly cares about his father, and strongly believes that his father belongs in the Hall of Fame:

“My dad’s job was what exactly? To entertain. That’s it. That’s the first reason. Second is, as you said, he didn’t break any rules of the game. So what did he do wrong? Third, Hank Aaron admitted to greenies. An enhancer. Babe Ruth drank during prohibition. Illegal. Ty Cobb beat a woman during a game. What we are talking about is someone who is enhancing his performance within the rules of the sport he plays to entertain the rest of this world … and he is getting crucified for it.”

But my favorite part is this exchange:

Q: In exactly 33 words, can you make a Hall of Fame case for Jeff Kent?

PAL: Is it just me, or did Barry Bonds’ son admit that his dad took PEDs:”…[H]e didn’t break any rules of the game. So what did he do wrong?…Hank Aaron admitted to greenies. An enhancer. Babe Ruth drank during prohibition. Illegal. Ty Cobb beat a woman during a game. What we are talking about is someone who is enhancing his performance within the rules of the sport he plays to entertain the rest of this world…” Also, I don’t believe Barry Bonds’ son was ever homeless as he claims.

(Explicit language, but so worth it)

Steph Curry is the truth.