Thing We Already Know: The NFL is Awful, Evil

Working PR for the NFL must be a nightmare. The latest example came this week when the NFL fined Steelers players William Gay and DeAngelo Williams for uniform infractions. Their crime? Gay wore purple shoes during a game for domestic violence awareness in honor of his mother, who was shot and killed by his step-father when Gay was 7-years old. 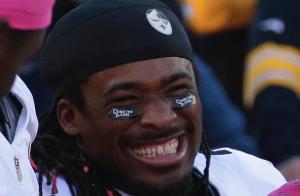 These fines for Gay and Williams came on the heels of the NFL fining Steelers linebacker Cameron Heyward for writing “IRON HEAD” on his eye black in honor of his late father, the great NFL running back “Iron Head” Heyward, who died a few years back from brain cancer. Just what the hell is the NFL’s problem? Seriously. I get it – if you allow some messages, then players will begin to push the line. So what. As long as nothing is inappropriate, political, or an advertisement, why do they care? Because they’re the NFL and they are evil and they do. Roger Goodell is an idiotic, heartless human being. I wish he would just go away. And I feel sorry for the PR professionals working for the NFL who have to spin this – they must hate their job. For their part, Gay and Williams asked that their fines be donated to support their respective causes. Good for them. -TOB

PAL: I have nothing more to add on the NFL. As I said last year – I’m just out. Granted, I’ve never been a huge football fan, but the NFL sucks so consistently that they’ve lost me as a casual sports fan. Baseball is too good. The NBA is too good. The NHL playoffs are too good. Soccer is getting way better. What the hell do I need the NFL for, anyway? They can no longer see the forest for the trees. When common sense is involved, the NFL is incapable of making the obviously correct call. I’d love to hear Susan O’Brien’s take on this (TOB’s wife), as she’s got 10 years experience in the PR industry and is as good at her job as anyone I know.

Terri Upshaw – widow of deceased football great Gene Upshaw – is the daughter of Steve Buich, the owner of Tadich Grill, 160+ year-old SF restaurant. When she was 23, she met and fell in love with Upshaw. Earlier this week, she told the Washington Post that her family disowned her because Upshaw was black.

“Her parents, now in their early 80s, and siblings have never met Upshaw’s sons, 28 and 25. She says they didn’t reach out when her husband died. She says that she has tried over the years to make contact with her family — that they ignored her at her grandmother’s funeral. When her oldest son was 3 months old, she says, she took him to her parents’ house and was ordered to leave.”

However, The Washington Post article leaves out one detail, and – according to Steve Buich, it’s the most important detail: Gene Upshaw was married when he and Terri started dating. Per the SF Chronicle: “[Steve Buisch] says that his decision in 1983 to disown daughter Terri Upshaw, who was 23 at the time, had to do with the fact that she’d begun a relationship with a married man — pro football player Gene Upshaw, who was 38 at the time, recently retired from the Oakland Raiders, and in the process of getting a divorce.”

Here’s the deal: regardless of where your gut might fall on this issue, isn’t it extraordinarily careless of the Washington Post to publish this without at least noting that Upshaw was married at the time the relationship with his future wife took place? I’m not siding with either version of the story here, and my bet would be there’s probably some truth to both versions of the story; however, you’d think the Washington Post might want to mention that there may have been other factors at play before positioning this story as a father disowning his daughter because she was in love with a Black guy. – PAL

Source (initial story): “Terri Upshaw says she had to choose between family and love”, Loanne O’Neal, The Washington Post (10/25/15)

TOB: Phil said pretty much what I thought – but let me add this: When the story was first reported by the Washington Post, users who had never been to the Tadich Grill flooded the Tadich Yelp page with 1-star reviews. It shouldn’t, but this drives me insane. Yelp is useless when people do things like this. I JUST WANT TO KNOW HOW THE FOOD TASTES. Driving down the rating of a restaurant because you don’t agree with what may or may not be the personal beliefs of an old man who hasn’t run the restaurant in 20 years defeats the purpose of Yelp.

The New York Times covered a class at my alma mater, UC Berkeley aka Cal, regarding an independent study class aimed at student-athletes with promising professional careers ahead. The class is entitled “Personal Finance and Brand Management in Professional Sports” and it is taught by Stephen Etter, one of the founding partners of Greyrock Capital Group. Etter developed the class after meetings with then Cal football player Nnamdi Asomugha in 2002. Asomugha would go on to do great things, both in the NFL and off the field. Featured in this article is Etter’s current pupil, Cal quarterback and possible 2016 #1 NFL Draft pick Jared Goff, but past students include former Cal athletes Marshawn Lynch and decorated Olympic swimmer Missy Franklin. Etter teaches his students about how to deal with the massive amount of money they are about to be handed, and how to think about money in general. It seems an invaluable resource – I may not have millions, but I sure wish I could take that course. -TOB

Source: “Before Student-Athletes Earn a Penny, a Course in How to Manage Millions”, Karen Crouse, New York Times (10/23/2015)

This one hits real close to home. I’ll try to paint the picture. Como is an offshoot of St. Paul, and it’s mostly blue collar sprinkled with some nicer homes close to downtown (I always thought of it as a neighborhood where University of Minnesota professors lived). Como Lake was the location of my grade school’s annual “marathon” (translation: get neighbors to pledge x amount per mile that you ran/biked/rollerbladed around the lake). The fact that this incredible story takes place in Como makes me smile, and the budding Cross Country refugee at the heart of the story – Innocent Murwanashyaka – is a reminder to never complain. This kid kicks ass in all ways – Cross Country, holding down a job at Menards (think Lowe’s, but Minnesota, with the best commercial jingle ever), and bursting at the seams to go to college. 100% feel good. You can have the phenoms; I want more stories reminding me of the true American Dream. – PAL

Here’s a short, neat article on my favorite website: baseball-reference.com. Baseball Reference is amazing. It has every conceivable baseball statistic for every player who ever played, including stats from the minor leagues. It has statistics as far back as 1871, when Lip Pike of the Troy Haymakers led the National Association with 4 home runs. I routinely get lost, diving deep into weird statistical wormholes. Finding names like Lip Pike are one of the true joys of a baseball-reference visit. One time I wanted to find the time my Grandpa took me to an Angels game when the Angels scored 4 runs in the 9th to beat the Brewers. With a little educated guesswork and some sleuthing, I found the game – it was Thursday, July 25, 1996. JT Snow led off the 9th with a home run, and light-hitting shortstop Gary Disarcina hit a walk-off 3-run jack to win it. My Grandpa had tried to leave after the Top of the 9th – but I wouldn’t let him. Another time I found the date this photo was taken:

PAL Song of the Week: Loudon Wainwright – “The Swimming Song”

Check out our full playlist here. It’s like finding $10 in an old pair of pants.

Maybe I’m spending too much of my time starting up clubs and putting on plays. I should probably be trying harder to score chicks.