One of the more rewarding parts of putting together this weekly digest w/ TOB is finding your own experiences in the stories we post, and I definitely found that in T.J. Quinn’s eulogy of Tom Seaver, who died this week. The story is about our first sports hero. For me – as you all know by now – it was Kirby Puckett. For Quinn, it was Seaver. 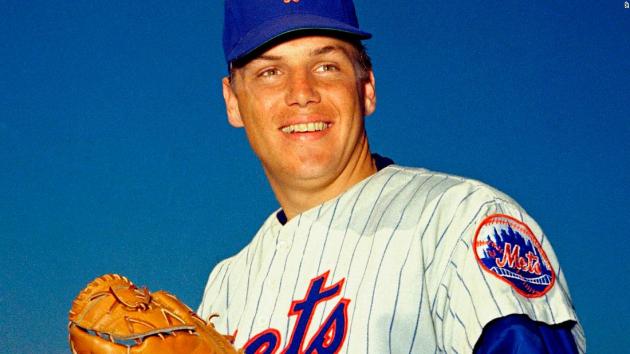 The best pitcher in the game was on my team, had my name, wore the same cap I had. He would certainly understand why I took a black felt-tip pen and, with great deliberation, consecrated the back of my pinstriped Mets shirt with a ragged “41.”

I never forgave my parents for leaving New York City to move to Iowa (long story), but even in that foreign land, when I traced my finger over the raised orange stitches of the “NY” on my cap, the same as his cap, with “Tom Seaver” scrawled under the brim in black felt-tip pen, I knew he was out there. Until an 8-year-old learned about the oblivious cruelty of the adult world through a trade to the Reds. My parents had Walter O’Malley and I had M. Donald Grant.

Even while he was in Cincinnati, Tom Seaver was mine, and I knew that if he could leave, that meant he could come back. He did come back to the Mets in 1983, and then I learned the agony that comes with wanting something to be the way it was. Seaver was 9-14 that season. It wasn’t such a great year for my parents, either; they split up for good.

We can’t fathom it at the time, but we put so much on our first sports heroes. Innocence, home, belonging, faith, optimism – maybe that’s what a hero is to a kid – a personification of all those ideas we can’t yet articulate and don’t yet realize are limited.

T.J. Quinn’s first sports hero became a real person to him. Someone he could call and get updates on Seaver’s vineyard grapes or hear a funny story about his wife. To me Kirby remained the first sports hero; rather, my bookmark to a photoshopped memory of the time in my life when I felt pure joy and belief. So when Puckett had his fall from the pedestal before he died young, it shook something deep down, even knowing that – yeah – these guys are not who we’ve built up in our fantasy world. A lot of sports heroes fall.

In fact, Quinn was mortified this would happen with Seaver. He’d heard the stories from cynical old writers about other legends.

One of the first things I learned as a young baseball writer was that you’d better be prepared to hear some awful things about the men you admired as a boy. That knowing laugh you’d get from the older writers when you asked if this or that Hall of Famer was a “good guy.” Eventually you stop asking.

So when I was covering the Mets in 1999 and it was announced that Tom Seaver was returning to the club as an announcer and instructor, I had the scars of almost three decades to gird me for one more disappointment, what I knew would be the most painful of all.

Tom Terrific arrived in Port St. Lucie late, and he toured the camp in a chauffeured golf cart as though he were riding in a chariot. He reveled and waved the way Roman gods do and he was clearly pleased that he was Tom Seaver. At the end of the day, we newspaper writers waited in the dugout for our audience. He was late for that, too. I turned to Mike Vaccaro of the New York Post, who shared my age and Mets breeding, and I said, “I don’t care who he is, I’m going to rip him.” Vac nodded.

When Seaver did finally take his seat on the dugout bench, he apologized. He was engaging and charming, but I knew with the insight of a now-jaded 29-year-old sportswriter that this was just the act that legends trot out for those on the outside.

I wish I remembered what I said, but at one point I cracked a little joke and Tom Seaver broke up. Fully and loudly. I blushed. Vac leaned over and whispered, “That was awesome.” I whispered back, “I know.”

Tom Seaver thought I was funny. Tom Seaver would come to know my name.

Quinn’s story is about as heartfelt as you’ll find. I knew Seaver was a great pitcher for the Mets before reading this, but now I care. – PAL Source: “Tom Seaver and Why Sometimes You Really Should Meet Your Heroes”, T.J. Quinn, ESPN (09/03/2020)

On Wednesday,  the New York Times introduced an upcoming series of stories like so:

In the coming weeks and months, The New York Times will be inside Cal athletics, virtually and on campus — in Zoom meetings, budget discussions and team workouts. The goal is to provide an inside-out view of the unprecedented challenges facing one university — but, really, all of them.

Whoa. Now, that would pique my interest no matter the college, but of course did so 10x because it’s at Cal. I highly recommend you read the first installment because as you might imagine an inside look at a college athletic department trying to navigate the COVID-19 pandemic, and the problems, both individual and systemic, that have arisen at a place like Cal Athletics is nothing short of dizzying. Reading this I did not envy the people tasked with figuring this out. And I was all set to write about the Pac-12’s decision to cancel/suspend the football season, and the implications for so many people from that decision. And then Thursday happened.

Thursday, the Pac-12 announced a deal that made national headlines.

The Pac-12 announced a partnership with a testing company that allows schools to test their athletes daily for coronavirus. And those rapid tests could potentially lead to earlier start dates for football, basketball and other sports.

The conference said that it had partnered with Quidel for on-site rapid testing at each of its 12 member schools. The schools will be able to get test results back in 15 minutes.

WHOA! The Pac-12 (and Big-10) canceled/postponed the fall football season, while the other major conferences refused to do so, even as positive COVID-19 tests in their athletic programs continued to rise. But suddenly, the Pac-12 has the opportunity to play – safely.

Now,  the Pac-12 is not promising a fall season. But reading the tea leaves, it seems these testing protocols could be in place by October 1, allowing teams to begin practicing by that date and playing games by late October. Pac-12 teams could fit 8 games through December, and potentially be part of any playoff. And on top of all that, the NYT series just got infinitely more interesting, going forward.

I had been annoyed that the Pac-12 canceled their season at a time that seemed premature. They could have kept postponing the start. Following the cancellation, Cal had at least a couple seniors transfer to conferences who plan to play this fall. So while I think that sucks, I am also happy that it seems like they are going to try to play the right way. And as problematic as college football is, god damnit that’s exciting. Go Bears! -TOB

PAL: Just last night, Natalie and I took an evening walk in the Berkeley hills right behind Memorial Stadium. Perfect fall evening. Beautiful. To state the obvious, it’s downright odd to be essentially on campus of a large state school and have it feel that empty. I hope the testing partnership works out, and we can get these athletes back to competing in a safe environment as soon as possible. Any story about progress in terms of testing makes me a bit lighter.

As we left and drove back, passing by the frat houses, we saw four dudes playing a drinking game in the front yard. It was a welcome sight, one immediately followed by concern. That’s a pretty common swing of emotions these days – a semblance of normal followed immediately by a dousing of concern.

You might know that, given the pandemic, the 2020 Minor League Baseball season was canceled. But teams didn’t want to let their best prospects be idle for a year, so they each organized one “Alternate Site,” at one of their minor league complexes. Each Alternate Site only gets between 24-30 players per day, which makes it difficult to train. But exactly how these Alternate Sites have existed has been a bit of a mystery, until this great article by Keith Law.

Law interviews a number of MLB team executives to discuss how the Alternate Sites are operating. The answers are intriguing, revealing what teams value and don’t value. Many teams dotted their Alternate Site slots with top prospects who are not anywhere near helping the big league team. But there’s a reason for that, as the Giants illustrate:

The Giants also have a number of very young hitting prospects at their alternate site, including Marco Luciano, Alex Canario and Luis Toribio…“It’s a huge growth opportunity for them as they see the difference between rookie ball and major-league players. We have a more aggressive weightlifting program for them as well. They don’t need to be ready for the ML tomorrow, so we don’t have to worry about overwork, and we can do more one-on-one instruction and early work for guys who are less in the ‘stay ready’ category.”

Really smart. There are a lot of other interesting anecdotes – I highly recommend the article! -TOB

Video(s) of the Week

Nahhhh this a wild clip 🤣 pic.twitter.com/gnwhKMSrys

Every #SFGiants RBI hit tonight… but all at the same time.
It’s a Jon and Dave clone party. pic.twitter.com/wQw766CwCM

The Giants scored 23 runs on Tuesday. Here’s the radio call of all of ‘em. At the same time.

Song of the Week