Robes are officially back. #MNTwins pic.twitter.com/F246wlSBjn

Near the beginning of the pandemic (a little over six months ago), Joe Posnanski counted down the 100 greatest baseball players of all-time, complete with an essay about each one. It was a gigantic undertaking, and one that this little digest greatly enjoyed. Posnanki’s back with his follow-up: greatest moments in baseball history. A perfect appetizer to the playoffs, which as of this exact moment, has the Twins facing the Astros, i.e. NOT THE YANKEES, in the first round of the playoffs.

Duane Kuiper hits his one and only home run

Do I really believe that Kuiper hitting a meaningless home run for Cleveland, which was terrible in 1977, is a greater baseball moment than Ruth’s called shot or Puckett’s Game 6 homer?

Of course I do. Because I grew up in Cleveland in the 1970s. If I had grown up in New York in the 1930s, I’d have the Ruth homer on there. If I were Garrison Keillor or Steve Rushin, I’d have the Puckett homer on there. The greatest moment in baseball history is your moment, that instant when — among the thousands of baseball games that happen every year — everything comes together just so and a tiny instant of perfection happens.

Interesting that – in describing what makes a moment great, Posnanski uses my greatest baseball moment  – Puckett’s Game 6 homer in the 11th – within his argument about how great baseball moments have to be personal. Of course Puckett’s home run has more historical significance than Duane Kuiper’s single big league home run, but that didn’t even enter a 10 year-old Posnanski’s mind. It’s worth noting I was about the same age for Puckett’s moment as Posnanski was for Kuip’s ‘bomb’. That age is not coincidence.

Of course, Posnanski is absolutely right about the weave between sports greatness and each of our biographies. I regularly tell people that Puckett’s moment is the highest purity of joy I’ve felt to date. Before you jump on me – of course my wedding day was a happier moment. I have many moments of greater joy, but an ‘instant of perfection’, to use Posnanski’s phrase, must also be about purity. It must include an absence of flaws.

What an unending comfort to recall as I go on collecting more inclusions along the way, each one making Puckett bounding around the bases pumping his fist more brilliant by comparison.

With that in mind, what’s your perfect baseball moment, TOB? – PAL

TOB: The Giants provided a lot of pure joy over the last decade, including Tim Lincecum coming out for the 9th in his and my first playoff game, as he finished off a 14 K, 1-hit, 1-0 complete game shutout; three pennant wins, three World Series wins, and lots of crazy moments in between. But to go back a bit farther, I go back to July 25, 1996.

I was visiting my grandparents in Orange County, and my grandpa took me to an Angels game. The Brewers led most of the way, and tacked on an insurance run in the top of the 9th to make it 4-1. My grandpa was not a huge baseball fan and wanted to go home because the game was basically over and he wanted to beat the traffic. Baseball Reference indeed shows Milwaukee with a 97% chance of winning. In fact, while trying to find video of the game, I found this from a look back at the game: “The Brewers added one in the ninth and down 4-1, we can imagine that some of the 16,000+ in attendance were headed to the exits early.” But I said, “No, they’re going to make a comeback.”

In the bottom of the 9th, future Giants fan favorite J.T. Snow led off with a dinger to make it 4-2. After a couple singles and a couple outs, Angels shortstop Gary Disarcina came to the plate and hit a home run down the left field line that just stayed fair – it was one of only 28 home runs in Disarcina’s nearly 4,000 career at bats. 5-4, Angels won. I gloated to my grandpa all the way home. 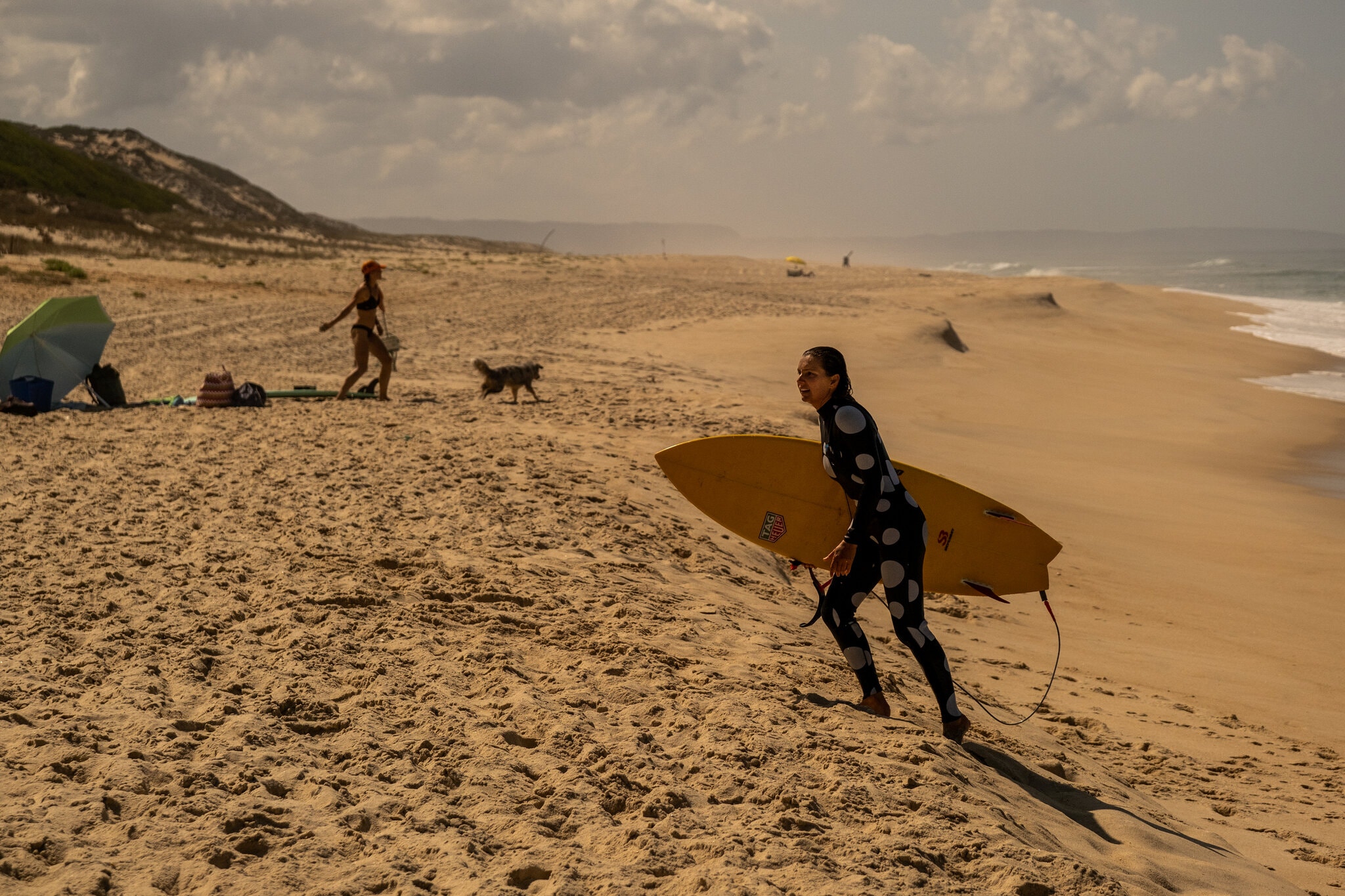 The NY Times multi-media projects alone are worth the subscription. The full-screen video with text overlay pulls you in from the jump. José Sarmento Matos’ photography makes you pause, and Adam Skolnick’s reporting is multifaceted. Just a cool team effort all around.

On the surface, this is a story about a woman, Maya Gabeira, recording the biggest wave surfed this year – 73.5 feet – off the coast of Nazaré, Portugal. There’s so much more to unpack than a record ride.

Of her ride, Gaeira said, “I had never been so close to such a powerful explosion. I had never felt that energy and that noise. It felt really terrifying.”

It’s cool that a woman caught the biggest wave this year, and that Gabeira and a few women are charging right along with the men of big wave surfing. Seven years ago, Gabeira barely escaped death on the same break.

In 2013, Gabeira wiped out on a 50-foot wave and was held underwater for several minutes. She was barely conscious when she grabbed a dangling tow rope, only to be dragged toward shore facedown, getting pulled from the water without a pulse. CPR saved her life, but she had snapped her right fibula and herniated a disk in her lower back.

Her recovery took four years and three back surgeries. She lost all of her sponsors, dealt with an anxiety disorder and panic attacks, and was scolded publicly and warned privately by legends of her sport, including Laird Hamilton, who publicly criticized her after her 2013 accident. 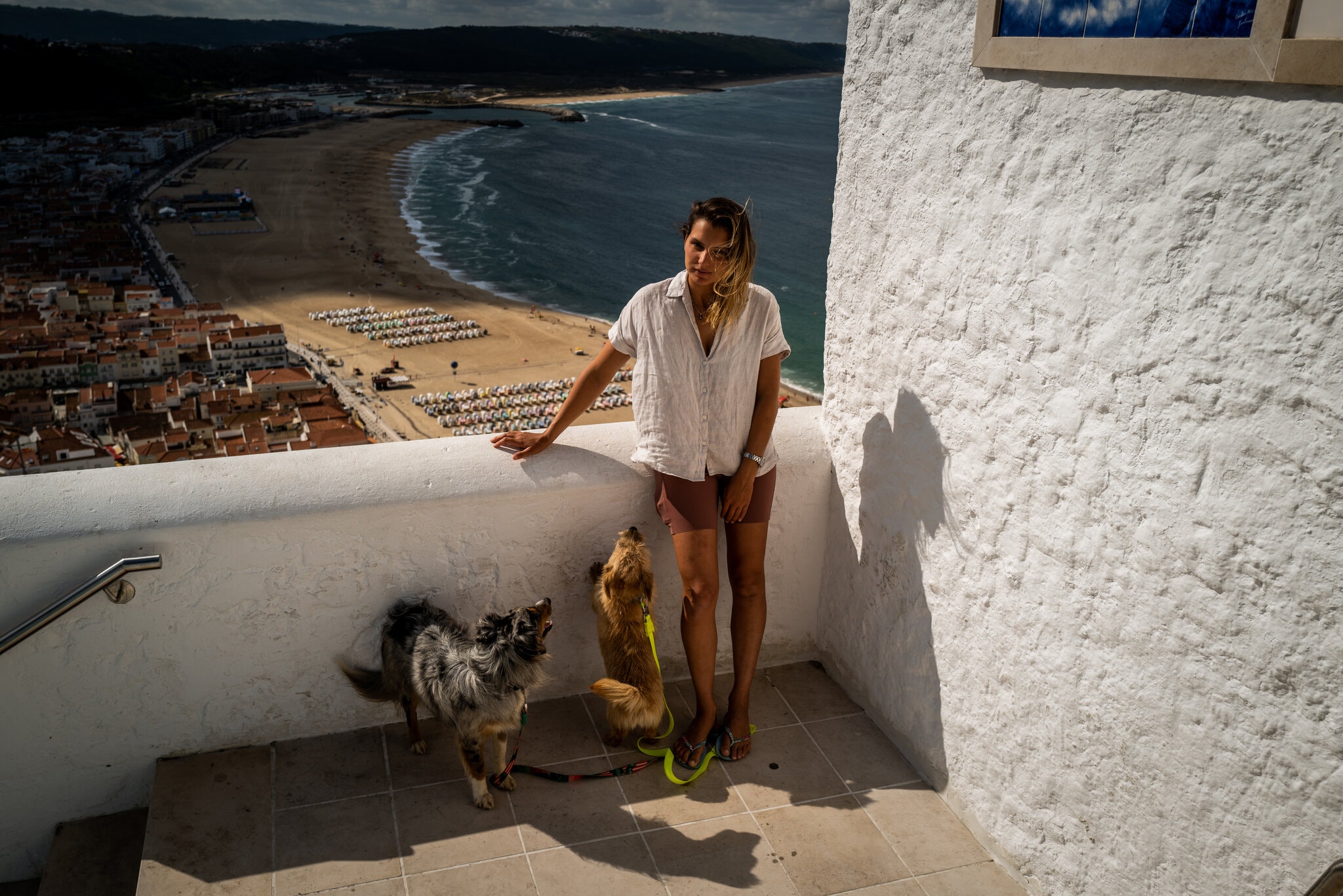 What did Gabeira do? She doubled-down, moved to Nazaré, trained like a beast and got back out there and rode monsters by any measure. I have a hard time imagining the amount of drive it takes to paddle back out there after an experience like that.

But how do experts look at that wall of water and calculate, down to the half foot, its size?

“It’s an imperfect science,” the big wave surfer Greg Long said, “and when we’re talking world records it’s imperative that you bring in a more scientific and specific means.”

Michal Pieszka, a surf scientist at Kelly Slater’s wave pool, led the study in collaboration with researchers. They examined the tides, light and shadows, which can affect perception and size in a photograph, and the objects in each picture. They analyzed both camera angles and the camera lenses involved in capturing Gabeira’s and Dupont’s waves.

I was just talking to my brother, Matt. Our nephew, Anthony Rabeni, made his varsity golf team as a freshman (way to go, Anthony!). Matt and I were remarking how there’s no gray zone in golf, and what a refreshing that quality is in a sport. Golf and surfing…feels odd to lump them together, but it’s correct. No excuses. No restrictions. Not your age, gender, size, race – either you ride it or you don’t. You count your strokes. Simple as that. Hardly the first time this idea has been made, but one worth repeating every now and again.

Maya Gabeira: badass lady on display in the word, video, design, and photography of this feature. – PAL

Is It Fair to Use Tests to Get College Football Players on the Field?

Yesterday the Pac-12 announced it will play a 7-game season, starting November 6. I mentioned in recent weeks that this was a strong possibility after the conference secured rapid testing for each of the 12 campuses.

The business of college football is troubling and layered and problematic as it is; but conducting that business during a pandemic, when kids can’t go to school and many businesses cannot open, and these players are still not being paid is beyond problematic.

As a fan, I’m excited. I know that many of the players want to play, and I don’t want to try to tell them how they should feel, so I’m also happy for them. But as a society there are questions that must be answered.

First, should college sports be played on campuses where students are not allowed to attend class?

I’ve thought about this a lot. I’m ok with that. I think we should be opening what we can, when we can. We can’t safely let 50,000 people back on the Berkeley campus. But we can let 150. So why not do that?

But my final question is should the testing resources themselves (not the money, but the testing machines and materials used in the tests) be used to get college football players on the field? Is this taking tests away from other places that need it? I have no idea, but the San Jose Mercury News’ Jon Wilner set out to answer that question after his a wife asked, “Why is the Pac-12 getting those tests? Why aren’t they going to teachers and other essential workers?” So he called the CEO of Quidel, the company the Pac-12 purchased the rapid testing machines from.

During a 30-minute conversation, Quidel CEO Doug Bryant told the Hotline that he “worried a lot about the perception” that his company’s rapid-result antigen tests, which have the potential to change the battle lines with coronavirus, were being deployed to 12 college athletic departments.

“I’ve said all along that our company would do the right thing,’’ he told me.

The deal with the Pac-12, he added, will help Quidel do exactly that.

“It was bit of a perfect storm,’’ he said. “Larry and the universities needed our tests, and we needed their data.”

Quidel had been providing testing to first responders and nursing homes since May, and they were collecting data that they say will help fight COVID-19, especially as to asymptomatic cases. But they wanted to expand to a younger population.

In order to provide the most effective antigen test for all age groups, Bryant explained, Quidel needs data points. Hundreds of thousands of data points.

All the shipments to nursing homes and first responders have enable the company to refine the tests for adults and symptomatic cases.

“For a greater understanding of performance,” Bryant said, “we have to figure out the right algorithms.

“We wanted a generation of asymptomatic data to give the public confidence that it worked.

Now, keep in mind this is the CEO, and part of his job is to spin the PR on what his company has just done. But I believe him when he says this will help. Of course, want to believe it, too. But these are all hard questions without easy answers, and we all do our best to answer them. -TOB

Why wasn't Ruth Bader Ginsburg honored by the NBA this weekend? In a league that absolutely holds equality as a core value, the icons of that equality can’t only include those who helped the men we see on TV, but those who paved the way for the women who work right alongside them pic.twitter.com/UiTktdFr5w

In a non-covid world, Tyler Herro wouldve hit South Beach after this game and been treated like a god during one of the wildest nights of his life but now this man just gotta go back to his room and eat a Nature Valley bar

Song the Week: Little Willie John – “You Hurt Me”

Well, you know what, Jim, it is not my fault that you bought a house to impress Pam. That is why carnations exist.