This is a story about the unlikely source material that helped inspire a new way of thinking and evaluating talent in baseball.

Daniel Kahneman (Cal grad, TOB) and Amos Tversky wrote Thinking, Fast and Slow, a book about behavioral economics. These guys were not baseball dudes. Kahnman won a Nobel Prize in economics. The book barely references baseball, but it’s a major influence on many general managers, executives, and scouts throughout the game.

Most of us are aware of Moneyball — both the best-seller Michael Lewis book and the Brad Pitt movie (really holds up as an all-time great sports movie) – which in large part details how the Oakland A’s took a fresh look at the stats to find undervalued players. They needed to— the team couldn’t compete with the big market teams in terms of paying big-name players.

In the movie version, one of my favorite scenes is when Billy Bean (Brad Pitt) sits down with all the old scouts and tries to explain how the team needs to take a different approach to evaluations. The scene is a perfect example of what Kahneman and Tversky defined as “the representativeness heuristic” — the idea that assessment is heavily influenced by what is believed to be the standard or the ideal.

While there were other baseball influences at play in Oakland (Bill James’ work on baseball statistics, to name one), it’s no wonder that many decision-makers in today’s game credit the economists’ work in Thinking, Fast and Slow as having a major impact on how they try to evaluate talent for their teams.

Orioles Assistant General Manager, Sig Mejdal, is one such decision-maker. He worked at NASA prior bringing his biomathematics brain to baseball.

“When we look at the players standing for the national anthem, it’s hard not to realize that quite a few of these guys are far from stereotypical or prototypical. Yet our mind still is attracted quite loudly to the stereotypical and prototypical.”

Other executives who likely have a raggedy copy of the book in their office: Andrew Freidman (Dodgers), John Mozeliak (Cardinals), Sam Fuld (Phillies). I’d bet my next paycheck the Giants Farhan Zaidi is on this list, too.  Excellent read. – PAL

Baseball Players…SMH. In an article I otherwise would not have shared here, about how MLB/MLBPA negotiations regarding the expanded playoffs and universal DH are going, Andrew Baggarly included this note from Giants’ MLBPA rep Austin Slater which raised my eyebrows, about player attitudes toward the COVID-19 vaccine:

“It’s case by case how each player feels about (the vaccine),” Slater said. “It’s a decision they need to make individually and with their family. All you can do is provide information and point them in the right direction when they have questions. Hopefully that’s enough for people to make the decision.”

Wait, uh – what? Case by case? That sounds like a whole lot of vaccine resistance amongst baseball players. But then a thought hit me that made Slater’s comment make a lot more sense: Baseball players are generally pretty quiet about their politics, but we hear enough rumblings to have a good idea that as a whole they lean heavily right, and will you look at this:

Every time I return to Minnesota, I’ll do the Body By Bennett run. I can’t remember which of the siblings authored the name the 4-mile loop through Central Park, around Bennett Lake, and back down Transit, but the name stuck. In the spring and summer months, somewhere between 1 and 1.5 miles, the trail passes the softball complex. On weekdays, starting the senior softball leagues are ripping. They dominate the fields on weekday afternoons, when everyone else is – you know – working.

So when I saw this essay from Abby Ellin about her 83-year old dad’s softball league, I had a good feeling I’d be sharing it with you. She doesn’t disappoint. This guy may as a well be playing at Central Park in Roseville. 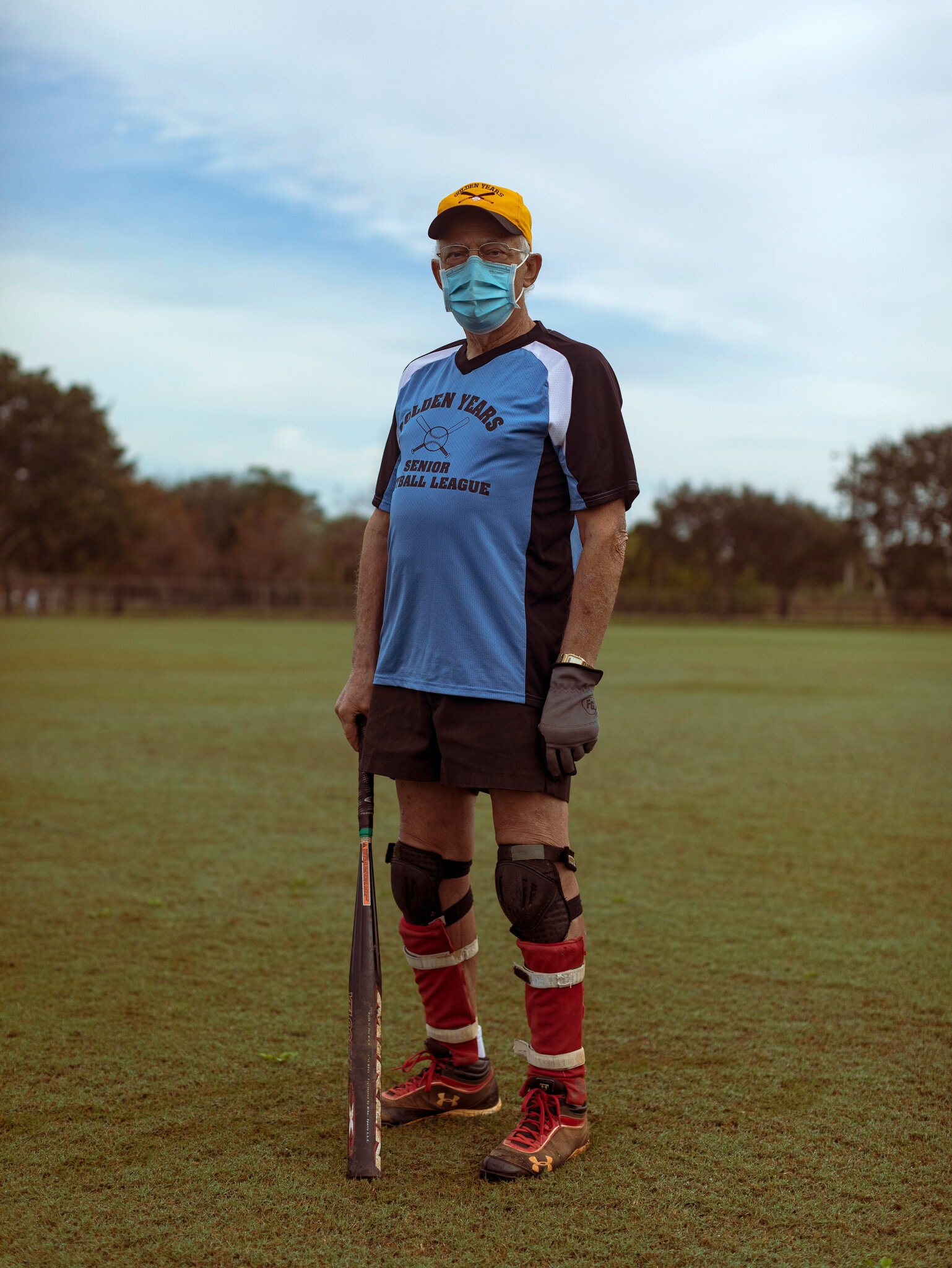 There are sweet moments and hilarious moments, too. Their rebellion to sitting down or sitting out on life is inspiring. Although, the chatter is a bit different:

“You get the vaccine?”

“I keep trying, but every time I go to the website it crashes.”

“The Democrats are keeping the vaccine for political reasons.”

Then there was movement on home plate. “I need a runner!” yelled batter Carl Slutz, who at 86 is one of the league’s oldest players. It was a good day for Slutz (“It’s pronounced ‘Slootz,’” he stressed). If he got a hit in this at-bat, he would be 5 for 5.

I love that these old guys are filling their days doing something that — for many of them, I assume—they’ve loved since they were young boys. It’s something that buoyes them in this world instead of waiting for whatever’s next.

Playing sports has centered him for the past eight decades. He has been voted the most valuable player a few times. He was out on the field the day after one of the worst moments in his life, when my sister died. The camaraderie and oxygen were more critical than ever. Besides, what good would staying home have done?

“It’s not going to change anything,” he said. “I didn’t play well, let’s just say that.”

It reminded me of something Neil Lewis, 87, one of the Golden Years’ commissioners, told me last year. “When you get old, if you just lay around and watch TV you’ll go to hell, in plain English,” he said. “You’ve got to keep your mind going.”

Not so long ago I’d say I’d never play in a softball league. Didn’t appeal to me enough to make it a priority once a week. I loved baseball when I played. Softball felt so casual, and I loved how intense baseball was for me. I relented and played in a few softball leagues in SF. Nothing stuck. We should give it another go, TOB. These old dude’s seem like they’re having a blast.

A heartwarming essay worth the five minutes to read in full. -PAL

Aww, Man Julius Randle was named an All Star this year for the first time in his career. His mom recorded a congrats video and they played it on the jumbotron at MSG, as Julius looked on.

1st-time #NBAAllStar Julius Randle is congratulated by his mom on the jumbotron at MSG. ♥️ pic.twitter.com/qBKLGHYaDb

That’s cute and all, but after the game Randle provided some context that took it from, “Aw” to “I’m not crying, I’ve just been chopping onions”:

“It was definitely amazing,” Randle told reporters after the game. “Throughout the course of this past year, it’s definitely been tough on all of us. But my mother, she hasn’t been able to leave the house; she’s a diabetic. We’ve been extra cautious with her.”

Dang, man. Can we get this woman a vaccine, please? -TOB

"It was just a good solid day. Felt good to be out there with the team, putting pants on again." — Nolan Arenado

Song of the Week: Aaron Frazer – “Over You”

I worked out with a dumbbell yesterday. I feel vigorous.