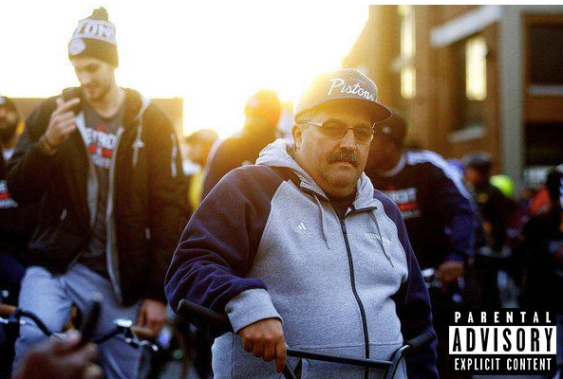 Sometimes it seems that being a professional athlete can be really tedious. That coupled with the fact that many pro athletes are overgrown children can at times lead to some really strange and funny happenings. Take the Minnesota Vikings’ Donut Club. On Saturdays, the players don’t have to arrive at team facilities until 10 a.m. But, as an incentive to arriving early, the players have created a Donut Club – which is exactly what it sounds like and so much more. There are rules to Donut Club: For example, don’t be late; don’t touch the donuts before the designated time (8 a.m.); Always finish your donut; and wear your Donut Club uniform. Yes, Donut Club has a uniform. And it’s kinda sweet:

This is one of the funnier, goofier stories I’ve read in quite a while. -TOB

PAL: These are the seemingly insignificant traditions the make life great. Stupid routines and rules that bring us together and laugh. Doesn’t matter the reason or the time of day – find a way to get together with your people. Look at the smiles on the dudes’ faces. 100% joy. Who wants to start a donut club?

Still The Same: The Chicago Cubs

Cubs fans – and baseball fans in general – have seen this movie before. The Cubs find ways to come up short. Sometimes it’s a cursed goat. Other times the blame falls on a dorky guy in a turtleneck reaching over the wall to snatch a potential out from his home team. This time, it was a better team with a scary-good starting pitching staff and a second baseman out of a Matt Christopher book who can’t stop hitting home runs. This article sums up the 100+ years of heartbreak. D. Francis Berry writes this game summary in the vernacular and stylings of a turn-of the 20th Century sports reporter. It might be a little cute, but it’s the perfect way to to encapsulate the timeless failure that is the Cubs. God love ’em. – PAL

Sometimes I read an article that is not terribly interesting, but I want to share the article because of one passage or quote that is too funny to pass up. This is one such instance: Mets pitcher Matt Harvey was struck on his pitching arm by a line-drive in Game 1 of the NLCS. He was fine and was throwing the ball around a few days later. Mets’ pitching coach, Dan Warthen, was asked how Harvey looked playing catch and Warthen responded: “Very handsome.” Heh. -TOB

PAL: Here’s my Matt Harvey prediction –  his career will mirror Josh Beckett’s in every way. Great stuff, solid success, moments of clutch post-season greatness (don’t forget Beckett threw a complete game shutout against the big bad Yankees, in New York, in the deciding game 6 of the series). Also, at 26, Harvey is already on his way towards mimicking Beckett’s skinny man gut.

The Next Great Fight Already Happened

Tommy is the boxing fan of this duo, but this story has a cool angle to it. Gennady “GGG” Golovkin, a late-bloomer from Kazakhstan, is an unlikely choice to be the next big draw in boxing after Floyd Mayweather’s apparent retirement. Yet, the man has serious power (30 knockouts in 33 of his wins. The more likely “next big thing” would have been Canelo Alvarez. The young, talented boxer’s path to the main attraction seemed to be determined before he was 20. The two boxers, with paths that bear no resemblance, find themselves one last fight from the top before it would make sense for them to square off. They fight would be the main draw in a sport that really needs just that. Turns out, they’ve already fought. There were only a handful of people to witness it, but GGG and Canelo sparred 5 years ago it what might prove to be the preview to an eight-figure fight in the near future. There is a lot of other elements to this story – some I dig and some I don’t mind, but I’m a sucker for the foreshadow story that takes place in some nondescript ring. Boxing is all about the build up anyway, right? I mean, I for one like Rocky’s training montages more than the fights. – PAL

PAL Song of the Week: Ann Peebles – “I Can’t Stand The Rain”

Check out the full playlist with all of our songs here. Play it loud while doing your Saturday chores. You ain’t too old to play your music real loud.

“And then, I look over, and she’s reading J. Crew, which was so weird, because I was such a huge J. Crew person then, too. Still am. We sometime like to go to Starbucks on weekends and take an L.L. Bean catalogue along, and I’ll say, ‘Honey, what’s new?’ And she has 5 minutes to look through and find out what’s new.”