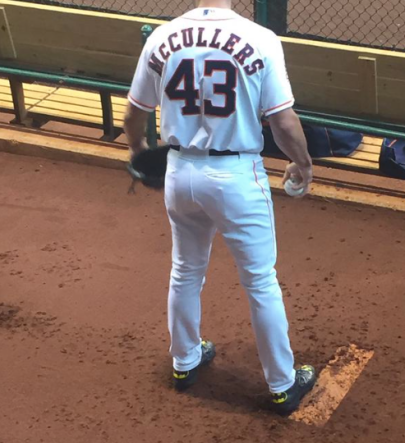 He could’ve been the next Magic Johnson or Penny Hardaway (before the injuries). As a 6’7 point guard drafted 4th out of high school (the only high school guard ever taken in the top 5 of the NBA Draft), Shaun Livingston was a special talent, and then his knee exploded in every possible way when landing after a layup. Torn MCL, ACL, PCL, meniscus, and a dislocated knee. There was legitimate concern that they would have to amputate. All the potential gone, and that makes his presence as a key role player for the Warriors all the more rewarding. Dude came off the bench and scored 18 in game 1 of the conference finals. Those aren’t garbage time stats, either. This guy who was supposed to have it all fought for years when no one was watching to make it back, and he’s done it. It’s easy to think you love something when you’re young and it comes easy; it’s cool when when a story like this happens, and it reveals someone’s work ethic and passion exceeds his potential. -PAL

TOB: It’s hard to know what Livingston’s career would have been. He was part of those fun mid-aught’s Clippers teams with Elton Brand and Corey Maggette (the fact that he missed Darius Miles like ships passing in the night is a shame. Imagine the lobs!). I don’t know about the next Magic or Penny, as Phil suggests. He was closer to a tall Jason Williams – not much of a jump shot, not much of a scorer, but boy – could he pass. My guess is his ceiling is not much more than we’re seeing – it’s hard to be great in the NBA when you can’t shoot. Also, as the article notes, his injury was absolutely gruesome. One of the top 5 worst I’ve ever seen. But I wonder if Shaun would find this article a bit patronizing. The author seems to be saying, “Gee, Shaun, anything you contribute on a basketball court is great, considering.” That being said, I have always enjoyed Livingston’s game, and I am rooting for him.

Law and Order on the Allegheny

As both a sports fan and an attorney, this is an interesting case. Here’s the scenario: On Tuesday, Pittsburgh Pirates slugger Pedro Alvarez crushed a home run deep beyond the stadium in right field, and right into a boat docked along the edge of the Allegheny River.

Shortly thereafter, a man jumped into the boat and took the ball.

A local news station tracked the owner of the boat down and he said that he’d like the ball back. The news station then contacted the local police department to see what they had to say, and the officer they spoke with said that no crime was committed because the passerby only grabbed the ball and nothing that belonged to the boat owner, noting that when balls are hit out of the park it becomes a “free-for-all.”

In law school, I had the pleasure of studying the infamous case of the fate of Barry Bonds’ record-setting 73rd home run, Popov v. Hayashi, (memorialized in the film “Up For Grabs”). An interesting fact that I remember from that case is that MLB considers baseballs hit out of play to be abandoned property. Hence the officer’s legal analysis. However, where this differs from a normal home run or foul ball is that the ball came to rest in someone’s private property – a boat. The passerby then committed a trespass in entering the boat, and took the baseball.

I contacted my dad, who has worked in criminal law for over 35 years, and he agreed with my analysis. Based on common law principles, whether the baseball belonged to the boat owner when the ball landed in his property is unclear, but the man certainly committed a trespass. BOOK ‘EM, DANO. -TOB

PAL: Wait, when did Tommy become a lawyer? Laws aside, you never board a man’s boat without permission.

There is a coveted and limited job out there that pays over $500K and requires no prior experience. On May 18, The Florida Marlins fired Mike Redmond and moved its GM Dan Jennings into the manager role. Although Jennings has several years experience as a baseball executive, the last time he actually coached a team it was of the high school variety. This isn’t exactly an outlier. Currently, there are 10 managers in MLB with no prior managing experience. Most of them are former players – sure – but at no point did they learn how to do the job they currently hold. You can see this happening in the NBA as well. Steve Kerr, Mark Jackson, Jason Kidd, and Steve Fischer never led a team as a coach prior to their current gigs. What gives? Part of it might be a result of better analytics. Another part of it might be organizations loading up in the experience department by way of the assistant coaches. That being said, it’s noteworthy that at the pinnacle of a profession, more and more people are entrusted to succeed at something they’ve never done while being paid a heap of cash in the process. – PAL

“In the minor leagues, you really don’t manage anymore. The minor leagues are set up like: ‘You’re starting, he’s coming in for the fifth, he’s throwing X amount of pitches, let’s make sure these guys play today, let’s give so-and-so a day off.’ Nobody pinch-hits. It’s, ‘Hey, look, here’s your lineup, go get ’em.’ ”

Given that, it makes sense that an aspiring major league manager would not want to waste his time managing in the minors. You are really nothing more than a babysitter in a baseball uniform.

You know who Action Bronson is if you’re a fan of Hip Hop. While incredibly vulgar, he’s also hard to dislike. Here’s an overweight former line chef who’s one of the most talented rappers going today…and has a food show series called “F*&k, That’s Delicious”. He’s also a mega sports fan, so here’s every sport reference from his songs. He’s not afraid of obscure sports references (Jeff Hornacek, Randy Velarde), which makes these even more enjoyable, albeit incredible crude. You’ve been warned, now enjoy. – PAL

TOB: This is pretty great. But I got a beef with Bronson:

The final game was a matchup of aces – Bumgarner vs. Kershaw. It was only May 21, but it was the third time the two have faced off this season. The Giants have won all three games, with Kershaw, the reigning NL Cy Young and MVP, taking two losses and a no decision. The best part of yesterday’s game, though, may have been Bumgarner taking Kershaw deep in the third to open the scoring. It was the first time Kershaw had ever given up a home run to an opposing pitcher. For the series, Bumgarner outscored the entire Dodgers team over three games! With all that said, MLB Statcast is one of our favorites here at 1-2-3 Sports!, and Statcast analyzed Bumgarner’s homer off Kershaw (the distance of the homer at 415 feet with an exit velocity of 105 mph!). I enjoyed it. -TOB

PAL’s song of the week: “My Baby Just Cares For Me” – Nina Simone (and here’s a playlist of all PAL’s Songs of the Week)