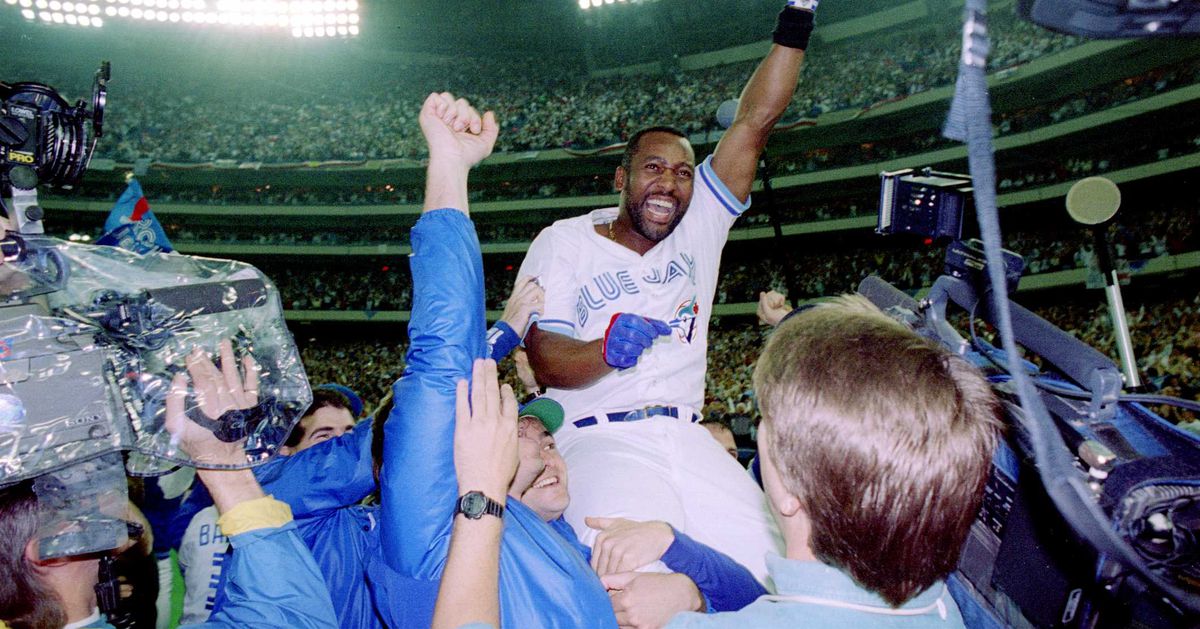 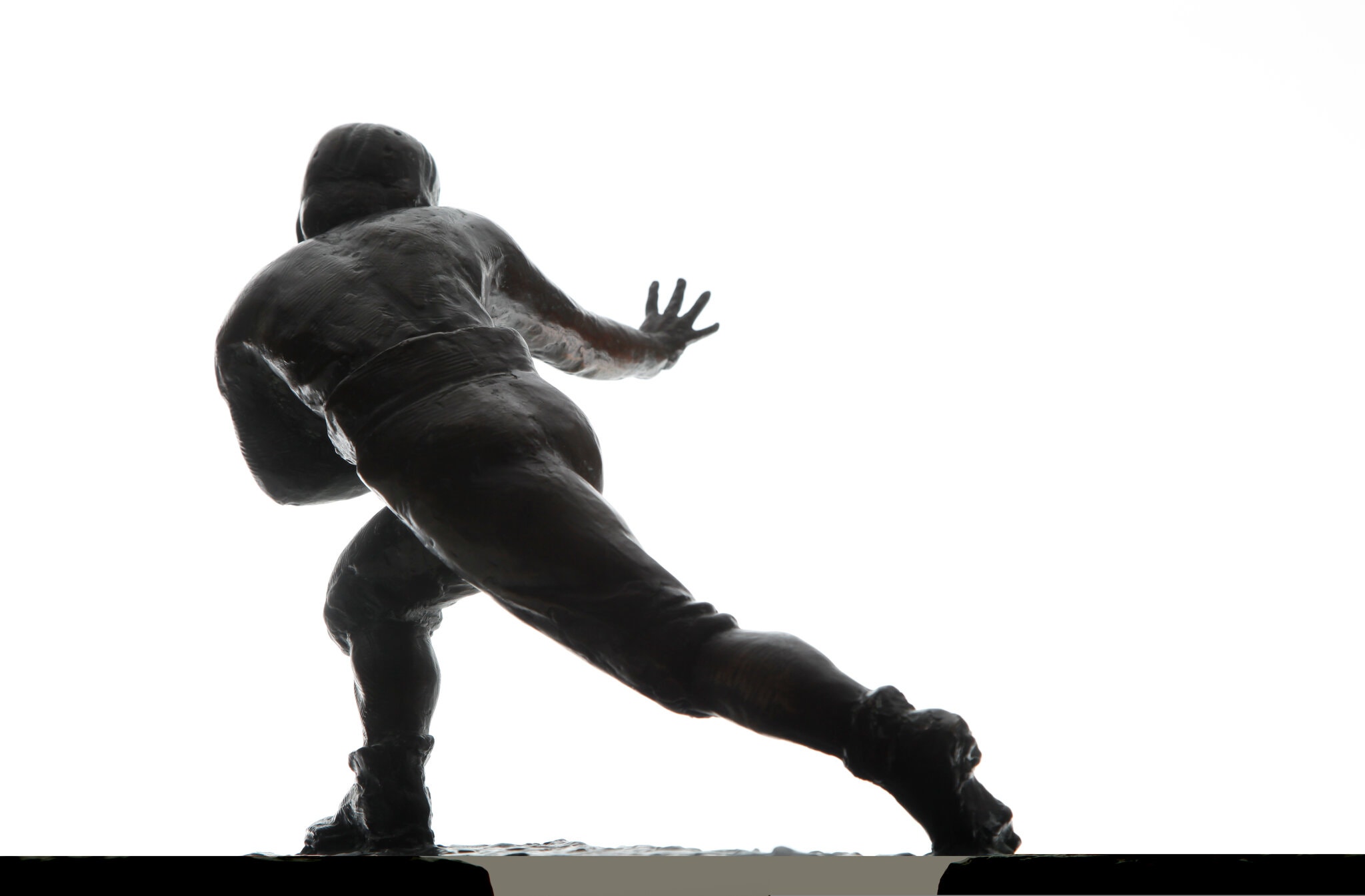 If you haven’t caught Derrick Henry play football, it’s time you tune in. He’s huge (6’4”, 240lb), he’s fast (4.5 40-yard sprint), and in an era when the NFL is going to the air more and more, Henry’s a bit of a throwback. It works. Last year he carried the Titans to the AFC title game.  One of the most effective moves in his repertoire is the stiff arm, all three versions of it.

In the words of Ken Belson, “Henry has made regular use of a move so old-fashioned that it is immortalized on the Heisman Trophy — which Henry won for Alabama in 2015.” This gif is from a recent game (look how much bigger he is than pretty much anyone on the field, by the way), but Henry’s been using his long arms keep defenders off of him since he was in ninth grade, breaking all sorts of records along the way. Bobby Ramsey, Henry’s high school coach, noted that Henry actually has three versions of the stiff arm.

Ramsay, who now coaches at Mandarin High School in Jacksonville, described one of Henry’s stiff arms as a “social distancing” move, where Henry leaves his long arms stretched out in advance of contact, keeping defenders away. Another is the “it’s time to go to bed, son” move where a defender makes the mistake of going for Henry’s waist, only to have Henry push down on the defender’s helmet, like a father patting his son’s head. For the Norman play, Henry employed what Ramsay called the “barroom get the heck away from me” move. It’s a version of the stiff arm reserved for when a defender is already in proximity, and it is not nearly as easy as Henry makes it look. I keep watching that gif above, and I’m also struck by the timing, and placement of the stiff arm. Henry hits the back shoulder, and he drives into the defender right between strides. Force – yes – but there’s a good deal of technique there, too.

Derrick Henry just treated a group of grown men like Apple updates that he keeps clicking "remind me tomorrow" on pic.twitter.com/K4iOwy8VeO

From Ed Smith (the running back actually on the Heisman, which I didn’t know), to John Riggins, to Earl Campbell, and now to Derrick Henry – the stiff arm is in good hands in Henry. Fun article with a lot of good clips, too. – PAL Source: “Derrick Henry and the Art of the Stiff Arm”, Ken Belson, The New York Times (10/23/20)

Sid Hartman died this week at the age of 100. For our Minnesota readers,  I don’t need to underscore just how much of a Minnesota institution the sports columnist was, but it’s been fun throughout the week to revisit or discover stories that help build that institution. Plus, isn’t our duty to share Hartman’s incredible story with the other readers far and wide?

Hell, the man started working in the newspaper business in 1928. His last column was published the day he died. You read that right.

Patrick Reusse – another longtime sports columnist from MN – wrote the obit, and I’ll put Hartman’s sports resume against most anybody in terms of local impact. Jeff Day, who worked with and helped Hartman for the past 15 years, tells a much more personal story. Between Reusse and Day’s words, we get an incredibly unlikely success story that honestly seems too far fetched for a movie, and we also get of a Hartman’s loyalty to a young guy that so desperately needed it.

Call it the Miracle on Portland Avenue: Some Disassembly Required. / Two days after he decided not to come to the office on his 95th birthday, Sid Hartman brought some help to strip down his famed office. / Thank God for Milt. / He helped Sid peel off 70 years of sportswriting history, mostly pictures of sports celebrities, usually with Sid over their shoulder. / Only Milt, who has worked for Sid for 25 years, went up on the ladder. He also serves as Sid's driver, runs his boat and performs any number of tasks for someone legendarily bullheaded and tough to work with. / "I've known Sid a long time," Milt said. "Some days it's fun and some days I want to pull my hair out." / Then Sid interrupted, "Hey, Mr. Preps," he said, aware that I'm the department's move liaison as we ready to leave the building next week. "Can I have another box?" / I noticed that more stuff was being packed up and saved rather than tossed into dumpsters. What are you going to do with all this, I asked. / Standing on the ladder, Milt turned to me when Sid wasn't looking. / "Ever been in his home?" he asked. "Unbelievable." #STMove #startribune #stribmove #Minnesota #onlyinmn #Minneapolis

There are too many incredible details from Ruesse’s obit to quote here, but here are two details I learned about Hartman that were astounding:

Hartman started selling newspapers as a 9-year-old kid, pedaling his bicycle to Newspaper Alley, where he would buy 100 copies of the Minneapolis Star, the Journal, the Morning Tribune or the Evening Tribune for $1.10, then sell them for two cents apiece.

How about this for a different era: he was the GM of the Minneapolis Lakers while still writing for the paper.

In 1947, Hartman took a $15,000 check from Morris Chalfen to Detroit. He met Morris Winston, the owner of the Detroit Gems, at the airport, gave him the check, and the National Basketball League franchise relocated to Minneapolis as the Lakers.

Chalfen’s partner was Ben Berger. Hartman, then 28, was offered the job as general manager, with the stipulation that he quit his newspaper job. He wouldn’t do that, so Max Winter — a former boxing promoter — became the official GM, with Hartman involved in personnel decisions.

“Involved”’ was not a word Sid would use, by the way. He insisted that he made all of the personnel decisions that turned the Lakers into a dynasty in the early years of pro basketball.

Hartman insisted he also had worked a trade with Boston that would have sent veteran Vern Mikkelsen to Boston and brought a chance to draft Bill Russell, the great University of San Francisco center, to the Lakers. Sid told and wrote that story so often it became part of his legend among Minnesotans, even after Boston’s Red Auerbach denied it.

For sure, Hartman and Winter were able to get the NBL’s rights to George Mikan. When they signed the great center early in the 1947-48 season, after his Chicago team had folded, the Lakers were a powerhouse.

The man sat in on meetings to bring MLB baseball to Minnesota, he scooped Notre Dame resignations, watched the last Gopher football dynasty in the 30s after selling his papers outside the stadium. He was a newspaper man, a columnist, but he’d be the first to tell you he wasn’t a good writer. For him, it was about reporting, getting the info, making contacts. The writing was never his focus.

And Jeff Day knows that as well as anyone. Due to his ability to type fast, his first job out of college quickly turned into transcribing audio tapes from an endless supply of Hartman interviews. After two years, Day was laid off. Life got dark for Day:

I used to chain smoke in the parking garage and think, “I’m going to kill myself.” Whatever the thing is that makes people happy and gives them purpose had left me.

Sid called me a year after I was laid off and said, “I’d like to take you out to Murray’s.”

We had dinner and he told me that the paper had an opening and he wondered if I would take it. He wasn’t asking a question. When I went back to work I was employed by the Star Tribune, but I was there for Sid, and it was intensive. Whatever other work I had to do for the paper did not matter to him.

Day kept looking for meaning outside of the office. He became an addict, had legal trouble, relationships, too. But he kept coming to work.

But I kept going to work. Every day. I never missed a day of work with Sid.

I remember once leaning over him at his computer — I can see his face right next to me — and him saying, “Have you been drinking?”

I denied it. He said I was lying. He was right and he never said anything about it again.

When he saw my mother he would tell her, “He’s like a son to me.”

When he saw my father he would tell him, “I couldn’t do this without him.”

My wife sat next to him in the Twins press box and all of a sudden, he was the most charming man on earth.

He came to my wedding dressed better than I was.

And he told me, constantly, that he hoped I wouldn’t leave him for another job.

I never told Sid about any of it.

I didn’t tell him about getting sober or going to years of therapy or regaining some faith in myself.

I just kept going to work.

Of course, I have no idea what kind of guy Hartmas was. To be honest, he was the old guy who’s column I’d skip over as a kid. A lot of “a close personal friend told me” kind of stuff. But reading these two stories are a refresher of his impact. His mark is all over sports in Minnesota – yes – but I can’t help but appreciate his impact on Jeff Day even more. – PAL

SWAG! Stuff we all get. I basically decorated my condo with all of my SWAG.