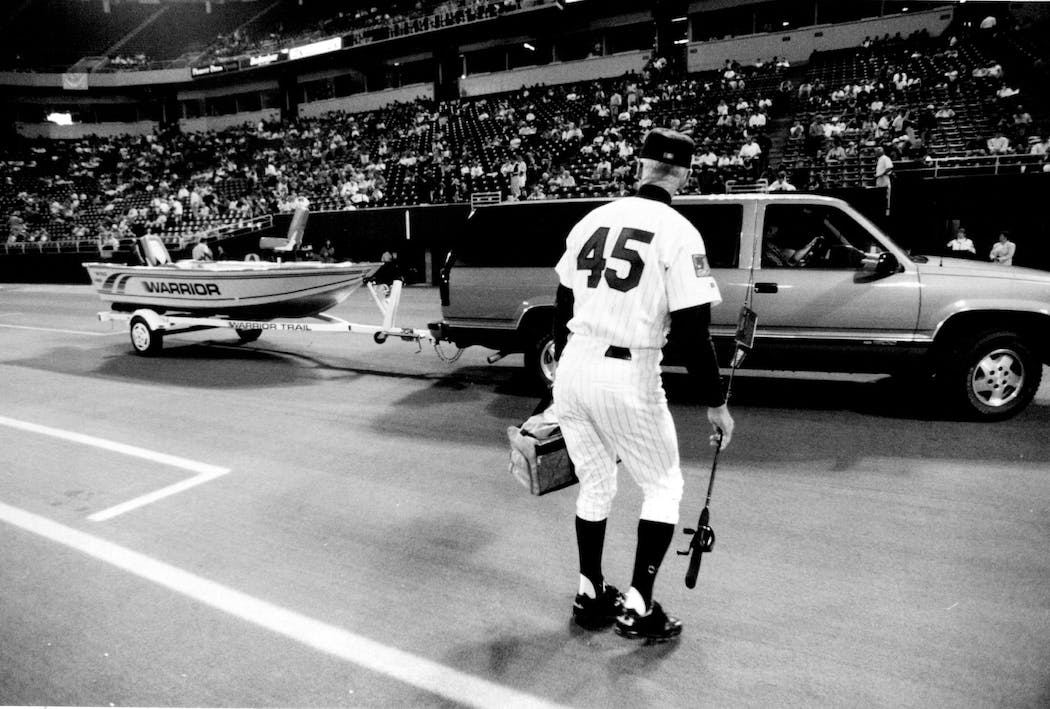 R.I.P. Wayne Terwilliger at 96. 2x World Series champ with the Twins, managed well into his 80s., and recipient of the most MN retirement gift ever. Photo: Marlin Levinson, Star Tribune

His thoughts crashed into one another — about what it would look like and whom it would affect and who would find him. He was alone, alone until the end. At about 8 p.m., in one uninterrupted motion, he leaned to the side, reached out to the coffee table, lifted the gun, pressed it against his right temple and pulled the trigger. That was supposed to be the end of Drew Robinson’s story. Over the next 20 hours, he would come to realize it was the beginning of another.

I cannot recommend this story enough – it’s long, but it grabs you from the very start and compels you to keep reading. I also recommend the quasi-companion story from The Athletic’s Andrew Baggarly, who wrote about Drew’s story from the Giants’ perspective, and it’s also quite the read. -TOB

PAL: “The companion’s voice was unrelenting.” That’s a line that stuck with me after reading this. How exhausting it must be to constantly having that voice telling you that any positive thoughts are b.s., and that all your worst thoughts are the truth. I can understand the hopelessness inside the endless rounds of that mental boxing match.

And then, add to the hopper the constant up-and-downs between the majors and minors, and the absolute head games that must come with that – being so close to reaching the goal, but then being sent back down the mountain a bit, over and over. It’s mentally difficult for someone not suffering from a mental illness, but something like that could add even more weight to the “companion voice”.

I was also blown away by the notion Robinson could play again. First thing I thought – no depth perception…no way he could hit. So I found this section fascinating:

Myint, the eye surgeon, says that the binocular vision two eyes provide matters for up-close depth perception. But hitters typically decide to swing when the ball is about 45 feet from home plate, where depth-perception issues, Myint says, would not necessarily manifest themselves. And because, as a baseball player, Robinson’s brain has already exhibited a unique ability to track high-speed movement, the aptitude he had been showing in all these batting-practice sessions, Myint says, could be very real.

After thinking about it for a second, this makes total sense. All the calculation our brain does to decide whether or not to swing and – if so – where to swing, takes place so fast and so early. It makes total sense that depth perception and that level and speed might not be so important.

Either way, Robinson has a lot of people pulling for him to do the unthinkable and make it back to the bigs, and who knows how many of those folk who read this have struggled themselves? We need to hear more of these stories in order to destigmatize mental health.

Drew Magary nailed this one. Basic premise is that he can remember where he was for most every super bowl, and that memory serves as a dog-ear to who he was. He then proceeds to run through them all. I love it.  Magary has the chops to get an audible laugh out of me. One such moment:

1990 Drew ALSO loved the Gulf War. I remember reading about all the other wars throughout history and being like, “Hey man, when do WE get a war?” And then Bush 41 invaded Iraq at the start of 1991 and I was excited. Genuinely excited. When the news broke, I rushed around school to tell people, like I was a fucking newsboy. When Whitney sang the anthem, I cried for all the wrong reasons.

That’s the good stuff. Perfect.  Many of Magary’s memories land with me. I can smell that dorm room with spitters all over. I know the feeling of rooting against a team for no reason but a gut feeling. You remember the Super Bowls, regardless of the teams playing, and I’m not sure there’s another sporting event for which that’s true.

But this is why the Super Bowl is a holiday. It’s not always a happy one.  But it IS always a signpost in life. As with birthdays and Christmases, you can look back in your Super Bowl Sunday archive and catch glimpses of where you were. WHO you were.

The Nolan Arenado Trade and “The Epidemic of Not Trying”

I don’t know if Marc Carig coined that term, The Epidemic of Not Trying, but it’s a great turn of phrase to describe the widespread tanking across the sports world lately. The Epidemic of Not Trying hit a new low this week, as the Colorado Rockies traded away Nolan Arenado, their franchise player, for…not much. Carig’s article is an expert level takedown of the Rockies’ braintrust – GM Jeff Brdich and owner Dick Monfort.

Most of the scorn is directed at Brdich, and rightfully so. The team signed Arenado to a massive extension just two years ago and then, as Carig put it, “behaved as if this was good enough.” Almost immediately after, Arenado seemed to understand that the team felt that way, that they wouldn’t spend more to improve the team, and the relationship between Arenado and Brdich soured. Brdich seems to think this is perfectly normal, saying, “There are relationships in our human existence that do last forever. But we are human beings in a business where sometimes relationships don’t last forever, and commitments don’t last forever.” As Carig points out, it’s part of Brdich’s job to ensure that his relationship with the team’s star in fact does last, well, not forever, but for as long as that star remains a star, at the very least.  Carig also gives us some insight into Brdich as a person, using Brdich’s own words to show that Brdich is a friggin snob.

Bridich seemingly fancies himself as something of a misunderstood genius. He once boasted that he was “personally blessed with a capacity to not really care what is said about me all that much.” He was referring to the media, whom he deemed unworthy of leveling criticism because, as he explained, “the reality is — and this is going to sound petty and bad — if you just objectively look at the people who are evaluating us every day, you know they’ve never come close to doing this job and all the work that goes into it.” He’s right. I’ll never understand all the work that goes into alienating a franchise player, engaging him in a protracted pissing match, and then packaging him along with $50 million for the privilege of trading him away.

Man, Carig just crushed him. Imagine being stuck with an egomaniac prick like that for your team’s GM. The worst part about this trade for Rockies’ fans is that this is not an A’s or Rays type of trade – trading a top player and getting lots of great prospects back to build for the future. Those fans don’t like those either, but they can at least rationalize it by what you get in return. Here, by all accounts, what the Rockies got back is pitiful – and they still had to pay $50M of Arenado’s remaining salary, as Carig mentioned. Here’s former GM Jeff Bowden’s summary of what the Rockies got:

This trade is a complete disaster for the Rockies outside of the fact they’re saving $184 million of their future payroll obligations. However, they’re also paying $50 million of Arenado’s future earnings with the Cardinals. In return, they only got one of their top 10 prospects in Montero — and he comes with a lot of risk. Gomber was the only sure major-leaguer in the deal for the Rockies and he will help the staff in whatever role they put him in. The other three players in the deal — Locey, Sommers and Gil — are all fringe major-leaguers at best. Not the type of return you’d expect for a superstar. They got nothing close to what the Red Sox got for Mookie Betts, the Indians got for Francisco Lindor or even what the Rays got for Blake Snell. Very disappointing that they decided to dump him just two years after signing him to an eight-year contract. Huge mistake for the Rockies and a horrible return for Arenado.

Imagine being a Rockies fan and reading that. Not only did your team’s best, most fun to watch, homegrown MVP-level player get traded, but you got nothing in return to give you hope for the future. Unlike the Rays, the Rockies aren’t building for the future. They’re just clearing their books. They are Not Trying. If I’m a Rockies fan, I’d be out.  I’m a Giants fan, though, and so while I am not sad to see the Giants’ Video Game Boss, as Grant Brisbee put it, leave the division, it sure will make games against the Rockies less interesting. I mean, I watched this live on TV and howled in disgust before shaking my head in reluctant admiration:

That’s friggin incredible. He could have turned to that crowd like Russell Crowe in Gladiator:

PAL: My favorite player to watch live at Giants games, no doubt. The Epidemic of Not Trying sucks so bad. I love baseball so much, and I know there’s always been the haves and have-nots, but the last few years marks the first time I can remember feeling like a lot of teams weren’t even giving it a go. Why watch a game if one team (or both) doesn’t care if it wins?

I was listening to Jeff Passan (the writer of the incredible Drew Robinson story) on a podcast, and one issue he called out was the need for a new collective bargaining agreement that, in part, addresses two critical issues in baseball:

Absolutely. Baseball needs a major restructuring. Hell, I’ve long been baseball obsessed, and I didn’t watch much baseball at all last year. The casual fan is gone until the World Series, but now the game is starting to lose lifers, and that’s a deathblow to the sport.

Since we’re on the topic, here are 20 defensive highlights from Arenado. Maybe I’ve watched more than once. Man, he’s good.

Congrats to my brotha Freddy V! Kyle old ass couldn’t do it. Glad you did champ! Been telling you!

“The IT tech guy and me…did not get off to a great start.”